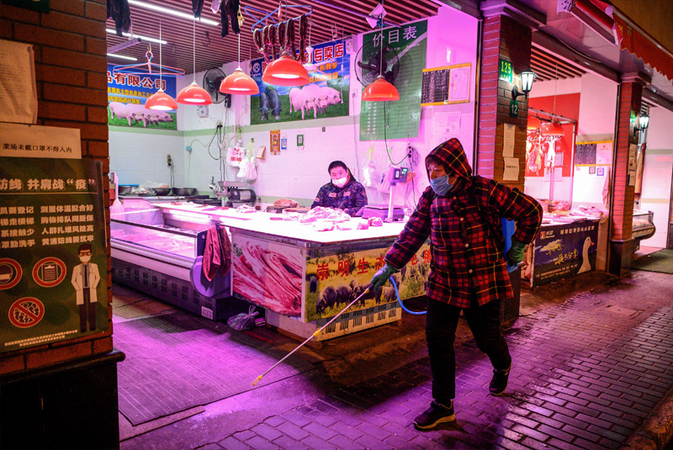 BEIJING - In the remote subtropical hills of southwest China, 80 miles from the Laos border and 1,200 miles from the heart of the coronavirus outbreak in Wuhan, Yao Tonghua is facing a serious cash crunch.

Yao borrowed heavily two months ago to put down $10,000 for a five-story building she hoped would become a palace of Sichuan cooking. Then came the epidemic. Her seven cooks now lounge around empty tables meant for 100 diners. Vegetables rot in the yard. Fish bob inside tanks, neglected.

"I thought the disease was confined to Wuhan and would have little impact on a small and far-flung city like ours," said Yao, who is contemplating laying everyone off and selling the restaurant to stem mounting losses but is worried she wouldn't find a buyer. "This is getting more and more hopeless by the day."

Several weeks into an epidemic that brought the country to a standstill, Chinese officials and economists are increasingly worried about the devastation wrought on a crucial part of the economy: restaurants and retailers, karaoke halls and family-owned factories - countless small and midsize businesses that collectively employ 80 percent of China's workers and produce 68 percent of the country's business revenue.

"Only 30% of small and medium businesses nationwide have resumed work," Shu Chaohui, an official at the Ministry of Industry and Information Technology, told reporters Tuesday. "It's a pretty severe situation."

How severe is it? A nationwide survey led in February by Peking University found half the country's small businesses will run out of cash within three months, and 14% might not survive past mid-March. Unlike large state conglomerates or multinational companies that could weather the storm, China's small businesses say they simply do not have cash reserves to continue paying wages and rent.

And while manufacturing giants that mass-produce gadgets such as Apple iPhones can rely on the government to charter buses and trains to shuttle migrant workers back to their factories, nearly 40% of smaller businesses say they cannot get their workers back to Chinese cities, because of transportation bottlenecks and quarantine restrictions, according to the Peking University study.

The Chinese government has been trying to prop up these small, vulnerable businesses - but with uncertain consequences. Ministries and bank regulators have been pressuring banks to extend loans to cash-strapped businesses. They have asked lenders to push back repayment deadlines or look the other way when payments are late. They have also waived requirements for businesses such as paying for social security.

Beyond that, experts say, policy options are limited when swaths of the country are effectively under lockdown and a cloud of anxiety. People simply do not want to go out and spend.

"If people don't eat at restaurants, that doesn't just affect the restaurant but also the seafood supplier or farmer. If people don't shop for clothes, that affects the silkmaker and weaver," said Dai Ruochen, a Peking University economist who helps lead the survey group. "The economic impact isn't contained, it sends ripples up level by level."

Then there is the effect on employment. In recent weeks, companies across the country have posted online notices apologizing to customers for closing and to employees for mass layoffs.

In the once buzzing metropolis of Shenzhen, Cao Tianfei closed a roast-fish restaurant and paid a $36,000 penalty to break his rental contract in a mall that was shut down for two weeks in February. He laid off 15 workers.

"I felt like I abandoned my kids," he said. "But I had no choice. Every morning I wake up, rent and salaries just get sucked out of me."

Cao said the unpredictable nature of the epidemic had scrambled his planning. "I've never considered borrowing money from the bank, because I can't see the end of the virus," he said. "Even if it ended today, it would still be a long way for us to get out of this."

To counter the uncertainty, China's leaders have tried to project calm. National authorities have set a late-April target for the virus to be fully contained, and a central-bank official took to international media to tout how China has rolled out no less than 30 policy measures, many of which specifically target "small and micro" businesses, to ensure a quick rebound.

"The most likely scenario is a V-shaped curve, which means a decline in economic activities followed by a rapid recovery, with the total economic impact relatively contained," People's Bank of China deputy governor Chen Yulu predicted in a Financial Times op-ed.

But there are risks to China's desperate attempt to restart its economy, and many businesses will inevitably die off, economists predict.

Chinese authorities' hands are tied when it comes to asking banks to forgive late payments or issue even more risky loans to bail out faltering businesses, said Andrew Collier, a managing director at Orient Capital Research who frequently speaks to Chinese bank executives.

The coronavirus hit at a time when many Chinese banks were already wobbling with bad loans and households and businesses were burdened by massive levels of debt.

China's leaders "are trying to straddle between having an economic meltdown and crashing the banks," Collier said. He added, "They will rather let some businesses go belly up than watch banks collapse."

Across the country, a few small businesses are hoping to survive by creative means rather than government bailout.

Owspace, a chain of bookstores and cultural spaces that is popular with China's urban literary and art crowd, is asking book lovers to make online donations of between $7 and $1,100 as revenue plunges 80 percent. Expatriates in Beijing recently launched a GoFundMe crowdfunding campaign to raise $330,000 to save Comptoirs de France, a long-established bakery chain with 16 locations.

Holed up in an apartment in Wuhan, Zuo Weiwei, an entrepreneur who has been selling cosmetics and nutritional supplements online, said the congestion and breakdown in China's shipping industry forced her to end her business.

"Dozens of customers who had preordered products from me asked for refunds," she said. "I simply couldn't take it anymore."

Hundreds of boxes of beauty masks, dietary supplements and silver-coated Buddhist amulets lay piling up in her house. Under these circumstances, Zuo said, she is drastically downsizing her ambitions.

"I've given up hopes of selling stuff and making a fortune," she said. "My wish for this year is for me and my family to stay healthy and not get infected."