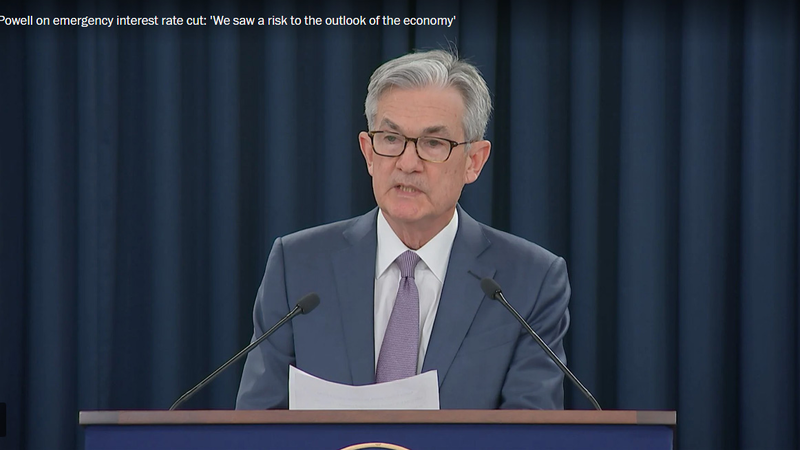 WASHINGTON — The Federal Reserve on Tuesday took the emergency step of cutting the benchmark U.S. interest rate by half a percentage point, an attempt to limit the economic and financial fallout from the coronavirus.

The U.S. central bank has not made a cut like this since late 2008, shortly after the collapse of Lehman Brothers. Fed leaders believed it was wise to move quickly as concerns mount about the plunging stock market and a severe economic disruption in every major economy. Recession fears in the U.S. have spiked in the past two weeks.

"We saw a risk to the outlook of the economy and we chose to act," Fed Chairman Jerome Powell said at a news conference shortly after the rate cut announcement.

The economic concerns have picked up. Many U.S. companies initially scrambled to reroute manufacturing supply chains because their China suppliers were shuttered.

But a broader worry has emerged as many U.S. businesses are prohibiting work-related travel, fearful of health risks. And there's a fear that consumers will pull back on their own expenditures as the virus spreads, schools are shut down and the stock market swings. This kind of sharp pullback could derail what had been steady economic growth, leading companies to cut workers and investments, and creating a drag that is hard to arrest.

The Fed's action reduced the U.S. interest rate to just below 1.25%, down from about 1.75%. Fed leaders voted unanimously in favor of the rate reduction, and Powell tried to project a sense of calm during the 13-minute news conference. He said repeatedly that the U.S. economic fundamentals still look healthy, but he noted that "sentiment" had shifted. The cut led to a brief stock market rally, but it was short-lived.

The Dow Jones industrial average ended the day down nearly 800 points, and the bond market flashed a warning sign as the yield on the 10-year U.S. Treasury bond fell briefly below 1% for the first time ever.

Economists have warned that the coronavirus is suddenly shaping up to be the biggest risk to the global economy since the financial crisis. Growth this year is expected to slow sharply, even if a recession is avoided. Goldman Sachs has projected that economic growth in the United States could stall in the second quarter, which runs April through June.

The Fed's move is one of several that policymakers have discussed in recent weeks. Congress is preparing a $7.5 billion emergency funding package to help with the costs of fighting the epidemic. President Donald Trump on Tuesday called for new tax cuts and an even bigger Fed rate cut to stimulate the economy. Treasury Secretary Steven Mnuchin, meanwhile, said they would consider an infrastructure package and regulatory relief for banks, but discussions appeared to be in early stages.

He criticized the Fed for not doing more on Tuesday, but there are limits to what the central bank can achieve, especially with interest rates already low. Also, the economic shock is causing many people to stay home, regardless of how available cheap credit is.

"You are not going to slay a disease by lowering interest rates," said Bernard Baumohl, chief global economist at the Economic Outlook Group. He compared to the Fed's cut to "placing a Band-Aid on an arm to cure a headache."

Powell acknowledged that the Fed can't come up with a vaccine or fix a broken supply chain that's disrupted by the outbreak in China, but he believes the rate cut will help protect the economy from a rapid downturn.

"We don't think we have all the answers, but we do believe our action will provide meaningful support to the economy," Powell said. "It will support accommodative conditions and avoid a tightening of financial conditions, and it will help boost household and business confidence."

While some worry that Powell caved to Trump, many economists and investors thought Powell made a mistake by not using his news conference to stress that the Fed would act again, if needed.

"The Fed's action today is better than nothing, but it's not quite what the doctor ordered," said George Selgin, a senior fellow at the Cato Institute and close Fed watcher. "Powell needed to give markets a more certain sense of the Fed's willingness to move rates further as necessary."

Powell left the door open to another rate cut, but he stopped far short of promising action. He once again dismissed the idea that the Fed is caving to Trump's wishes.

"We're never going to consider any political considerations whatsoever. And it's very important the public understands that," Powell said.

Many economists blame the White House and Congress for being slow to respond to the crisis, thereby forcing the Fed to step in with its blunt instruments at a time such as this.

"We need to know the extent of the virus in the U.S. We are not even doing broad-based testing. We don't know where this is or who has it. The uncertainty is so high right now about the most basic things, and that's weighing on the economy," said Julia Coronado, a former Fed economist and founder of Marcopolicy Perspectives.

In contrast to Trump, Mnuchin praised the Fed's action on Tuesday, telling Congress, "They did the right thing getting ahead of this. . . . I applaud the Fed on this move."

Earlier Tuesday morning, global finance ministers held a call to discuss the economic unrest, but they stopped short of announcing any joint steps. In the 2008 financial crisis, G-7 finance ministers announced "urgent and exceptional action" to bail out the banks. Shortly after the Tuesday call, however, the Fed made its announcement.

The Fed's move followed Australia's central bank, which cut interest rates to their lowest level ever. Trump had demanded that the Fed follow suit.

"Australia's Central Bank cut interest rates and state it will most likely further ease in order to make up for China's coronavirus situation and slowdown. They reduced to 0.5%, a record low. Other countries are doing the same thing, if not more so. Our Federal Reserve has us paying higher rates that many others, when we should be paying less," Trump tweeted. The Fed "should ease and cut rate big."

Lowering interest rates makes it even cheaper to borrow money, but it does not address the root cause of the current concern in financial markets.

Trump also called for a one-year reduction in payroll taxes, which would be an immediate boost to the paychecks of working Americans if approved by Congress. Payroll taxes are used to fund Social Security and Medicare and have been reduced in past times of economic trouble, including after the most recent financial crisis.

While Democrats have been highly critical of the 2017 GOP tax cuts, some Democratic lawmakers might be open to payroll tax cuts. About 75% of U.S. taxpayers do get assessed the payroll tax, according to the nonpartisan Tax Policy Center. Americans pay payroll taxes on income up to $137,700, so a cut would not have an impact on any income above that level.

"I don't think tax cuts are the answer to every problem," Hoyer told reporters.

But he left the door open to some sort of fiscal stimulus in the future if the economy falls deeper into peril due to the virus' spread.

"That may or may not be what we would do," he said of a potential stimulus, saying Congress would remain "focused on . . . trying to keep the economy stable and growing and keep people employed."