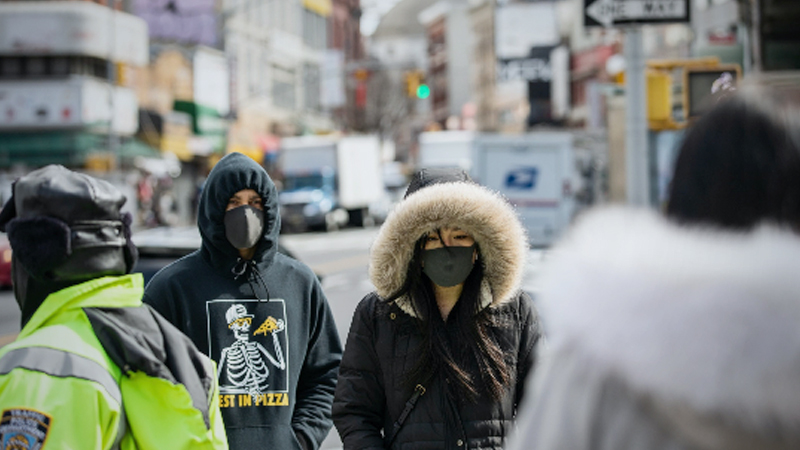 The report, published by the Bureau of Labor Statistics, offer the snapshot of an economy that was relatively strong in the days leading up to the coronavirus's spread into the United States.

The unemployment rate in February fell slightly to 3.5 percent, near a 50-year low. The outstanding growth was driven by gains in health care, restaurants, government and construction hiring. But many investors and business executives are more concerned about the future.

Wall Street ended its tempestuous, week-long coronavirus ride on Friday with all three major stock indexes in the red for this year and investors continued to flee to the safety of government bonds because they are unsure what the virus's impact on the economy will be.

"The employment report was nearly perfect in February before the growing economic storm posed by the spreading coronavirus around the country that threatens many industries where the public gathers from movies, to travel, to the airline industry, even shops and malls," Chris Rupkey, chief financial economist of MUFG Union Bank, wrote in a commentary Friday.

President Donald Trump heralded the "tremendous" jobs report while he signed Congress' $8.3 billion emergency coronavirus spending package. He said the jobs report was evidence of the country's continued economic resilience in the face of the outbreak. But as he spoke, White House officials were considering targeted steps to help the airline, travel, and cruise industries stabilize after many Americans have canceled trips because of concerns about the virus's reach.

Over the past few weeks, experts have gone from sanguine to increasingly alarmed about the virus' threat to global growth, as the outbreak has spread to nearly 90 countries and sickened more than 100,000. Global markets have shown volatility and fallen sharply as investors monitored the coronavirus' dampening effect on manufacturing, travel and consumer spending. Analysts are predicting global growth could slow to the lowest levels since the financial crisis this quarter.

The price of oil dropped sharply Friday as talks between OPEC and Russia over production cuts collapsed without a deal. Brent crude was down 8 percent, to about $46 a barrel by late morning Eastern time.

"This is an existential threat to many oil companies if the price per barrel doesn't stabilize and go higher," said John Kilduff of Again Capital. "Many of the companies are unprofitable when oil prices are under $50 per barrel. They will drop like flies over the course of the second half of the year if prices don't move higher."

Stalled production at Chinese factories has dealt blows to toy makers and electronics manufacturers alike, many of whom were already dealing with the unpredictability of President Trump's trade war with China. Earlier this week, the Federal Reserve took the unusual step of cutting the benchmark U.S. interest rate by half a percentage point, to get ahead of economic and financial fallout from the coronavirus.

As investors have largely fled global stocks in the past two weeks, many have piled into the safety of U.S. government debt, which pays a low yield but also carries low risk. At its current price, the 10-year Treasury bond is paying less than 1 percent interest. The 10-year note is a crucial global financial measure that can be an indicator of future economic health, as well as a marker for mortgage rates and car loans.

"The low yield on the 10-year Treasury is a sign that the investors are very concerned about future growth in the economy," said Eric Jacobson, senior fixed income research analyst at Morningstar. "That's what happens. When people are worried about everything else, they run to Treasurys because they know they are going to get paid back."

The labor market data showed just how far the economy had come before the coronavirus outbreak began taking its toll. Temporary jobs, which may have been one of the first employment areas impacted by the coronavirus, declined by 3,300 in February.

The fresh February data shows that women continue to outnumber men in the workforce, a threshold which was crossed in December for only the second time in history.

Wage growth continued to climb, with workers seeing their average hourly earnings rise 3 percent in the past year.

Still, economists are worried about the leisure and hospitality industries going forward. Chinese tourists are suddenly missing from major tourist destinations, and Visa warned of a significant blow to profits from reduced travel and tourism to and from Asia. Global airline stocks have shed $41 billion in value, or 25 percent of the sector's market cap, in the past month. The International Air Transport Association is predicting an 11 to 19 percent drop-off in global passenger revenue this year, driven by falls in airfreight and cargo.

"Many of these industries, such as leisure and hospitality, are among those most likely to be affected by the coronavirus and related fears," Nick Bunker, economic research director at Indeed, wrote in a commentary. "This forward momentum could help these industries weather this shock, but also raises the possibility that job growth may slow significantly if the impact of the virus hits these industries hard."

Industries with large numbers of workers who can do their jobs from home are less likely to be impacted, said Julia Pollak, ZipRecruiter's labor economist. In the past three years, ZipRecruiter, an online employment marketplace, has seen the share of job postings that offer work from home increase 40 percent.

"We're about to see a major experiment in increased work from home," Pollak said. "Work that's not based on person-to-person service provision, as with manicures, teaching or nursing, may not be affected at all."

Analysts had predicted an uptick of 140,000 to 170,000 jobs. But some of these big gains are expected to be lost in the months to come if the coronavirus outbreak doesn't end soon.