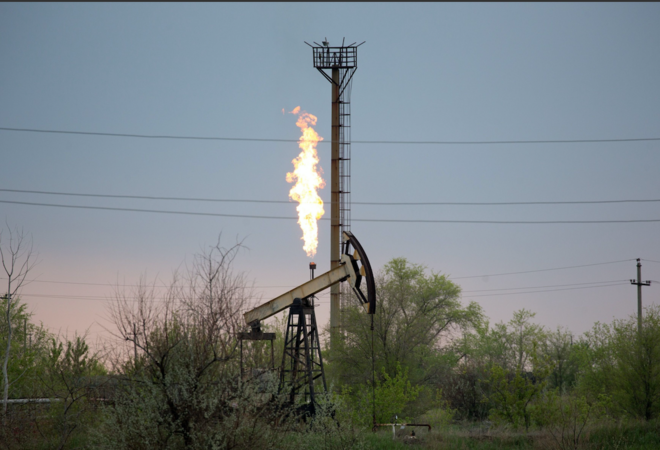 An oil pumping jack, also known as a 'nodding donkey' and flare stack in an oil field in Russia. MUST CREDIT: Bloomberg photo by Andrey Rudakov.

For years investors were willing to pay more for shares of natural gas utilities compared to electric ones. That's no longer the case.

In the past few days, electric utility valuations blew past those for gas, a sign that investor confidence in the future of fossil fuels has reached a tipping point. With climate advocates pushing to eliminate natural gas from homes and businesses and lawmakers from New York to California taking a stand against greenhouse gas emissions, pipeline developers are facing an uncertain future.

"Right now, anyway you look at it, natural gas is not seen as something that is very friendly," says Shahriar Pourreza, an analyst at Guggenheim Securities.

The natural gas discount is a reflection of the fuel's dimming long-term prospects. The near term, however, still looks bright. In the absence of easy-to-source, low-cost alternatives for essential tasks such as heating, cooking, and manufacturing, natural gas seems destined to remain a primary source of energy in the U.S. for years to come. Hydraulic fracturing has made gas extraordinarily cheap and plentiful, and its use as a substitute for dirtier coal in power generation has allowed utilities to slash carbon emissions by a quarter in the past decade. It's also able to keep the grid stable when wind and solar farms aren't producing.

For these reasons, defenders such as BlackRock say gas should have a long life as a bridge to clean energy. The world's largest asset manager sees the fossil fuel as part of a long-term energy transition and calls the constraints imposed on development "few and far between," according to Mark Florian, head of energy and power infrastructure funds. "My sense is it hasn't really impacted natural gas company valuations at this point, but I think that's a risk to monitor."

With dozens of cities across the U.S. enacting bans on new gas infrastructure, however, a decline appears inevitable. In addition to climate concerns, a series of gas leaks and fires over the past two years including a 2018 deadly blast in Merrimack Valley, Massachusetts, sparked concerns about safety that led investors to question whether gas companies should be really trading at a premium, according to Pourreza.

Ryan Kelley, who manages a gas utility fund at Hennessy Funds, says higher uncertainty has probably eroded the valuations of natural gas companies even as their earnings growth should remain robust in the foreseeable future. "People are getting a little bit ahead of themselves in trying to figure out what the long-term implications of this is," Kelley says.

For now, electric utilities are themselves still the largest users of natural gas. But as Joseph Sauvage, head of Citigroup Inc.'s global power group, pointed out at an S&P conference in New York last month, they're also better positioned to benefit from the societal shift toward favoring investment in renewables, energy storage, all-electric construction, and electric vehicle-charging infrastructure. "Some think these companies are having lot more opportunities now that electrification gets closer," Sauvage says.

Prospects for natural gas companies seem to be narrowing not only in the U.S. but also in Europe as the bloc vows to slash carbon emissions in the next few decades. European electric utilities including powerhouses Enel and Iberdrola are also trading at a premium to gas companies. "With policy in the continent moving toward low carbon emissions, you need to tell your shareholder that you are investing in decarbonization, rather than saying you are funding a gas pipeline," says Elchin Mammadov, a European utilities analyst at Bloomberg Intelligence. "The growth prospects in power are much higher than in natural gas."