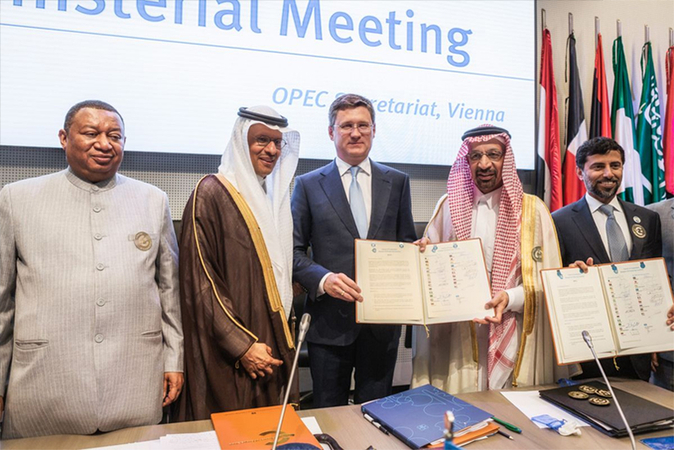 OIL-COMMENT: Friday's gathering of oil ministers from the Organization of the Petroleum Exporting Countries and their international allies broke up in disarray. The collapse of talks reveals deep divisions over how to deal with the slump in oil demand triggered by the spread of the covid-19 virus.

Saudi Arabia demanded that Russia share in a proposed reduction of a further 1.5 million barrels a day, insisting that OPEC wouldn't reduce supply without the support of non-members. Russia demurred. Maybe Vladimir Putin just didn't like being told what to do by a 34-year-old prince who's run his country for about as many months and his older brother who's been energy minister for just half a year.

What's become clear is that by making any OPEC output cut dependent on the participation of non-OPEC allies, the group effectively cemented Russia's full control over the whole process of supply management, as I warned more than a year ago. This isn't the first time OPEC+, which controls almost half of the world's oil production, has been an uneasy partnership, but it is by far the most damaging. The partnership remains on life-support.

But this meeting was not just about making a further output cut. It was also meant to ratify an extension of the current agreement between the 20 nations to remove as much as 2.1 million barrels a day of oil from the market. That deal, reached in December, expires at the end of this month, leaving members free to pump as much as they wish from April 1.

And that's just what Saudi Arabia is gearing up to do. State-owned oil monopoly Saudi Aramco, delayed setting official selling prices for April after the meeting collapsed. When it published them on Saturday, it slashed its flagship Arab Light crude by the most in 20 years, signaling that it may try to push as many barrels into the market as possible.

Bad as they are, things may not be quite as bad as some fear. Don't expect the full volume of OPEC+ cuts to return immediately and swamp the market. Most members are already pumping at, or close to, capacity. Aside from Saudi Arabia, which could add more than 1 million barrels very quickly, the only other countries with the ability to boost output by more than 100,000 barrels a day are the United Arab Emirates and Russia.

Russia didn't reject further output cuts just because its oil companies are reluctant to pump a bit less out of the ground. After all, they haven't exactly stuck to their commitments so far, and at the last meeting they even secured an exemption for condensates - volumes of light oil extracted from gas fields - which is one of the areas of growth in Russian output. Had they wanted to do so, there was plenty of room for Russia to accept an output cut and implement it only in part, if at all.

One reason for refusing to play ball may be disagreement over how best to deal with a sudden sharp, but temporary, drop in oil demand. By allowing oil prices to fall, the Russians may be hoping to spur demand. It's difficult to see that having much impact on consumption, though, when factories are closed, airlines are slashing flights and roads are emptying. Cheap oil won't ease fears of the covid-19 virus.

But it may encourage countries like China and India to build up their strategic stockpiles. Both are creating buffers along similar lines to the U.S. Strategic Petroleum Reserve to protect themselves from any future supply disruptions. China already seems to be pouring vast amounts of crude into storage tanks and underground caverns.

Flows of crude from the Persian Gulf nations are down from their record October level, but they're still pretty much on trend with shipments since the start of 2017. Volumes from West Africa are holding up, too. And amid the collapse in its oil consumption, China has emerged as the biggest buyer of crude from the Kurdish region of Iraq. It took four out of every 10 barrels shipped last month after buying nothing from the region as recently as October.

But there is also a bigger geopolitical dimension to Russia's withdrawal from the output-cutting pact, just as there was to its joining. Participation served Putin's ambitions to rebuild Russia's influence in the Middle East. Withdrawal is aimed at punishing the U.S. for its repeated attacks on Russia's energy interests through sanctions, which have stifled Arctic offshore exploration and shale development, prevented the completion a gas pipeline to Europe under the Baltic Sea, and targeted the Venezuelan business of Russia's state-oil producer Rosneft.

Saudi Arabia led OPEC in a war on shale in 2014, when it introduced the pump-at-will policy. It failed then, capitulating as oil prices collapsed a year later. But U.S. producers from Exxon Mobil Corp. to Continental Resources Inc. are already being hammered and now may be a more auspicious time to launch an attack.

Even if it fails again, Russia intends to make sure that U.S. oil companies share the pain of the collapse in oil demand. Saudi Arabia appears wiling to help it. The next few months will be ugly.

This column does not necessarily reflect the opinion of Bloomberg LP and its owners.

Lee is an oil strategist for Bloomberg. Previously he worked as a senior analyst at the Centre for Global Energy Studies.