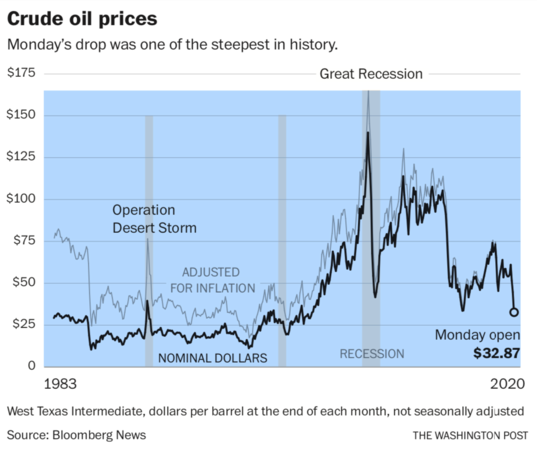 By The Washington Post · Steven Mufson, Will Englund · BUSINESS, US-GLOBAL-MARKETS

The oil price war Saudi Arabia launched against Russia over the weekend sent crude prices into one of the steepest falls in history Monday, causing casualties for oil field workers, U.S. shale drillers, investors and members of the Organization of the Petroleum Exporting Counties that rely on oil to make their budgets add up.

Moscow's refusal to cut its oil output by half a million barrels a day shattered the unusual three-year marriage of OPEC, led by the Saudis, and major non-OPEC producers, led by Russia, as oil producers scrambled to find a way to respond to weakening global demand resulting from the deepening crisis over the coronavirus.

Saudi Arabia, angered by Moscow's position, said Sunday that it would open its spigots and drive down prices, making this oil price cycle the only one in nearly a century to combine weak demand with a global price war.

Global markets opened down sharply Monday, with the leading benchmark varieties of crude tumbling more than 20 percent after other big falls in recent weeks. The drop was the steepest since prices plunged 35 percent Jan. 17, 1991, the day the U.S.-led coalition launched Operation Desert Storm to force Iraq to withdraw from Kuwait.

The plunge in prices, however, will also benefit consumers who should see markedly lower prices at the pump. For them, the price war will act like a tax cut, putting more money in the pockets of motorists.

"I consider this as a $1 trillion stimulus to the world economy with a $30 oil price decline," Scott Sheffield, chief executive of Irving, Texas-based Pioneer Natural Resources, one of the biggest independent oil companies, said in an email.

Is the oil world big enough for two swing producers?

President Donald Trump weighed in on Twitter about the plunge in oil prices, noting that lower prices were "Good for the consumer, gasoline prices coming down!" The president also tweeted that "Saudi Arabia and Russia are arguing over the price and flow of oil. That, and the Fake News, is the reason for the market drop!"

Sheffield said Pioneer is secure, but other companies plying the vast shale in places such as North Dakota, Oklahoma and Texas will face difficulties.

"We are preparing for two years of low prices and will make the necessary adjustments to maintain our great balance sheet," he said. But, he added, "there will be many bankruptcies in our industries and tens of thousands of layoffs over the next 12 months."

Investors pummeled a broad range of stocks Monday. By midmorning, shares of Pioneer, Continental Resources and oil service giant Schlumberger were all down 35 percent. Shares of the major international oil companies were down 7 to 17 percent.

Oil demand will decline for the first time since 2009, the International Energy Agency said Monday, revising its earlier forecasts. The IEA said that global demand will shrink by 2.5 million barrels a day in the first quarter of the year.

"This is the first time since 1930 and '31 that a massive negative demand shock has coincided with a supply shock," Robert McNally, president and founder of the Rapidan Energy Group, said in an email. "It's sort of like a black swan to simultaneous hurricane event."

McNally, who served on President George W. Bush's national economic and security councils, said that in late 1930, giant fields in Texas started up "right into the teeth of the Depression, sending oil prices down to pennies on the barrel. This ultimately forced Texas to send troops into the oil fields, and that was the beginning of decades of strict oil quotas."

The weak conditions for oil led some investment houses to reassess the ratings of OPEC countries, especially those with large populations such as Nigeria. Fitch Ratings said that many of those countries were "still struggling to adjust" to the fall in oil prices in 2014. It said that for those countries to balance their budgets, which rely heavily on oil revenue, they would need "break-even oil prices well above current market rates."

But most of the places that will be hurt worst by the crash in prices will be the U.S. shale fields, where costs are substantially higher than the giant reservoirs of Saudi Arabia or Russia. Thanks to technological advances and untapped shale layers, U.S. oil and natural gas output has soared, insulating the U.S. economy somewhat and easing price pressures worldwide. Texas now produces more crude oil than Iraq, and production has also increased in states such as North Dakota and Oklahoma.

But the higher costs and the short lives of shale wells - usually 18 to 24 months - make the U.S. fields more sensitive to lower prices. Sheffield said he expects U.S. shale production to start declining in the third quarter of this year and to fall more than 1 million barrels a day in 2021. And the number of wells operating onshore in the United States is already down 25 percent from a year ago, according to the authoritative Baker Hughes rig count.

"No question U.S. shale producers will experience collateral damage in this price war between Russia and Saudi Arabia," McNally said. "They were already under enormous pressure, and supply growth was set to taper off sharply by the end of the year. So they had pneumonia and just got hit with the coronavirus."

This isn't the first time Saudi Arabia has sought to punish other oil exporting countries for expecting the kingdom to act as the sole swing producer, cutting its own output while other exporters benefit. In the 1980s, Saudi Arabia drove down prices to less than $10 a barrel.

"From time to time a price bust serves to instill discipline and remind producers of the importance of collective supply management," McNally said. "Since the early 1980s episode, when Saudi Arabia's production fell to 2 million barrels a day, the kingdom is unwilling to be the sole swing producer, especially when huge cuts are needed." Saudi production capacity is about 12 million barrels a day.

"The new price war is between Saudi and Russia. It is NOT about shale," said Pavel Molchanov, senior energy analyst at the investment firm Raymond James. "They pretended to be allies for three years, and now the pretense is over."

Molchanov said that the spat between the two giants was "partly economic" but also political, with differences over Iran and Syria, both foes of the Saudi regime but both on good terms with Moscow.

Nonetheless, Russia, which has been working to expand its influence in the entire region, had taken part in an earlier production cut in cooperation with the cartel, one that began in January and is due to expire at the end of March. Last fall, Russian President Vladimir Putin made a much-publicized visit to Riyadh as the two countries were trying to improve ties beyond the energy sphere.

"To the extent that there is silver lining, it is this: Saudi cannot keep this going for long," Molchanov said. He said that the kingdom needs $80 a barrel oil to balance its fiscal needs, and while Saudi Arabia has large reserves, current price levels are "not even in the ballpark of what would sustain its economy."