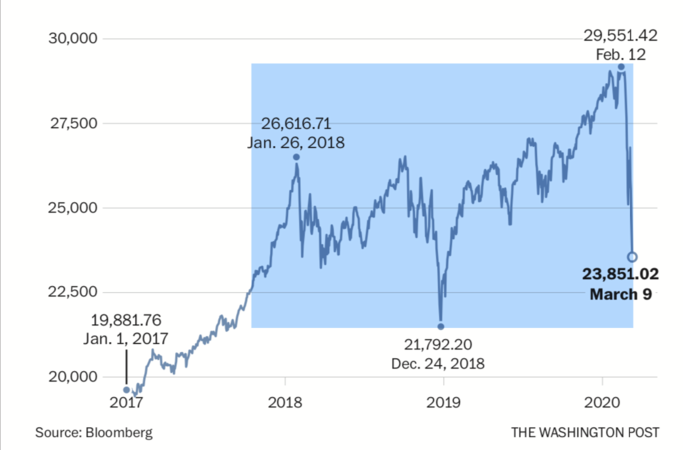 The coronavirus outbreak fanned new fears of a worldwide recession on Monday, as well as an all-out oil price war, sending stock markets spiraling down to new record lows not seen since the 2008 financial crisis.

The Dow Jones industrial average shed 2,014 points, or 7.8%, on Monday, the largest decline since the financial crisis. Stocks fells so sharply, that they tripped a so-called "circuit breaker" that halted trading for 15 minutes. Oil prices tumbled 24%, its worst day since the 1991 Gulf War, as the coronavirus weakens demand for fuel, with Saudi Arabia and Russia refusing to scale back production. 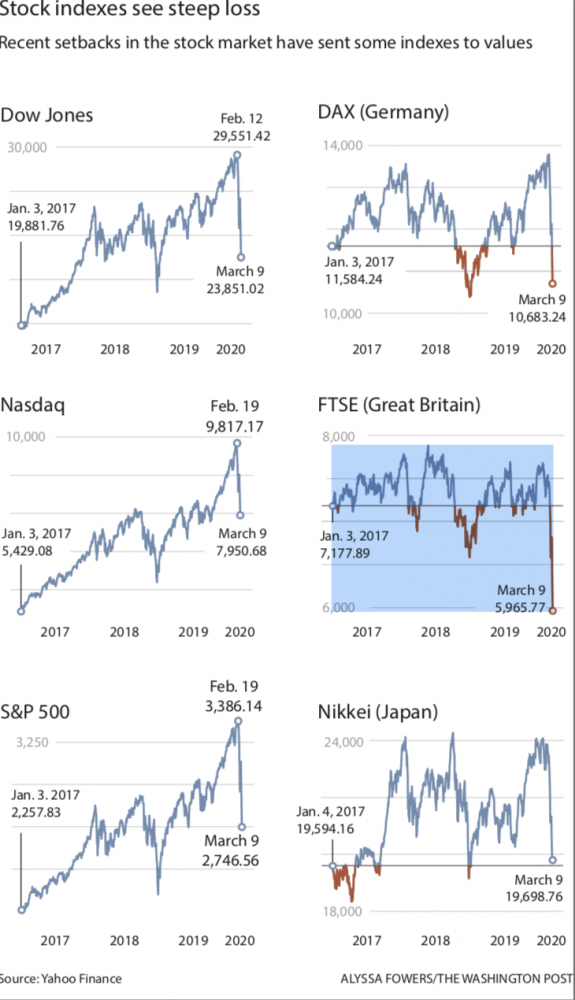 The outbreak continues to spread at a rapid clip with more than 113,000 cases worldwide, prompting Italy and Israel to take new extreme quarantine measures Monday. The director of the World Health Organization called the threat of a coronavirus pandemic "very real."

"We are going to take care of and have been taking care of the American public and the American economy," Trump said.

The U.S. tally of known infections of covid-19, has passed 500 spanning across 30 states. The growing outbreak has wreaked havoc on the travel and tourism and manufacturing supply chains on a range from cars to smartphones. Americans are increasingly staying at home, choking off the spending that normally fuels the U.S. economy, and setting off alarms that a recession could be underway.

Many stores, restaurants, gyms and entertainment venues are seeing reduced traffic, an indication that the financial pain is spreading. That's on top of ports, railroads and trucking companies seeing anemic business as the flow of goods and supplies from China has slowed sharply.

The economy faced a fresh blow over the weekend as oil prices dropped to about $30 a barrel, a level at which few American oil producers can survive for long.

There's widespread agreement that the U.S. and global economies will come to a standstill this spring, a debilitating fall that carries major risks. Whether it turns into a full recession - defined as six straight months of contraction - depends largely on whether governments can act quickly enough to contain the virus and ensure that there is not a massive wave companies defaulting, layoffs mounting and Americans running out of cash.

"A global recession is more likely than not," said Mark Zandi, chief economist at Moody's Analytics. "The line between an expanding economy and recession is crossed when investors, businesses and - most important - consumers lose faith. Faith that they will have a job, that they will receive a paycheck, and that their retirement nest egg is safe."

Uncertainty reigns over questions of how long the virus will stick around, how many people will be affected and whether the Trump administration can rise to the twin challenges of a health and economic crisis.

As the stock markets approached a 20% fall in value from its most recent high, stocks came close to so-called bear market territory. If the markets fall into a bear market, it would mark the end of an 11-year bull market run of rising stocks that began on March 9, 2009. At the end of trading Monday, the Dow had shed more than 19% since its record high from Feb. 12.

Minutes into the opening of the New York Stock Exchange, stocks had fallen so much, so quickly that they tripped the "circuit breaker." That has not happened since 1997, and it immediately forced a 15-minute brake in trading on the hopes that investors would re-assess. When the timeout was temporary ended, stocks barely budged, staying at low levels all day.

Circuit breaker rules were put in place after 1987's "Black Monday," when a market plunge wiped out $500 billion in a single day - at the time the biggest single-day drop in history - and the equivalent of about $1.1 trillion today.

On coronavirus Monday, the market shed $1.87 trillion of value, according to analyst Howard Silverblatt of S&P Dow Jones Indices. Investors are waiting for clarity, many say, and they are unlikely to get it soon.

"Markets hate uncertainty and there is a ton of it currently in play," said Greg McBride, chief financial analyst at Bankrate.com.

The other major force weighing on the markets Monday was the collapse of oil prices, which tumbled to about $30 a barrel range, off from about $45 a barrel last week, after Saudi Arabia and Russia deadlocked over production. The Saudis had been pushing for a cut in output to prop up prices but reversed course when Russia balked and decided, instead, to flood the market with hundreds of thousands of additional barrels per day - a move analysts fear may trigger a price war.

Trump cheered the lower oil prices because they make it cheaper for Americans to buy gas at the pump. Yet, as the United States has grown into a powerhouse energy player, lower prices can have devastating impacts on U.S. companies and regions of the country that rely heavily on oil and gas jobs. Pennsylvania has more than 36,000 people working in the shale gas industry, and neighboring Ohio has close to 18,000, according to Labor Department data.

"If these prices go on for too long, there will be a lot of bankruptcies," said Jack Allardyce, an oil and gas research analyst at investment firm Cantor Fitzgerald Europe. "You need at least $40 a barrel to break even for production in the United States, and most won't be making money at those prices."

Fears are growing that some companies might default on their corporate debts. Initially the concern was centered on airlines and travel businesses that have been hit particularly hard by coronavirus fears, but the list of companies on the critical watch list has spread to include energy, transportation and possibly restaurants.

Investors are betting on a worst-case scenario for the economy. On Monday, yields on the popular 10-year U.S. government bond fell below 0.4% for the first time, an unthinkable level only a few weeks ago and a signal that economic growth is expected to be almost nonexistent.

Economists are also concerned about low-income Americans, many of whom live paycheck to paycheck. As more Americans stay home across the country, waiters and service workers get fewer hours and tips. Some workers do not get paid sick leave for that time. If unemployment, which is at a half-century low, starts to rise sharply in the coming months, that's enough to weigh on confidence in the economy and spur consumers to pull back even more on spending.

"People who really don't have a buffer are going to spend less on everything. We could see this soon. And if we start to see consumer spending slip, then we have a big problem," said economist Claudia Sahm, one of the leading experts on downturns and the director of macroeconomic policy at the Washington Center for Equitable Growth. "I'm worried about a recession. I really am."

Despite the rapid decline in markets, financial advisers overwhelmingly recommend that most Americans should not panic and stay invested. U.S. stocks have always rebounded. While many people worry about getting out of the market before it drops, it's equally important to invest again before the market rises. Almost no one gets both those timing cues right, which is why it's usually better to stay invested.

"For the individual investors, this shows how crazy it is to try to do market timing," said James Angel, a finance professor at Georgetown University's McDonough School of Business "You often see the biggest upturn right after a downturn. The best year for stocks was 1933."