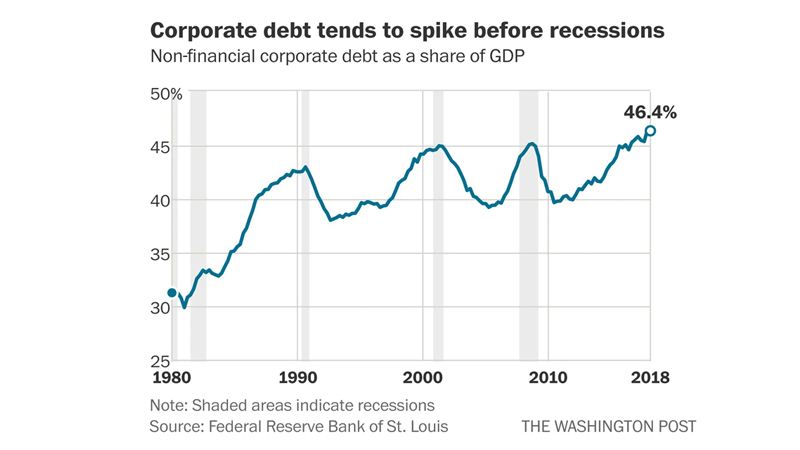 The coronavirus panic could threaten a $10 trillion mountain of corporate debt, unleashing a cycle of layoffs and business spending cuts that would hit the economy just as some analysts are warning of a recession.

Financial markets already are showing major signs of stress. Investors are demanding higher interest payments in return for lending to less creditworthy companies; some businesses are delaying their planned bond sales while they wait for Wall Street to settle down; and ratings agencies are moving toward downgrading some corporate borrowers.

The mammoth debt bulge includes a dramatic increase in borrowing by the lowest quality investment grade firms -- those rated just one level above "junk." More than $1 trillion in "leveraged loans," a type of risky bank lending to debt-laden companies, is a second potential flash point.

Watchdogs including the Federal Reserve have warned for years that excessive borrowing by corporations, including some with subpar credit ratings, might eventually blow a hole in the U.S. economy. Now, as Wall Street wrestles with a global epidemic, the debt alarms show how investors are reassessing risks they overlooked during the long economic expansion.

"It is a big concern," said Ruchir Sharma, chief global strategist for Morgan Stanley. "We're dealing with the unknown. But given the enormous increase in leverage, the system is fragile and vulnerable."

Energy companies that have borrowed heavily in recent years may be the first to suffer, due to the oil price war between Saudi Arabia and Russia. Falling oil prices, while good news for consumers, may reach levels that will make it impossible for companies in the U.S. shale industry to cover their costs.

On Monday, investors battered some energy companies that have big outstanding obligations. Shares of Halliburton, which has more than doubled its total debt to $11.5 billion since 2012 despite sliding revenues and earnings, lost 38 percent of their value.

The oilfield services company last week raised $1 billion by selling investors 10-year bonds paying interest of 2.9 percent. Halliburton said it plans to use the proceeds to pay off existing debt. Over the next six years, it faces $3.8 billion in debt payments.

In response, the Federal Reserve cut its benchmark lending rate to zero and kept it at or near historic lows for a decade. The aim was to heal a wounded economy, but the era of easy money bred excesses that only now are coming into view.

Access to low-cost credit helped many companies grow and hire. But it also enabled some that weren't profitable to survive by repeatedly refinancing their debt. These "zombie" firms, which do not earn enough to cover their interest payments, account for one in every six publicly-traded U.S. companies, according to Sharma.

Roughly half of the total debt of nonfinancial companies is rated "BBB," just slightly better than junk or high-yield debt. Companies such as Ebay and Martin Marietta have sold bonds this month to investors with such ratings.

Using a broad measure of business liabilities, the ratio of debt to assets is at its highest in 20 years, according to the Fed. One potential trouble spot lies in the rapid growth of "leveraged loans," made by top banks such as Goldman Sachs and JPMorgan to scores of cash-short companies.

Until recently, such loans typically were made to companies that were not already deeply in debt. But in the past two years, the biggest borrowers were the nation's most indebted companies, according to the Federal Reserve. In the first half of last year, roughly 40 percent of leveraged loans went to companies with a debt-to-earnings ratio of six-to-one or greater.

Businesses have been able to bear their extraordinary debt burden only because borrowing costs have been historically low. If that changes for any reason, cash-strapped companies would likely resort to layoffs and slash their spending on new factories and equipment in order to conserve funds for interest payments.

The danger now is that the economy's sudden stop -- with conferences and other public events cancelled; travel discouraged; and consumers staying home -- will cut revenue for many companies and make it harder for them to repay their creditors.

Even before the full effects of the coronavirus hit the U.S., analysts were cutting their earnings forecasts. As of Feb. 28, more than twice as many companies in the S&P 500 index had issued negative guidance on their first-quarter earnings as had issued upbeat assessments, according to Factset, a financial data company.

At the same time, nervous investors are becoming pickier about which borrowers they fund, cutting off the flow of cheap money to companies that need it to stay alive.

"It's a pandemic of fear that's spreading faster than the virus," said Ed Yardeni, head of an eponymous research firm.

In recent days, signs of bond market stress have been multiplying. After years of barely distinguishing between good credit risks and bad, investors are growing more discerning.

The "spread" or additional yield that investors demand to hold junk bonds compared to risk-free U.S. treasuries has increased by more than 2 percentage points since mid-February -- roughly four times the increase investors required from more creditworthy borrowers, according to Bloomberg Barclays data.

New corporate bond issues were falling even before the coronavirus upset Wall Street in the past few weeks. In January, U.S. corporations sold $63.4 billion worth of bonds to investors, down more than 10 percent from the same period one year earlier, according to the Federal Reserve.

"Corporate bond issuance has petered out quite a bit," said Kathy Bostjancic, U.S. financial market economist at Oxford Economics. "There were a few days last week we didn't have any...There's just so much fear."

If the economic outlook darkens quickly, a large number of borrowers might become "fallen angels," downgraded from the lowest investment grade into the speculative junk market. Along with higher borrowing costs, some of them might struggle to find creditors since many pension plans, insurers and mutual funds are permitted to buy only investment-grade securities.

"We've had so many years of cheap and easy money with little differentiation in credit quality," said Sonja Gibbs, managing director with the Institute of International Finance. "What happens if you start seeing downgrades?"

To be sure, the current bond market turmoil is not yet as severe as that experienced during some previous recessions, Sharma said. Overall financial conditions are about as tight as they were during the 2011 European debt and currency crisis, though not yet as bad as during the global financial crisis, according to Deutsche Bank Securities.

"The likelihood that we'll have a full blown liquidity crisis is pretty limited," said Michael Stritch, chief investment officer for BMO Wealth Management. "The banking sector is much less leveraged than in the past, so that's a positive in terms of credit availability."

Still, with investors expecting the Fed to return its key lending rate to zero in the next few months, some Fed officials are calling for the central bank to take additional extraordinary actions. Eric Rosengren, president of the Federal Reserve Bank of Boston, said on March 6 the Fed should consider buying assets other than government securities to buttress the economy.

Rosengren didn't offer any specifics, but acknowledged that Congress would need to authorize any Fed purchase of stocks or corporate bonds.

Corporate debt excesses are not limited to the United States. Corporate zombies also roam the European Union and Japan, where borrowing costs have been low for years and are now negative. In a 2018 study of 14 advanced economies, the Bank of International Settlements said the share of zombie firms had risen from 2 percent in the 1980s to 12 percent in 2016.

The International Monetary Fund and the Fed have warned about reckless corporate borrowing for several years. In a global downturn that was half as severe as the 2009 crisis, corporations in eight major economies, including the U.S., China and Japan, might be unable to repay $19 trillion worth of debt -- nearly 40 percent of the global total, according to the IMF's most recent global financial stability report.

"These debt levels truly are troublesome, any way you measure them within the U.S., China and Europe. But you need some kind of catalyst to get people to worry about it," said Gibbs. "This kind of position we find ourselves in is the type of catalyst that can create a contagion."