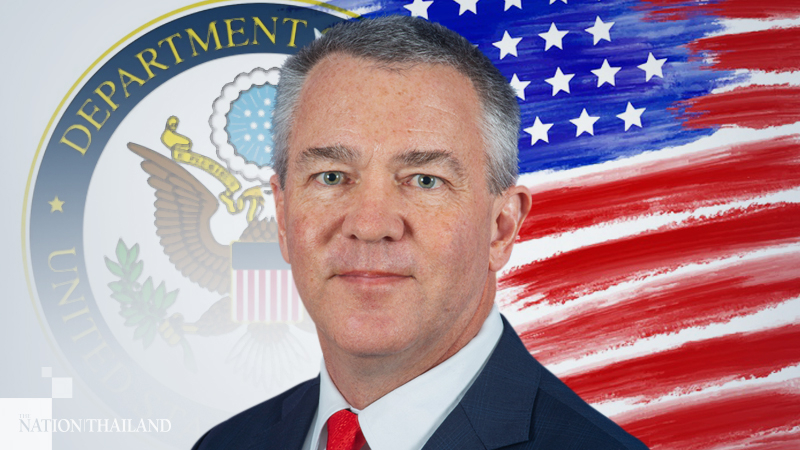 Newly appointed United States Ambassador to Thailand Michael G DeSombre told reporters on Wednesday (March 11) that more US companies are expected to move their facilities out of China and into Thailand and Southeast Asia.

In response to the concerns that US-China trade conflict are affecting supply chain in the region, DeSombre replied that Chinese unfair trade practices have been negatively impacting the US and many countries for a long time.

“We are very pleased that we are able to reach a Phase One agreement and looking forward to continuing the negotiation of the Phase Two agreement. I actually think that this whole process can be very beneficial to Asean. I think we have seen already in Vietnam substantial movements of supply chain from China to Vietnam. I think — now that the US government has fully reengaged with Thailand after the elections — that we really will be encouraging, and I’ll be looking forward to working with the Thai government to encourage, more companies to move their supply chain from China to Thailand,” he said.

In answering the question on the obstacles facing US companies in moving their factories to Thailand, DeSombre is optimistic that US and European firms would consider moving their supply chains to Thailand, saying that after Thailand’s March election, the US government has fully reengaged with the Thai government, giving confidence to American businessmen.

“I don’t think I have the perfect answer to it at the moment. But I do know from conversations with American businessmen and businesswomen that there was a concern about Thailand until the election. And so, having the election over with, having the US government itself being reengaged without any restrictions in Thailand, gives comforts to a lot of American businessmen. So, I think this is the perfect opportunity. And with my arrival, you know, I can really emphasise that US companies and other Western companies should consider Thailand as a location to put their supply chains,” DeSombre said.

When asked about the US presidential election this year and how political changes will affect its relationship with Thailand, he replied that he did not see major changes regardless of the election outcome.

“I’m very fortunate to be here in Thailand and particularly in Asean and the Indo-Pacific because it is very clear at the moment that there is broad bipartisan support for the current administration’s foreign policy in Asia: The Indo-Pacific strategy and the National Security Strategy. This was demonstrated most clearly through the bipartisan Asia Reassurance Initiative Act passed at the end of 2018 that had brought support from both Democrats and Republicans and really echoed the main themes of the president’s foreign policy. So I do not see any major changes leading up to or after, regardless of the outcomes of the election,” he said.

He said that US firms are interested in investing in Thailand’s Eastern Economic Corridor and other parts of the country.

But he warned that Thailand will likely lose a third of its trade privileges under the Generalised System of Preferences (GSP) next month because it is unwilling to change its labour laws, as Washington demands.

The US government is poised to revoke GSP import tax privileges for Thai products next month because of what it considers substandard labour practices here. The value of those privileges has been put at $1.3 billion, covering more than 500 categories of exported products.

The revocation will come into effect on April 25.

“This has been a long process, and to avoid that removal of the preferences would require various changes to labour laws that the Royal Thai Government was not willing to do.

“So, at this stage, there really is no opportunity to prevent the loss of the preferences. It is important to note, however, that even after the loss of that one-third Thailand will still be the largest beneficiary of the GSP at over $3.4 billion. So, it has to be kept in perspective,” DeSombre said

Regarding the string of pro-democracy protests being waged by students nationwide, DeSombre said the US supports democracy but “does not choose sides”, rather letting sovereign nations develop their own systems of democracy. “Democracy is messy and challenging,” he said.

He plans to invite members of Thailand’s Parliament to visit the US Congress to observe how democracy work there.

But DeSombre said the US will strengthen trade and investment with Thailand based on the Treaty of Amity and Economic Relations signed in 1966. Washington will also continue to press Bangkok on security cooperation and sub-regional Mekong development, he said.

The Bangkok embassies of the US and Canada and the European Union in Brussels recently raised concerns over the Constitutional Court’s ruling that the Future Forward Party had to be dissolved.

The foreign governments said the verdict had the potential to disenfranchise the party’s six million supporters in the 2019 polls of their political rights.

US President Donald Trump has postponed a planned US-Asean summit in Washington. He had invited Asean leaders to meet him in Washington in the first quarter of this year in lieu of his attending the Asean Summit in Bangkok in November.

President Trump nominated Michael G DeSombre to be ambassador to Thailand last July and his posting was confirmed by the US Senate this past January 8.

He previously worked as a partner in the law firm of Sullivan and Cromwell, in charge of mergers and acquisitions in Asia.

DeSombre has more than two decades of experience representing and negotiating on behalf of American and international clients in large-scale investment and economic-development projects in Asia, gaining insight into the political, legal and strategic challenges that face American interests in the region.

He graduated from Stanford University with a bachelor’s degree in quantitative economics and a master’s in East Asian studies and received his doctorate of jurisprudence from Harvard Law School. He is married with four children.