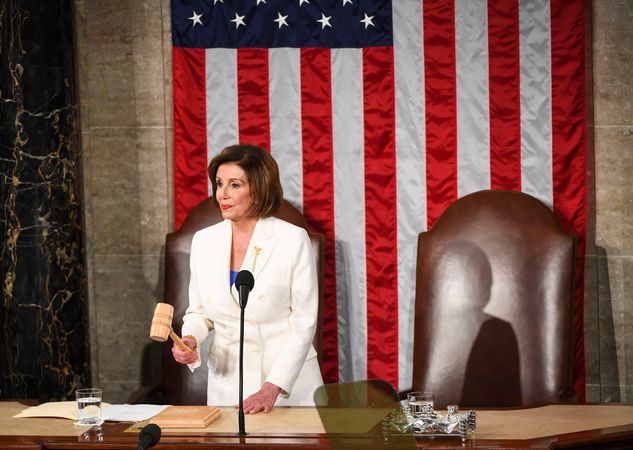 WASHINGTON - The Trump administration and congressional Democrats moved toward a deal Thursday on an economic relief package to help workers impacted by the coronavirus, with both sides under intense pressure to act as the scale of the crisis mounted.

The talks between House Speaker Nancy Pelosi, D-Calif., and Treasury Secretary Steven Mnuchin raised hopes on Capitol Hill that a bipartisan agreement was in reach - within days if not hours - to address the health catastrophe that has upended Washington and the nation.

A congressional recess is scheduled for next week, but Pelosi vowed Thursday not to leave until action was taken, while Senate Majority Leader Mitch McConnell, R-Ky., announced he would cancel the recess to advance "bipartisan legislation to continue combating the coronavirus and keep our economy strong."

"I think it would be wise to have folks here," said Sen. Joni Ernst, R-Iowa, who is up for reelection in November. "This is such a serious issue. We need to be continually monitoring this as a group, not having us all out to the four winds."

The behind-the-scenes negotiations between Democrats and the White House stood in contrast to the partisan response that greeted a package of economic measures that House Democrats introduced late Wednesday.

The House bill includes a $2 billion boost to state unemployment insurance programs, more than $1 billion in nutritional aid, a new paid-leave benefit for employees affected by the outbreak and an increase in federal Medicaid spending, as well as a guarantee of free coronavirus testing.

That package met a frosty reception early Thursday from the White House and congressional Republicans, who were wary of the bill's costs and its potential burdens on employers.

"There are things in there that have nothing to do with what we're talking about," President Donald Trump told reporters as he met with the prime minister of Ireland in the Oval Office. "So, you know, it's not a way for them to get some of the goodies that they haven't been able to get for the last 25 years."

McConnell called the bill "an ideological wish list that was not tailored closely to the circumstances."

House Minority Leader Kevin McCarthy, R-Calif., meanwhile, told reporters the Democratic bill contained "glaring problems" that would be difficult to resolve before the congressional recess that was set to begin later Thursday.

"We should not take a rush just because there is a bill," he said. "We should make sure it works."

Trump is advancing costly ideas of his own - including a payroll-tax holiday that could drain tens of billions of dollars from Social Security. That idea has gotten limited traction among both parties on Capitol Hill.

But as the day progressed, the leaders of both parties sent growing signals there was a deal to be had. McCarthy, for instance, suggested a narrower package could win GOP support - leaving broader measures, such as the payroll-tax cut, for another day.

Pelosi said Mnuchin's suggestions had been "all very reasonable" and, like McCarthy, held out the possibility of a broader economic relief bill later.

"We are . . . agreeing to most of it, because they are not that different. So we don't need 48 hours," she said. "We need to just make a decision to help families right now."

By late afternoon, a senior administration official said that the two sides had "made a lot of significant progress since the sun came up this morning," although several issues remained to be resolved. The official spoke on condition of anonymity to provide insight into the confidential negotiations.

Sen. Rob Portman, R-Ohio, said most of the ideas advanced by House Democrats were acceptable to Republicans. He said he was in touch with the White House about tailoring the Democrats' paid sick leave proposal to ensure it can be accessed more quickly, and that it doesn't turn into an open-ended entitlement.

"So I'm just saying, let's try to accomplish something that we can agree on and get it done," Portman said.

Only last week Congress passed an $8.3 billion emergency spending plan to address public health needs arising from the crisis. But as the stock market plunges, layoffs begin, schools around the country shut down, and entire sports leagues shutter their seasons, the need for a robust economic response has become glaring.

There are now well over 1,000 confirmed coronavirus cases in the U.S. and more than three dozen deaths, numbers that are expected to exponentially rise. And increasing numbers of lawmakers are announcing plans to shut down their offices and self-quarantine following brushes with infected individuals.

The White House was also moving to assemble its own relief plan, one that included requests for congressional action as well as administrative actions that the Trump administration could take unilaterally.

White House officials were holding meetings Thursday to hammer out details of the administration's economic response package as promised by Trump in his national address Wednesday night, including some kind of paid-sick-leave plan that could be enacted administratively. Critical details remained unresolved, however.

The House paid-leave plan relies on a two-pronged approach, combining a temporary program that would be administered by the Social Security Administration that would provide up to $4,000 a month to affected households, with a new permanent sick-leave mandate for U.S. employers. Only firms employing fewer than 50 people would be eligible for federal assistance in meeting that mandate, which was strongly opposed by the administration.

Another controversial provision would increase the percentage of Medicaid spending borne by the federal government by 8 percentage points through Sept. 30, 2021. That would be a welcome relief to states, which could see an influx of Medicaid enrollees in a time of economic crisis. But the price tag for the federal government could be vast - stretching easily into the tens of billions of dollars.