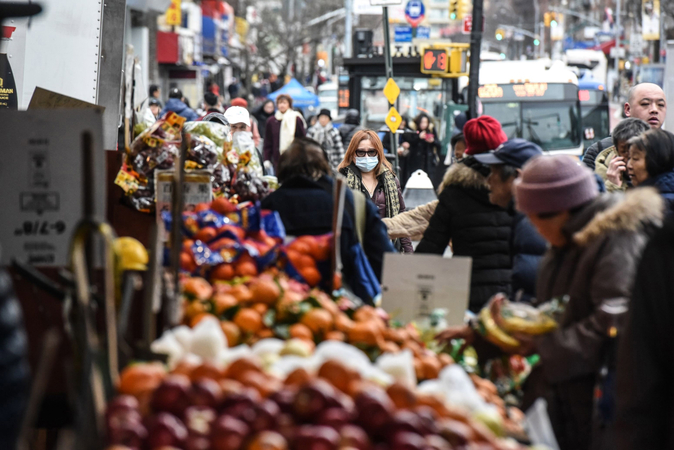 Public health officials are urging Americans to help slow the spread of coronavirus through social distancing, leading to isolation measures unseen in recent times. Cultural and sporting events are being cancelled, universities are shutting down and large office buildings are emptying out so staff can work from home.

All of that separation is vital for public health but terrible for business at all levels of the economy - first and foremost for entrepreneurs who rely on foot traffic and social gatherings to make ends meet.

"We're about to conduct a grand experiment in the United States. We're going to figure out exactly every task that's part of work that can be done remotely," said Joe Brusuelas, chief economist at RSM, an auditing and consulting firm. "Small and medium-sized firms, these are the firms that are most likely going to need temporary bridge financing...to survive a sharp, albeit transitory, decline in economic activity."

The Small Business Administration has said it's ready to provide low-interest loans of up to $2 million to small firms hurt by the coronavirus outbreak. "These loans may be used to pay fixed debts, payroll, accounts payable and other bills that can't be paid because of the disaster's impact," the SBA said in a statement.

In a televised address Wednesday night, President Donald Trump called on Congress to devote an additional $50 billion to the SBA loan program.

Brusuelas estimated the disruption tied to social distancing will last eight to 10 weeks, based on outbreaks in South Korea and Italy. But no one knows for sure, and the uncertainty is rattling entrepreneurs.

"The plan is changing by the minute for us," said Hugh Grant-Chapman, a server at Mikko cafe in Washington, D.C. People were still coming in to dine this week, but the catering business that constitutes most of Mikko's revenue has been "destroyed," he said.

So many events have been canceled at the last minute that the kitchen is full of prepared food no one wants, he said. "I just saw them throw away a whole thing of lentils," he said. "We're cutting back hours for everyone. The catering team has nothing to do."

A few doors down, Swift Dry Cleaners is "struggling," owner Daniel In said. "If you're not working, you don't need dry cleaning."

"I don't want to tell my employees not to come to work because I want them to be able to provide for their families," he said. "But I can't have people come in and do nothing." In is considering asking his landlord for a discount on his rent.

"There were supposed to be 30 people here. We have two people," said marketing manager Carlen Dickerson, motioning toward empty tables. "A lot of the offices around here are remote now."

Simliar scenes are playing out nationwide, said Holly Wade, director of research at the National Federation of Independent Business.

The problems are particularly acute in restaurants, catering groups and any businesses that are "public-facing," she said. But NFIB has also heard from other businesses reporting impact, all across the country.

A plastics manufacturer in Pennsylvania says a conference its employees were supposed to attend was cancelled at the last minute, costing the company money and work time. The owner of a parking lot near an airport said business is down.

John Bailey, owner of a charter-bus company employing 50 people in York, Pennsylvania, said 50 groups have cancelled trips in the last week, with more sure to cancel in the coming weeks as college sports, schools and universities shut down. He anticipates the disruption will cost his company hundreds of thousands of dollars.

On a conference call with members of the Pennsylvania Bus Association Friday, Bailey heard plenty of other dire stories. A hotel owner said tour groups were cancelling into mid May. "It's not just the hotel room that gets cancelled," Bailey said in an interview. Tour groups "eat in restaurants, they go to shows, the buses do rest stops, they are buying fuel along the road. Things wear out on buses and you've got to buy parts," he said. "It's going to have a real ripple effect on the economy."

After the Sept. 11 terrorist attacks, business dried up for about three weeks, and then things rebounded, Bailey said. "With this one, there's no end date," he said.

David Wilcox, an economist at the Peterson Institute for International Economics, said hourly workers at small businesses could be in for considerable pain. Their shifts and income may be cut, but they won't technically be out of work and eligible for unemployment benefits.

And without paid sick leave in many parts of the country, some employees will feel pressured to show up for work even if they feel unwell or have a loved one to care for.

"It's going to be a very tough experience for the bottom half of the job ladder," Wilcox said.