A worker picks tobacco in a field on July 8, 2016, in Deep Run, N.C. Tobacco growers have lost about $250 million since 2018, when tariffs caused China, their largest customer, to stop buying. MUST CREDIT: Washington Post photo by Matt McClain

WILSON, N.C. - A generation ago, the annual opening of the tobacco market was a big event in this eastern North Carolina city. Bales of sweet-smelling tobacco leaves lined the warehouses downtown. People crowded in - politicians looking to boost their credentials with the powerful agriculture community, local reporters covering the market, farmers and their families and, of course, merchants ready to make a sale.

Today, that activity is privatized, with transactions taking place in offices, buildings and factories away from the public eye. The shift obscures the crisis facing growers throughout the South, as well as the industry and those depending on it. 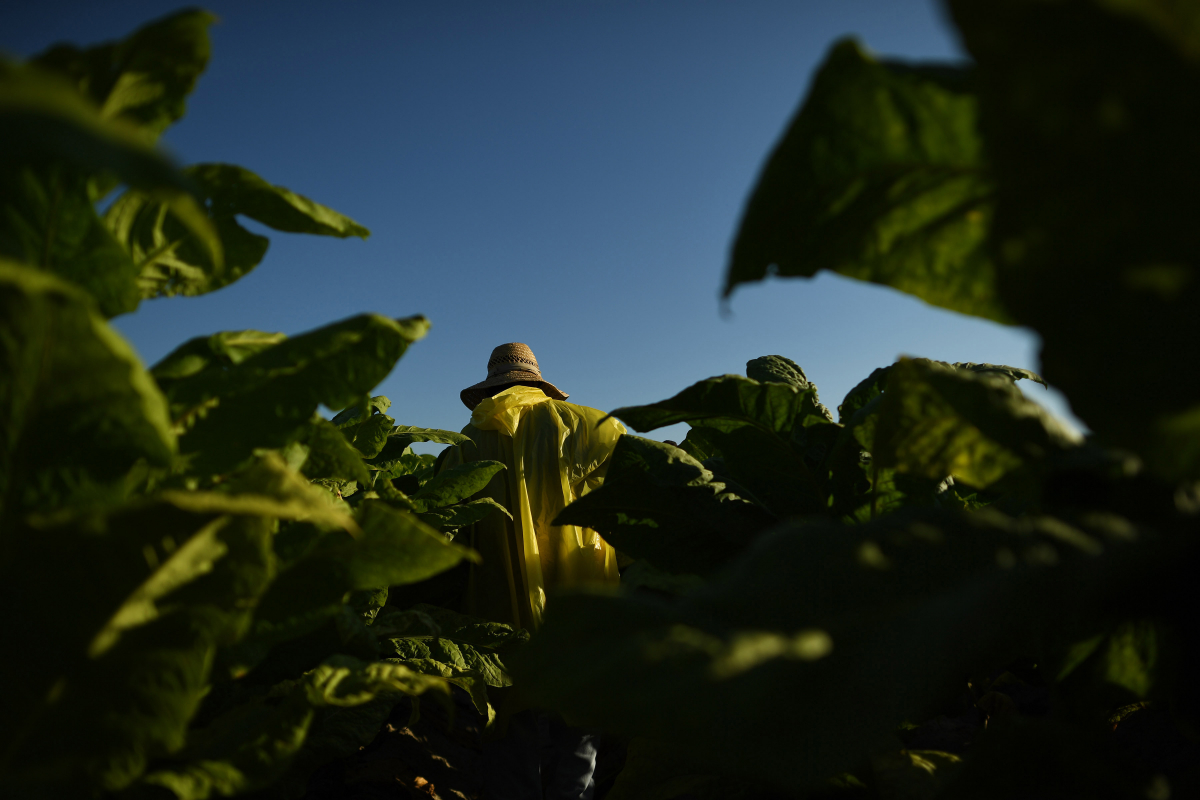 "You don't see it, but a lot of these people are hurting bad," says former Democratic congressman Bob Etheridge, who led the state office of the U.S. Farm Service Agency from 2014 through 2017.

"Devastating is the word," says Rick Smith, president of the Independent Leaf Tobacco Co., who has spent a half-century buying and selling tobacco around the world. "The agricultural community is struggling. They're all struggling."

The pain is especially acute in North Carolina, where 2,000 growers are suffering from the loss of their biggest customer: China. Thanks to the tariffs on Chinese imports that President Donald Trump imposed in 2018, tobacco sales to that country have ground to a halt. In this state alone, growers have lost roughly $250 million since then. But unlike farmers raising soybeans or vegetables, cows or pigs, they weren't eligible for federal bailout payments intended to soften the tariffs' blow.

And despite 2020 opening with a new trade agreement and the potential for greater farm exports to China, much remains in limbo as spring nears. Seeds need to be planted in greenhouses this month so they can be transplanted to the fields in April and then harvested in late summer.

The uncertainty is endangering individual livelihoods, not just of growers but of the workers who earn offseason dollars in the processing plants. It's also threatening rural communities, which have long been buoyed by tobacco money, and exacerbating the divide between them and North Carolina's booming urban areas.

While many growers are still stalwart Trump fans, some wonder if there will be repercussions at the polls in November.

Wilson County farmer David Hinnant is feeling the pain. "We did take a hard hit. It's cut all of us back," he admitted recently.

Hinnant's family has been in the area since the late 1700s, growing tobacco through the generations. Nowadays, thanks to the past profits from tobacco, he and his son also plant sweet potatoes, corn, soybeans and peanuts on their 3,000-acre farm.

"Tobacco enabled us to do these things," said Hinnant, 67, whose weathered face and hands bear testament to a lifetime of work outdoors. "We didn't get rich, but we made a living."

Over the past few years, those profits have shrunk tremendously because of the trade war. Hinnant and his son are trying to figure out alternatives, but nothing brings in the kind of money tobacco once did.

The sandy soils in the eastern part of the state nurture some of the best flue-cured tobacco in the world, and about half of all tobacco produced in the United States comes from North Carolina. The crop had stayed relatively lucrative compared to others, especially since China started buying U.S. tobacco around 2005. In 2017, much of the 300 million-plus pounds of tobacco sold abroad went to that country.

Trump's tariffs hit the following year, at a point when farmers already had a crop in the ground. Some did get paid for their harvest, but the inventory meant for China remains in U.S. warehouses. Last year was a complete bust between the tariffs and Hurricane Dorian, which destroyed many plants just before the end of the season. Ultimately, no North Carolina farmers got contracts for sales to China. The resulting glut has depressed market prices.

Tobacco cultivation has dropped considerably; last year, North Carolina farmers harvested 117,000 acres, down from 177,000 a decade earlier. Most now grow other crops; still, some are barely hanging on. According to the American Farm Bureau Federation, 16 family farms in North Carolina filed for bankruptcy in 2019, up from 12 the previous year.

The economic troubles ripple outward; one of the region's biggest private employers, Vidant Health, announced possible layoffs a month ago. Economists have estimated that every dollar earned from tobacco results in almost $4 in new spending - on farm equipment, fertilizer, labor and other purchases in the community.

In Wilson, located about 40 miles from the capital of Raleigh, the impact has been somewhat cushioned. Both the city and its surrounding county, which bears the same name, have had more success than others in the region at attracting manufacturing firms such as a Bridgestone tire plant and a Merck biopharmaceutical facility. Those have brought in new opportunities and dollars in recent years.

Yet Wilson County's median household income of $42,850 is still $10,000 less than that of the state. And the economy still depends on tobacco. All the big companies, including U.S. Tobacco Cooperative, British American Tobacco, Philip Morris and Pyxus, have a presence here. Some responded last year by consolidating their facilities; others simply didn't hire seasonal workers.

It's unclear what all this might mean for presidential politics come November. Trump won this deeply purple state by three points in 2016 and largely had the support of white farmers. But eastern North Carolina is home to a high percentage of African-Americans, many of whom vote Democratic. Wilson County, for one, went for Hillary Clinton in the last election.

Tobacco farmers don't seem to blame Trump for their tariff-related troubles. The trade imbalance had to be addressed, many say; they just happened to be in the crosshairs. "I can't say I was angry at the government. Some adjustments needed to be made," Hinnant explained.

Etheridge, the former Farm Service Agency leader, warns that such support is not a given - especially if the Democratic challenger takes their needs seriously.

"A lot of those farmers voted for the current administration because no one was speaking to them," he said. "I think if someone comes out with a policy and follows through, I think they'll listen."

Though hopeful about the recent trade deal with China, tobacco growers here have little clarity so far about its actual details. Many still don't have contracts with buyers outlining exactly how much tobacco they need to grow.

Hinnant has already seeded over half of his greenhouses despite the continuing uncertainty. He's taking the long view. "As farmers, we're optimists. We're optimistic that 2021 sets us back on track."