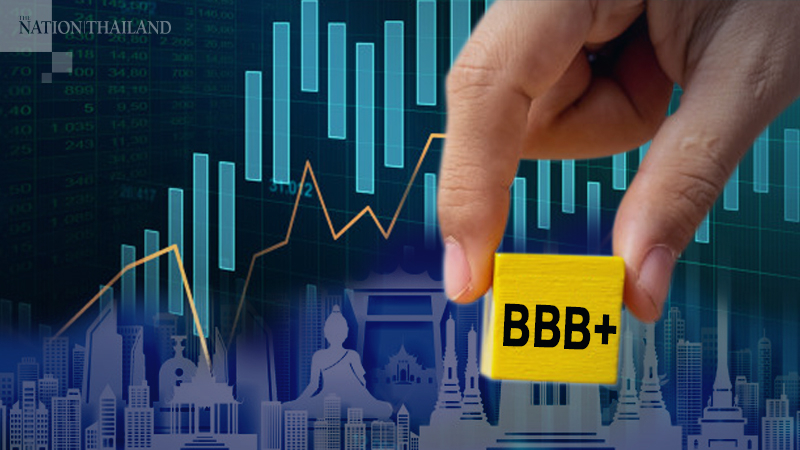 Fitch Ratings has revised its Outlook on Thailand's Long-Term Foreign-Currency Issuer Default Rating (IDR) to Stable from Positive and has affirmed the rating at 'BBB+', according to its statement relaesed on Tuesday (March 17).

The outlook revision reflects the evolving impact of the global Covid-19 outbreak on Thailand's economy through its tourism sector as well as lingering uncertainty in Thailand's political environment following the country's transition to civilian rule.

The 'BBB+' rating reflects Thailand's sound external and public finances, which serve as cushions against economic and financial shocks. These strengths are balanced by weaker structural features relative to peers, including lower World Bank governance scores and, to a lesser extent, lower income per capita.

This would mark a second consecutive year of slowing growth, and the lowest pace of expansion since 2014. A combination of factors led to the economic slowdown last year to 2.4 per cent, from 4.2 per cent in 2018, including weaker external demand amid US-China trade tensions, a sharp appreciation of the baht, delayed approval of the budget for the fiscal year ending-September 2020 (FY20), and drought conditions in the agricultural sector.

The growth outlook for 2020 is subject to considerable downside risk due to the uncertainty surrounding the duration of the virus shock. Thailand's tourism sector is especially vulnerable.

The sector and related business account for around 20 per cent of GDP, according to the Bank of Thailand (BOT).

Preliminary figures indicate that tourist arrivals for the month of February declined by almost 44 per cent year-on-year. Fitch baseline assumes the global outbreak is gradually contained, setting the stage for a gradual recovery of tourism inflow.

In the meantime, there are other factors supporting growth. In particular, the long-awaited approval of the FY20 budget will help to boost infrastructure investment in the remainder of 2020; the budget was delayed by over four months due to the lengthy formation of the new government coalition and legal issues about the validity of some parliamentary votes.

The government has also adopted various relief measures to support tourism and other sectors, such as extending the income-tax return deadline from March to June 2020 and tax deductions.

More recently, the government approved an estimated Bt400 billion (2.4 per cent of GDP) stimulus package, which includes targeted soft loans for small and medium enterprises (SMEs) to alleviate the impact of Covid-19 on the slowing economy.

Additional stimulus measures, such as tax benefits, debt payment extensions and financial assistance, may be adopted to maintain the debt-service ability of households and small private businesses if downward pressure on the economy persists in the next couple of quarters.

The rating agency expects momentum to regain traction in 2021, with growth projected at 3.8 per cent as external and domestic demand gradually recover in line with regional trends.

Continued public expenditure and implementation of the government's infrastructure programme under the 20-year national strategy and the Eastern Economic Corridor should support modest economic growth in the coming years, which Fitch estimates at 3.5 per cent over the medium term. Thailand will nevertheless continue to face structural challenges from an ageing population and human capital constraints.

The Bank of Thailand (BOT) cut its benchmark policy rate by 25 basis points to a historical low of 1 per cent at its last policy meeting on 5 February, adding to two rate cuts of a cumulative 50 basis points since August.

We expect one more rate cut in 2020 to bolster the economy in the near term. Headline consumer inflation increased to 0.7 per cent year-on-year in February 2020, well below the BOT's 1-3 per cent target band. We expect inflationary pressure to remain muted for the remainder of 2020, Fitch said.

Fitch expects Thailand's record of sound fiscal management to remain intact, supported by the enactment of the Fiscal Responsibility Act in April 2018.

It forecast a wider general government deficit (Government Finance Statistics basis) of 1.3 per cent of GDP in FY20, from 0.8 per cent in FY19, due to the reduced government revenue and the government's stimulus measures.

Fiscal measures from the recent stimulus package are unlikely to significantly widen the FY20 budget deficit, and we project the government to have fiscal space to counter a prolonged economic downturn.

Fitch expects the general government debt-to-GDP ratio to gradually increase to 43.3 per cent by FY24, from 35.9 per cent in FY19, as the government utilises its fiscal space to boost infrastructure investment. Thereafter, we project the debt ratio to revert to a downward trend.

Fitch forecasts Thailand's external finances to remain robust relative to peers, a core strength of the country's credit profile. We forecast the current account surplus to remain high at 5.8 per cent of GDP in 2020. Official reserves covered an average of 8.2 months of current external payments in 2018-2019; we forecast coverage of 8.7 months and a net external creditor position at around 44 per cent of GDP in 2020, both well above the 'BBB' and 'A' median peer levels.

However, the coalition's majority increased somewhat after nine members of parliament from the Future Forward Party joined a coalition party supporting the government. As such, the coalition government will likely be less constrained in parliament, reducing risks around its ability to implement its policy agenda and ensures policy continuity.

Nevertheless, a degree of lingering political uncertainty remains. In late February 2020 Thailand's Constitutional Court dissolved the Future Forward Party - a main opposition party that received the third-highest share of seats in the legislature - over claims of illegal donations to political parties. These actions have led to limited discontent at university campuses.

Fitch believes financial-sector risks will be contained amid the economic downturn. Thailand's household debt-to-GDP ratio at the end of 3Q/19 was 79.1 per cent (seasonally adjusted), which remains high compared with peers, and households' ability to service debts may worsen as economic conditions deteriorate.

However, Thai banks are well-capitalised, with high excess provisions and sound liquidity, providing a buffer against potential shocks, particularly for low-income households.