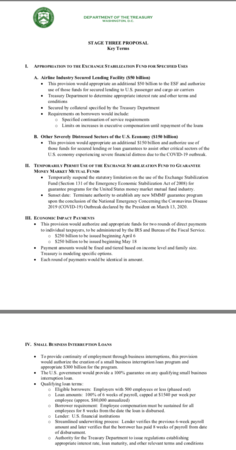 WASHINGTON - The Trump administration and congressional leaders rushed on Wednesday to assemble a massive stimulus package aimed at preventing the U.S. economy from plummeting into its worst collapse since the Great Depression, as fears about the coronavirus pandemic brought much of American life to a standstill.

The administration's $1 trillion proposed rescue plan, which forms the basis for fast-moving negotiations on Capitol Hill, includes sending two large checks to many Americans and devoting $300 billion toward helping small businesses avoid mass layoffs. Priorities laid out in a two-page Treasury Department document also include $50 billion to help rescue the airline industry and $150 billion to prop up other sectors, which could include hotels.

The White House is vetting these proposals with Senate GOP leaders before engaging more fully with Democrats, so the package is certain to evolve in coming days.Democrats, meanwhile, are eyeing their own priorities, largely aiming to shore up safety net programs and the public health infrastructure, as well as send money directly to American taxpayers, while shunning corporate bailouts. Rep. Maxine Waters, D-Calif., proposed on Wednesday having the Federal Reserve send $2,000 to every American adult and $1,000 to every American child until the crisis ends.

The emerging government stimulus package could be unprecedented in its size and velocity, dwarfing the $800 billion stimulus law passed during the Obama administration and the $700 billion Troubled Asset Relief Program enacted during the Bush administration. All told, between several legislative packages advanced on Capitol Hill and other actions the government has taken, the White House is pushing an economic plan that is "over $2 trillion and counting" to try to arrest the coronavirus's economic wrecking ball, a senior administration officials said. The official spoke on the condition of anonymity to reveal details of the planning.

The Dow Jones industrial average fell 1,338 points on Wednesday, or 6.3 percent, virtually wiping out all of the stock market's gains during Trump's entire presidency. Trump told reporters Wednesday that under a "worst case scenario," the unemployment rate could jump to 20 percent, twice its peak from the financial crisis. A JPMorgan Chase research note predicted the economy would shrink by 14 percent between April and June, the worst contraction in Post-World War II history.

"People want to go big," Trump said at a news conference when asked about the size of the direct payments to Americans. "Everybody seems to want to go big and they want to get to the recovery."

The global impact of the virus continued to skyrocket. Italy's coronavirus death toll increased by 475 on Wednesday, the largest daily increase recorded in any country. New York state, meanwhile, has roughly 2,500 confirmed cases, more than all but 10 countries in the world.

As the U.S. government continued to scramble and escalate its response, Trump ordered Navy hospital ships to states on the coasts. The U.S. and Canada agreed to close its entire border to "nonessential travel," and Ford and GM announced they would temporarily cease production at their North American plants. A growing number of business groups are petitioning the White House and Congress for economic relief as the total number of U.S. cases approached 8,000.

"The concentration of this drag at its most intense is far bigger than during the 2008 financial crisis," said Bruce Kasman, managing director and Head of Economic Research at JP Morgan Chase.

The Senate on Wednesday also voted to approve a House-passed bill that would spend some $100 billion on paid leave, unemployment insurance, and free testing to people impacted by the coronavirus fallout. That vote sends the legislation to Trump for enactment. That followed the passage of another law earlier this month of an $8.3 billion emergency spending package for the public health system.

But attention on Capitol Hill was focused on the next step, as lawmakers faced the need for urgent action to pass a major stimulus bill to stabilize the economy before they, too, are forced to abandon work. Hanging over the Capitol was the threat of coronavirus infections that have already reached into Congress with several congressional aides infected and a number of lawmakers announcing voluntary self-quarantine after coming into contact with infected individuals.

Wednesday evening brought news of the first lawmaker to contract the disease: Rep. Mario Diaz-Balart, R-Fla., who said he'd been notified that he had tested positive after developing symptoms Saturday, but was already feeling better.

Senate Majority Leader Mitch McConnell, R-Ky., announced a new process for voting Wednesday aimed at lengthening the time for votes so senators don't congregate in the well of the Senate. He urged his members to prepare to act.

"I want to repeat, again, the Senate's going to stay in session until we finish phase three, the next bill, and send it over to the House. Republicans hope, shortly, to have a consolidated position along with the administration and we intend to sit down with our Democratic colleagues, see what we can agree to," McConnell said on the Senate floor. "I would recommend senators stay around, close. Just how long it will take to get through these steps is unclear, but as everyone knows we are moving rapidly because the situation demands it."

The new $1 trillion Trump plan would seek to spend $500 billion toward the cash payments to individual Americans, though some people wouldn't qualify if their income is over a certain level. The Treasury Department outline says the funds would be paid out in two equal amounts, beginning on April 6 and then again on May 18. White House officials have eyed making each check $1,000, but those talks remain ongoing and the amount could grow.

The White House discussions with Republicans would aim to spend another $50 billion to help rescue the airline industry and $150 billion to prop up other sectors, which could include hotels, among others. Some Democrats have raised concerns about how these funds might be used and have called for putting restrictions on firms that receive emergency assistance to assure that employees aren't laid off while executives pocket large bonuses. The Treasury proposal suggests an "airline industry secured lending facility" that would allow it to make direct loans to "U.S. passenger and cargo air carriers."

Treasury would determine the interest rates and other terms of any loans, but they would include limits "on increases in executive compensation until repayment of the loans."

Trump said Wednesday that the exact sums were in flux as negotiations progressed on Capitol Hill.

"We're coming up with numbers. Haven't gotten there yet, but certainly the hotel industry, cruise ship industry, the airlines -- those are all prime candidates," said Trump. It's unclear if the president's own hotels could stand to benefit from any such bailout.

Republicans were on Wednesday trying to resolve internal divisions over the direct checks proposal and other parts of the administration's request. Sen. Lindsey Graham, R-S.C., a skeptic of the payments, was working with Sen. Mitt Romney, R-Utah, on a potential compromise in which the funding for the second direct cash payment would instead be used to increase unemployment benefits, Romney told reporters.

"If you're coming to me and just saying, we just want a bunch of taxpayer money, just give it to us, I'm not going to do that," Hawley told reporters.

Republican senators are also working out the details of the cash payment plan and whether the checks should be for more than $1,000, according to two people familiar with internal conversations. Administration officials have suggested $1,000 is a minimum for the proposed benefit payment.

Some Republicans said they were prepared to do what they had to, like it or not.

"The amount of spending, does it give everybody pause? A little bit. But you know what? It needs to be done," said Sen. Joni Ernst, R-Iowa.

The approach being taken by McConnell and the administration of negotiating among themselves and then looking for Democratic buy-in irritated some Democrats. It stands in contrast to how the last coronavirus bill was negotiated, when McConnell stood on the sidelines as House Speaker Nancy Pelosi, D-Calif., worked directly with Mnuchin.

"It's a totally partisan approach. ... That, to me, sends absolutely the wrong signal to the American public that we're actually trying to function and put the country first," said Sen. Mark Warner, D-Va. Some bipartisan talks were already underway, though, as Sens. Marco Rubio, R-Fla., and Susan Collins, R-Maine, worked on small business provisions with Democratic colleagues.

One of the goals of the White House's decision to seek $300 billion for small businesses in the plan would be to help firms continue paying employees, as there has already been a wave of layoffs, particularly at restaurants and other companies where business has suddenly halted.

These credits, which Treasury is calling "Small Business Interruption Loans," would come with a 100 percent government guarantee. Eligible borrowers would have 500 or fewer employees, and the loan amounts would be targeted to finance six weeks of payroll, capped at $1,540 per week per employee. The loans would come from U.S. financial companies but would have U.S. government backing. The Treasury Department would have the power to issue regulations about interest rates and loan maturities.

The package doesn't, at this point, include some of the big tax cuts that Trump had sought only a few days ago. White House officials pivoted away from the tax cuts after Democrats and Republicans largely panned the idea, and Trump expressed concern that it would take too long for these benefits to filter through to the economy.

The White House also sent Congress a separate emergency funding request for $46 billion for "ongoing preparedness and response efforts" to the coronavirus. This would include new funding for the Department of Defense, the Department of Veterans Affairs, the Centers for Disease Control and Prevention and the National Institute of Allergy and Infectious Diseases.