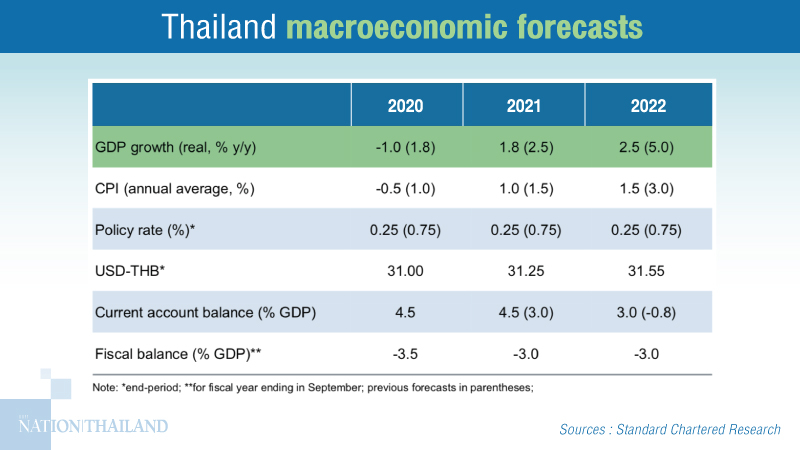 Thailand’s economy shows no signs of a turnaround. The coronavirus outbreak has dealt a further blow to activities, and the consumer confidence index declined in February to the lowest level since April 1999. Domestic financial markets, even bond markets, continue sell off, said Tim Leelahaphan, economist at Standard Chartered Bank (Thai).

"The bank has sharply lower our 2020-22 GDP growth forecasts to reflect the worsening coronavirus outbreak – both globally and domestically – and our recent downward revisions for China, the US and the euro area as we are expecting recessions in the US and euro area).

Tim  expects a substantial current account (C/A) surplus of 4.5 per cent in 2020, but now expects larger surpluses in the subsequent years due to lower imports amid a slowing economy, lower oil prices and a strong expected recovery in inbound tourism." We revise up our 2021-22 C/A forecasts to 4.5 per cent of GDP (from 3.0 per cent ) and 3.0 per cent (from -0.8 per cent )," said Tim.

The timing of the tourism recovery is difficult to predict, but we now expect it to be delayed beyond Q2/2020. The latest data from the Tourism Authority of Thailand (for February) shows that arrivals plunged 44.3 per cent year on year; arrivals from China fell 85.3 per cent. The Songkran (Thai New Year) festivities in April have been called off, and the granting of visas on arrival or visa exemptions for a total of 21 countries has been cancelled until the situation improves. However, the government has said it may consider classifying China as less risky as the rate of new cases there has moderated, according to a Bloomberg report.

Current low oil prices will support the C/A surplus given Thailand’s status as a net commodity importer. In addition, we do not see a large increase in investment-related imports in the foreseeable future. The current government appears to be focused on providing a short-term boost to the economy via private consumption rather than reviving investment, according to the bank.

We expect fiscal deficit forecasts of -3.5 per cent of GDP for 2020 and -3.0 per cent for both 2021 and 2022. The Cabinet has approved phase one of a Covid-19 stimulus package combining tax benefits, soft loans for businesses and relief measures for households, but without additional spending. These measures are expected to inject about Bt400 bn (2.4 per cent of GDP) into the economy, according to the Fiscal Policy Office (FPO); we think the impact will depend on private-sector take-up of the measures.

While these measures have provided an initial boost to sentiment, they may have a limited impact on private consumption or the economy as a whole. We believe more effective fiscal spending is needed – particularly in the form of public infrastructure investment – before the private sector will respond. A personal income tax cut could be more effective; the Palang Pracharath Party, the biggest party in the government coalition, promised such a cut as part of its election campaign. However, this might not materialise soon, as the Finance Ministry has indicated that it would be reluctant to reduce a steady source of revenue.

Political noise is rising, even if risk remains low. Students and supporters of the now- defunct Future Forward Party (FFP) have held small protests and gatherings since 21 February, when the Constitutional Court ruled to dissolve the opposition party for violating election laws. The bank does not see a significant risk that this will escalate into street protests at this stage, as coronavirus concerns are likely to deter large gatherings.

Tim expects the Bank of Thailand (BOT) to deliver a 25 basis point rate cut at its scheduled meeting on March 25, taking the policy rate to a new low of 0.75 per cent. Given recent decisions by other central banks, we do not rule out an intermeeting move prior to March 25, or a deeper cut of 50 basis points . In line with the downgrades to our economic outlook, the bank now sees the policy rate being cut further by 25 basis points each in Q2 and Q3, taking the rate to a record-low 0.25 per cent at end of this year.

However, the BOT faces limitations on its ability to be as dovish or aggressive as other central banks. Further deep cuts without a clear positive impact or the desired market response could risk complicating the BoT’s monetary policy-making ability. Policy rates below 0.5 per cent could create transmission difficulties, with banks unable to match the BOT cut, given their mandatory contribution to the bailout fund as the central has yet to announce an adjustment to the contribution, he said.

At this stage, the Standard Chartered bank expects the central bank to provide assurances that policy will remain accommodative for as long as needed, along with verbal intervention in the FX market, though this is not needed given current under-performance of the baht and liquidity measures. "In this context, we believe fiscal policy needs to do more of the heavy lifting to support the economy and avoid the need for zero or negative interest rates; fiscal stimulus measures announced so far appear to have had limited effectiveness, according the bank.