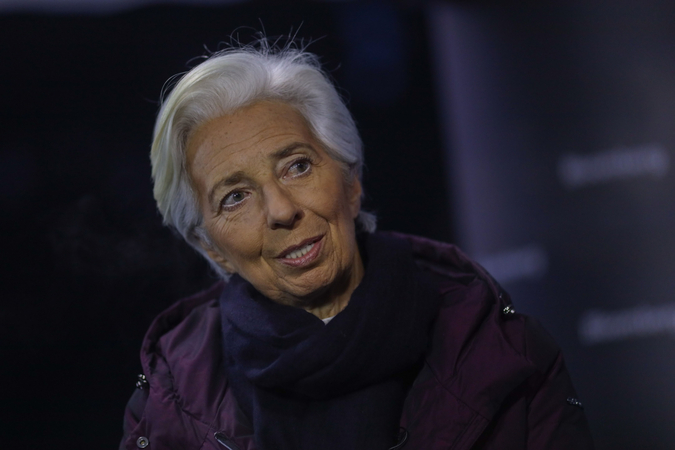 Christine Lagarde, president of the European Central Bank. speaks during a Bloomberg Television interview on the closing day of the World Economic Forum (WEF) in Davos, Switzerland, on Jan. 24, 2020. MUST CREDIT: Bloomberg photo by Simon Dawson.

European government bonds from Italy to Greece surged after the European Central Bank launched a 750 billion euro ($820 billion) debt-buying program to keep borrowing costs in check as countries prepare to increase spending to counter the impact of the coronavirus.

Yields plummeted, led by a more than 200-basis-point drop for Greece's five-year bonds, narrowing the gap between the debt of the euro-area's strongest economies and the more stressed. The region's corporate debt risk dropped the most since 2016.

The ECB decision in an unscheduled meeting on Wednesday night is the latest in an escalating global response to an outbreak widely seen driving the economy into recession. President Christine Lagarde reinforced the message that policy makers will do all they can, saying there are "no limits to our commitment to the euro."

"The ECB was forced to react quickly," Christoph Rieger, head of fixed-rate strategy at Commerzbank, wrote in a note to clients. "The new envelope of 750 billion euros should help bring in spreads more lastingly, but it is questionable whether this will be the turning point of the broader financial market rout."

European officials are weighing activating a regional bailout fund to help nations with strained public finances. Investors have been pushing up bond yields as they fret about the cost of the massive fiscal response to the pandemic. Italy, which already has a huge debt burden and is the worst-affected by the disease, is especially hard hit.

The ECB last week agreed to pump more liquidity into the financial system and joined other central banks in a bid to ease a funding squeeze. The measures on Wednesday include:

- Buying public and private-sector securities until at least the end of 2020.

- Program will cover all assets eligible under current quantitative-easing program, and will be extended to commercial papers of sufficient credit quality.

- Greek government debt will be included.

- Collateral standards will be eased.

- Program will continue until ECB judges the crisis phase of the pandemic to be over, but not before the end of this year.

- The ECB will consider raising its self-imposed limits on QE holdings, and will increase the size of its programs if needed.

While the package was broadly welcomed, many said more needs to be done, particularly from governments.

In its statement, the central bank said it "will not tolerate any risks to the smooth transmission of its monetary policy in all jurisdictions of the euro area."

Venturing into the commercial-paper market is a novelty for the institution. In doing so, policy makers are taking a page out of the Federal Reserve's book.

The decision to consider raising the limits on QE holdings could be controversial. The caps, set at the start of the program in 2015, are meant to address concerns the central bank would breach European Union law by financing governments.

Lagarde's predecessor, Mario Draghi, argued last year the Governing Council could loosen standards if economic circumstances warrant it. Taking that step in the immediate future faces one key complication -- a German constitutional court ruling on the legality of QE is just weeks away.

"Within the realm of what monetary policy can do, the ECB is now seriously tackling the two key issues facing economic policymakers," said Holger Schmieding at Berenberg. "Easing the liquidity crunch in the economy and helping governments to finance their response to the health emergency."

If euro-area officials were to activate the region's bailout fund, that would be a crucial step toward triggering the ECB's most powerful bond-buying power -- Outright Monetary Transactions. That program was designed during the bloc's debt crisis in 2012 to purchase the debt of specific nations.

It grew out of Draghi's "whatever it takes" pledge, but has never been used.