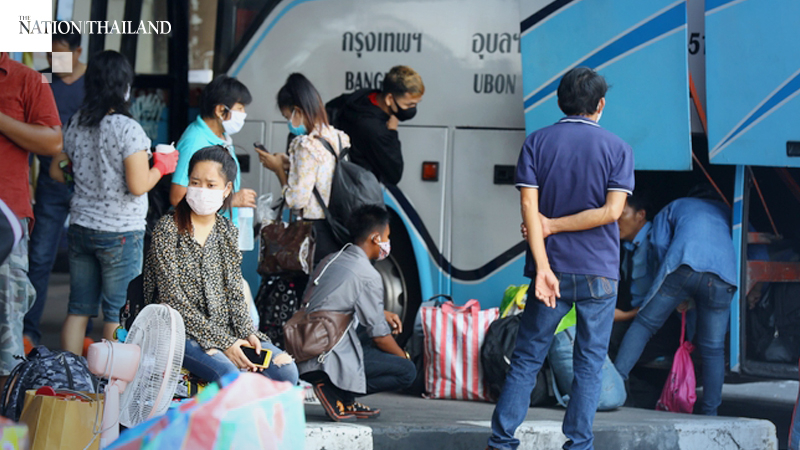 A large number of Thai labourers and migrants leave Bangkok for their hometowns, as many businesses in the capital temporarily shut down.

The government must quickly mobilise national resources to prevent the spread of Covid-19 and urgently and adequately provide financial support to low-income groups affected by the impact of the pandemic. Thailand Development Research Institute (TDRI), an independent think-tank, urged the government to step up efforts both to contain the virus and help the poor.

The research house said the government has to give priority to prevent the spread of the virus, deploying sufficient resources to deal with the pressing issue. The government has to ensure efficiency of screening, monitoring and quarantine of those who could spread the disease as they travel across the country now.

Patients have to be given proper treatment. Overtime payments, life insurance and health insurance coverage must be offered to medical personnel.

“The government should not worry about short-term fiscal position or economic growth in the short-run, but instead give top priority to public health,” said the research house.

It warned that given the rising number of new Covid-19 cases, Thailand may soon enter a crisis situation where the country's health infrastructure may not be able to handle the outbreak and potentially lead to loss of many lives, as has happened in some countries.

The TDRI urged the government to provide adequate and timely support for low income and unemployed people. The government plans to extend the coverage of Social Security Fund to include unemployment caused by communicable disease, but that is not sufficient, said TDRI. It suggested that the government also look after those who currently are not covered by the fund. For example, taxi drivers account for 70 per cent of the informal labour force, said TDRI.

Every Thai family should be given cash handouts by the government. For example, a family with one or two members should get Bt1,500 per month for three months, those with three to four members Bt2,500 per month, and Bt500 for each extra member.

The Finance Ministry should review the database of its welfare card programme by cutting out families with higher income such as owners of land and property worth more than Bt3 million, those saving more than Bt100,000 per annum or those having salary above Bt15,000 for each member of the family. So the eligible families could be estimated to be about six to seven million, TDRI said.

The government is urged to support small and mid-sized businesses throuh rent assistance or partial labour cost in order to prevent layoffs.

The government should also cancel subsidies on tap water and electricity bills because such a support is not benefiting the right targets and even rich families are able to avail of the subsidies.