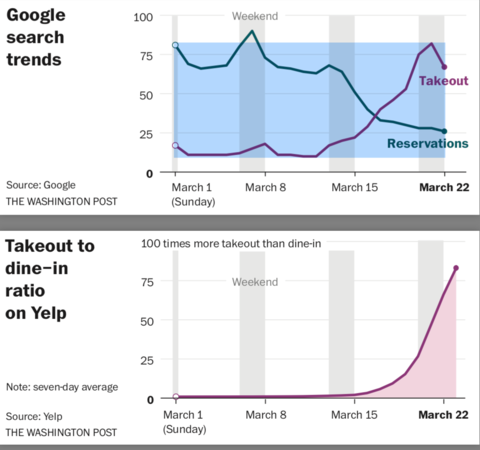 The pandemic economy is taking shape. Beer, butchers, building supplies and blood-donation centers are popular. Buffets, breweries, bridal and bowling are not. And that's just the letter B.

With every passing second, we learn more about how the coronavirus eviscerated the U.S. economy, thanks to the cottage industry that has sprung up around tracking the crisis in real time. These new sources are being widely cited as traditional economic data lags and the public and policymakers grow desperate for numbers. 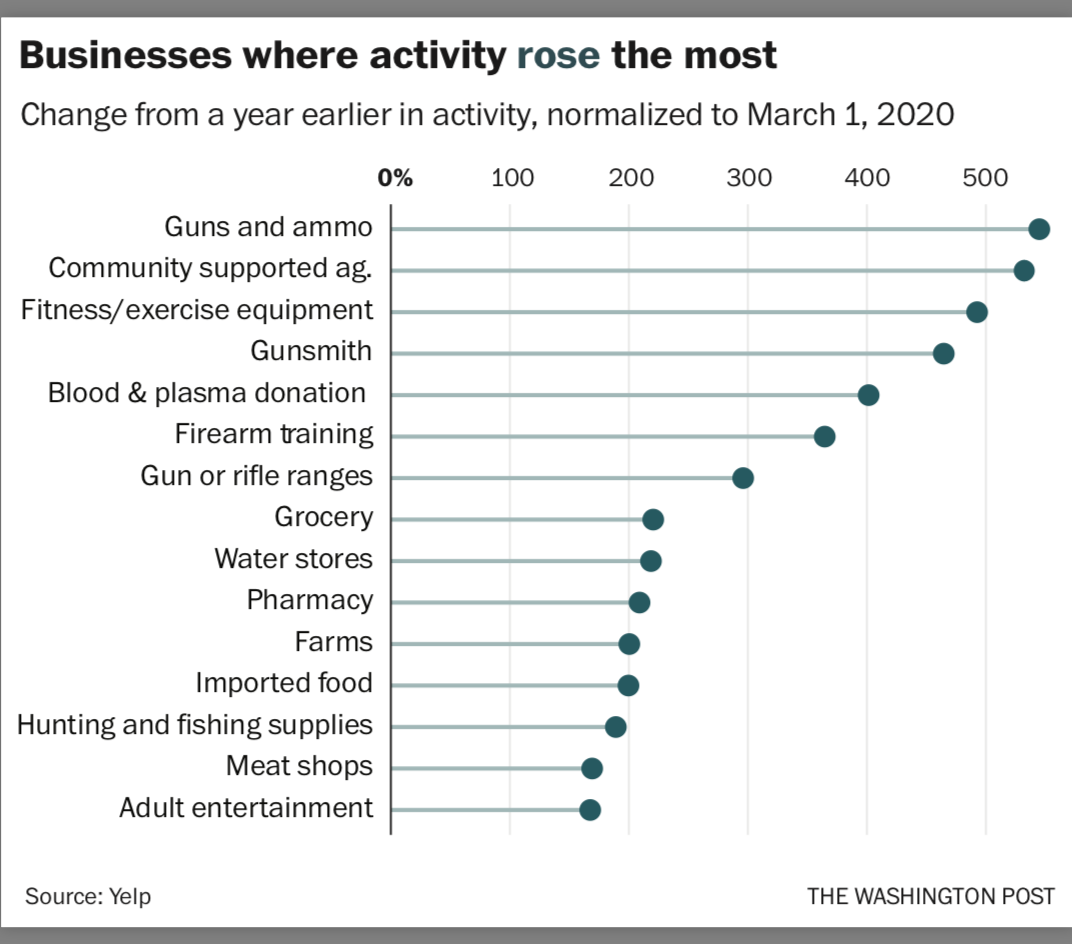 In one such effort, Carl Bialik, data science editor at the online review giant Yelp, measured how consumer interest - visiting pages, writing reviews, posting photos - in the site's 500 largest categories changed from the beginning of March, when the country had fewer than 100 cases of the coronavirus, to early this week, when cases neared 50,000. 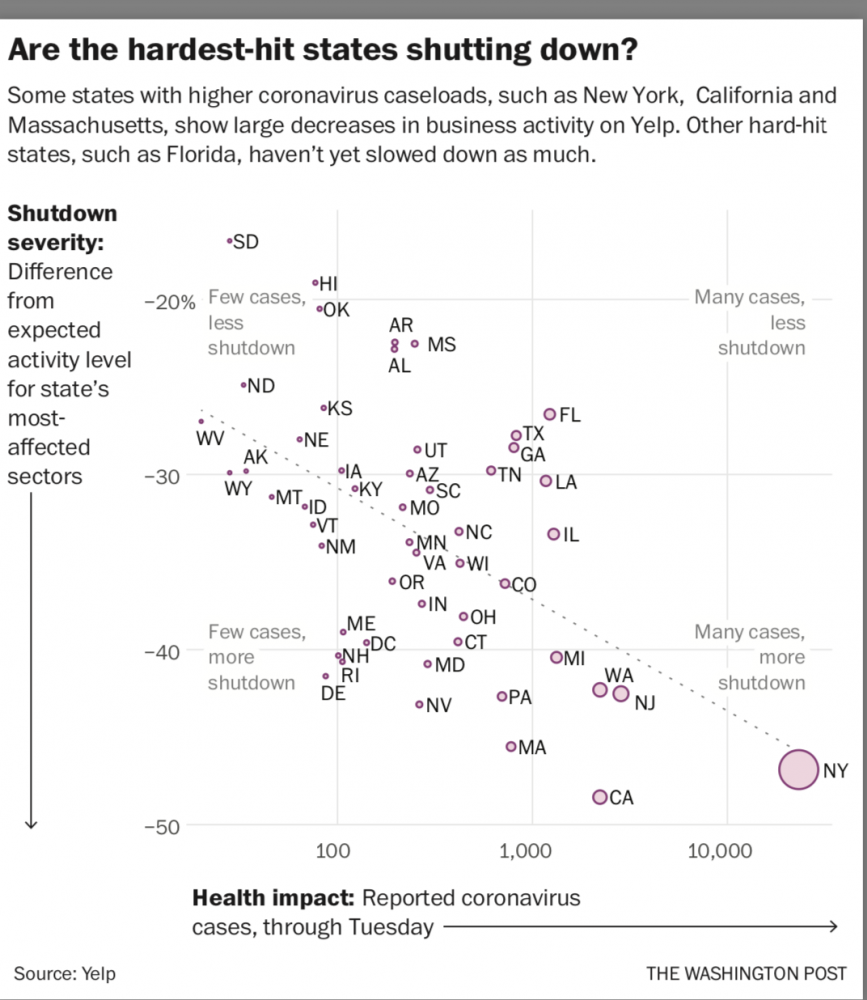 It reveals an inverted world. People are less interested in mortgage and tax services, and more interested in payday loans. Interest in amusement parks has cratered; interest in rifle ranges has soared.

The fastest-rising categories sound like a checklist to prepare for post-apocalyptic survival. People are seeking out weapons, hunting and fishing supplies, and fitness gear, while stockpiling water, meat, pharmaceuticals and groceries. 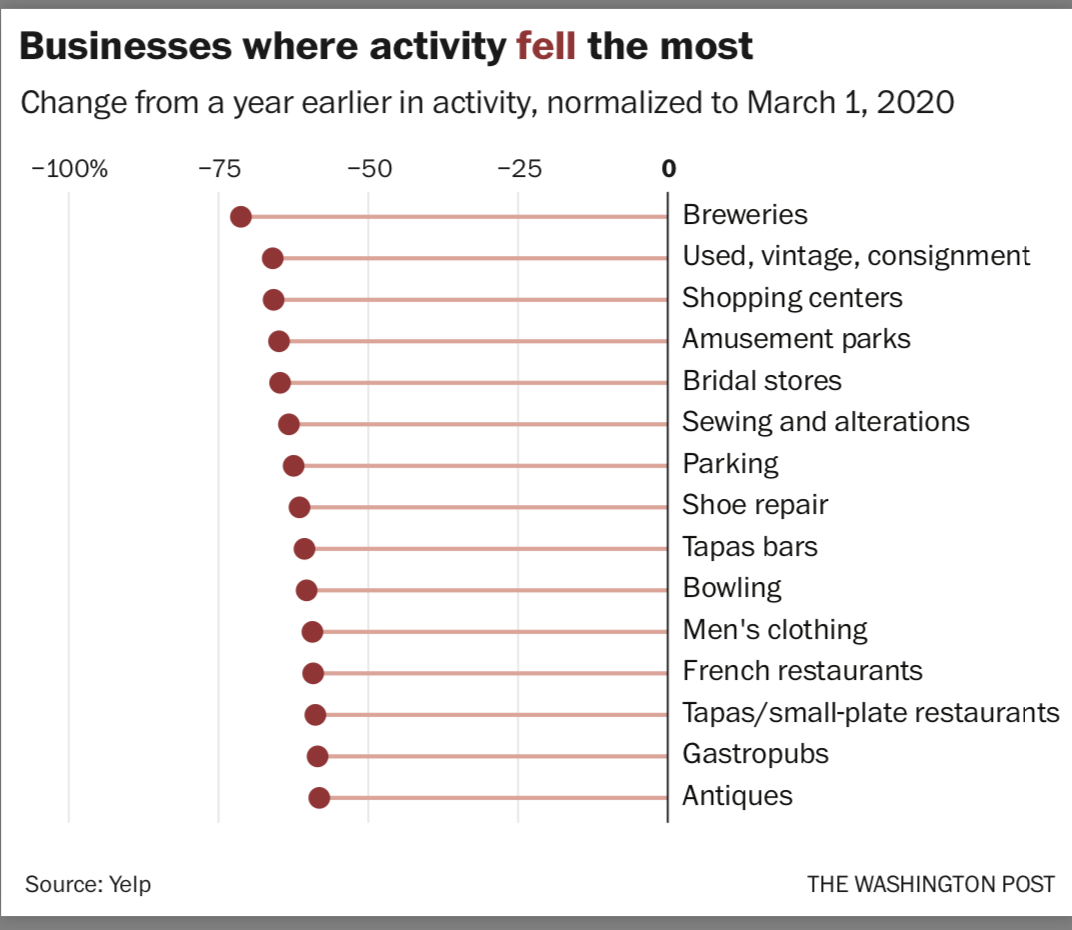 Among the more hopeful indicators? The surge in interest in community-supported agriculture, which was already reported by Theresa Davis in the Albuquerque Journal.

"Working with the earth and having as few hands as possible touch our produce feels good right now," Andrea Romero of Tierra Sagrada Farm told the Albuquerque Journal.

The fastest-falling categories, meanwhile, confirm what we already knew about this service industry-driven downturn. As governments continue to restrict Americans' movements in a bid to slow the spread of the coronavirus, retail and food services are taking it hard. For businesses that rely heavily on bar sales, from breweries to gastropubs, customer interest has evaporated.

Entertainment is getting walloped as well, with amusement parks and bowling alleys both among the 15 segments hit hardest. Establishments such as these have been among the first to be closed by states as they batten the hatches in preparation for an outbreak.

How rapidly have things changed? As of Monday, the ratio of dine-in to takeout searches on the site was 83 times higher than it had been in the first week of March.

Google searches show the same trend. On the search engine, "takeout" overtook "reservations" around March 17. As with all of the new generation of real-time sources, we try to confirm patterns with multiple sources, and look at the direction and magnitude of the change rather than at precise levels.

Yelp paints a portrait of a country struggling to adjust to new emergency restrictions. By their measure of social distancing, which focuses on peoples' activity at businesses, there are big differences in the patterns of peoples' business-related activity - even in places with similar infection levels.

Activity in the sectors hit hardest in New York and California has fallen to about half of where Yelp would expect them to be at this point in a normal year. Meanwhile, other states with high caseloads, particularly southern ones, such as Florida, are seeing much smaller declines.

According to a report from the left-leaning Economic Policy Institute, the South's ability to respond to the pandemic has been hamstrung by a lack of paid sick leave policies, and the refusal of most Southern states to expand Medicaid.