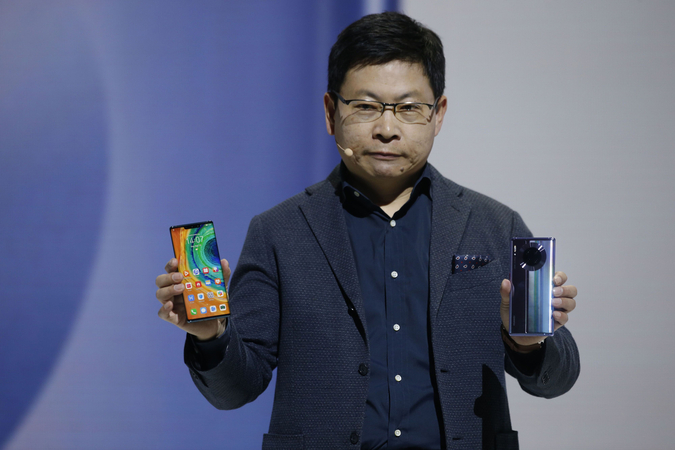 Huawei Technologies is about to test the demand for flagship smartphones in China, and the chief executive officer of its consumer business said he's confident markets and manufacturers are ready.

Richard Yu said that the Chinese government's strict limitations on public mobility at the start of the year to bring the spread of Covid-19 under control are beginning to relax as the virus has died down, and the country is open for business again.

"It's under control and most stores are open," he said in an interview on Thursday ahead of the company's launch of its P40 range of flagship smartphones. "The supply chain and manufacturing in China has recovered."

The covid-19 outbreak is just the latest in a number of high-profile existential challenges to Huawei. The company's also been battling global scrutiny over its telecom equipment, and was added to a U.S. government blacklist that blocked it from using popular versions of the Android operating system.

Yu said he's confident a relationship with the U.S. can be rebuilt.

"We want to continue our partnership with Google," he said, adding that Huawei is in discussions with the Alphabet Inc. company. "We hope this issue can be solved, but we're not the government so we can't make the decision. They're a smart government, and I hope they can give a license."

In the first quarter of 2020, amid the novel coronavirus's rapid spread across the globe, shipments of Huawei's wearable devices grew 75%, while PCs and wireless earphones grew about 110% and 150% respectively, a spokeswoman for the company said.

Yu said one significant contributor to the growth of these products was the large number of people working and going to school from home.

Still, demand for smartphones is slowing, and manufacturers are trying to find new ways to convince consumers they should upgrade their devices. Bendable products are an increasingly popular strategy being tried out by some of the world's biggest device makers, including Huawei.

In February, it announced a second-generation version of its Mate X folding phone, which up to that point had been sold mostly in its home country. Yu said the phone isn't profitable, but demand is outpacing supply.

"With time and more production we can bring the cost down and make it more competitive," he said.

Yu also said that the P40 -- which comprises three models with a range of features and price points -- is the first Huawei smartphone to only support fifth-generation, or 5G, networks.

Ben Wood, chief of research at analyst group CCS Insight, said that although "arguably there could not be a worse time to launch a set of premium smartphones, Huawei may be in a better position than some rivals."

Wood agreed that indications are that Huawei's home market is starting to recover from the impact of Covid-19, and "given that Huawei has been shipping over 40 million units a quarter in China in recent times, this provides a strong foundation for the business."

The P40 range announced Thursday sits at the top end of Huawei's product line and comprises three variants: the P40, P40 Pro, and P40 Pro Plus. They all feature high-resolution multi-lens camera systems, and the top models include screens that curve at the edges.

The phones also introduce Huawei's Celia voice assistant as an alternative to the Google Assistant, which as a result of the U.S. trade embargo isn't available on the open-source version of Android used by Huawei for the devices.

As the covid-19 pandemic continues to spread across Europe and the U.S., Yu said he's hopeful governments in affected countries would be able to contain the crisis.

"I hope the U.K. and the world recovers soon from coronavirus," he said. "The experience from China was that the government very strictly limited the mobility of people, and quickly everything came under control. I think governments in the rest of the world are taking action like China and will quickly control it too."