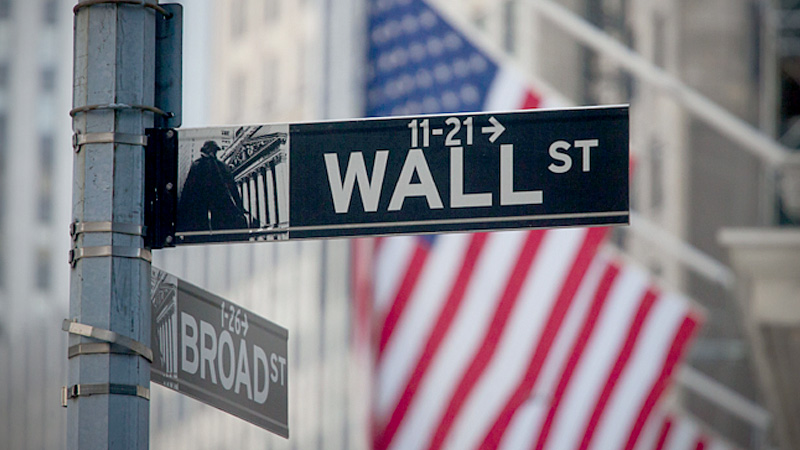 Wall Street concluded two ferocious weeks on Friday as the national shutdown in response to the coronavirus delivered crushing losses to investors.

Hourly updates on the virus death toll and the massive government interventions to save the U.S. system drove investors to panic selling and spurts of buying. Huge stock swings set marks not seen since the Great Depression, erasing trillions of wealth in a few hours.

Friday's passage of a $2.2 trillion package designed to tide the nation over until the economy restarts has yet to quell a population fretting over its financial future.

"There's a lot of uncertainty in the world over the virus and over people's concern for their financial prosperity," said Sarat Sethi of Douglas C. Lane & Associates. "We are experiencing a humanitarian crisis and a financial crisis at the same time, and that is being expressed through massive volatility in the markets."

The Dow Jones industrial average finished Friday with a more than 900-point loss. The Dow is at 21,636, down more than 24 percent for 2020 and way off its all-time peak on Feb. 12. The losses may have been worse, but multitrillion-dollar rescue packages this week from the Federal Reserve and Capitol Hill sparked a robust midweek rally that was its second-best three-day run in history, and dragged the blue chips back above the key 20,000 threshold.

Despite Friday's loss for the day, the Dow enjoyed one of its best weeks since the Great Depression. The week before was one of its worst.

"The speed and breadth of these moves is mind-boggling," said Howard Silverblatt of S&P Dow Jones Indices. "We've never seen percentage moves of this size. Stocks are moving on every piece of data that comes out."

The Standard & Poor's 500 index and the Nasdaq composite finished down 3.4 and 3.8 percent, respectively. The S&P posted an 10.2 percent gain this week, but is still down more than 21 percent for the year. All three indexes are deep in the red for the first three months of 2020.

Even as the $2.2 trillion rescue package went to the White House Friday afternoon for the president's signature, the pandemic's toll continue to mount by the hour. The United States now has the most confirmed cases in the world and has surpassed 1,000 deaths. A record 3.3 million Americans applied for unemployment benefits last week, according to the Labor Department, and economists say more than 40 million Americans could lose their jobs by mid-April.

All but two of the Dow's 30 shares were down Friday morning. Boeing was leading the pack into the red with an 8 percent pullback. Boeing's stock had nearly doubled this week on the expectation that it will benefit from the federal relief package.

Analysts caution that stocks are far from recovery and that investors should brace for significant drops even lower than markets have recently seen.

"Don't be too quick to uncork the champagne," said Sam Stovall of CFRA Research. "Friday's slide tells us that investors are taking profits before the weak data that is surely coming sends stocks back down to retest their lows."

All 11 S&P stock market sectors were negative on Friday and most are down at least 10 percent on the year. Energy has been hit the hardest, dropping by about half. With airlines, trucking and automobiles virtually shut down due to the coronavirus, oil demand has evaporated. Some oil experts have speculated that oil prices could descend below $10 per barrel, a price not seen in nearly half a century. Gas prices at the pump have dropped to 99 cents in some places.

"If we go below $10 for any extended period, it will be devastating to the entire industry from small to big players," said John Kilduff of Again Capital. "Many will go bankrupt. But it will also send a shudder through consumers, who will realize that there must be something much bigger that is wrong with the economy for demand to be so low."

Thursday's rally led to the Dow to close up 1,352 points, or 6.4 percent - capping its second-best three-day run in history. With Thursday's close, the blue chip index had climbed 21.3 percent since Monday.

"It's clear we are going to see extreme volatility as markets are buffeted by horrible economic and health data on the one hand and significant stimulus initiatives on the other hand," said Kristina Hooper, Invesco chief global market strategist.

Asian stocks were on the upswing. Japan's Nikkei 225 ended the day with gains of 3.88 percent. Hong Kong's Hang Seng ticked up 0.56 percent, and the Shanghai composite 0.26 percent.

A new report released Friday on consumer sentiment didn't help stocks. The University of Michigan's consumer survey fell to its lowest level since October 2016 in another sign that the coronavirus is decimating the economy.

Chris Rupkey of MUFG Union Bank said the survey, while bleak, doesn't yet offer a full picture of where the economy is headed.

"The economy plainly is facing the darkest days ever," Rupkey said. "No one is flying airplanes. No one is taking vacations. No one is going to the shopping mall. This economy is going to tank and the consumers who took this month's survey are plainly just deers looking into the headlights completely unaware about the disaster that is about to hit them."

With an economic stimulus bill on the way, "attention will turn back to the health cris

"More bad headlines are coming, more people's health will be negatively impacted, which will negatively affect investor psychology," Wicker wrote. "That will provide opportunities to get back in the market if you feel you've missed it."