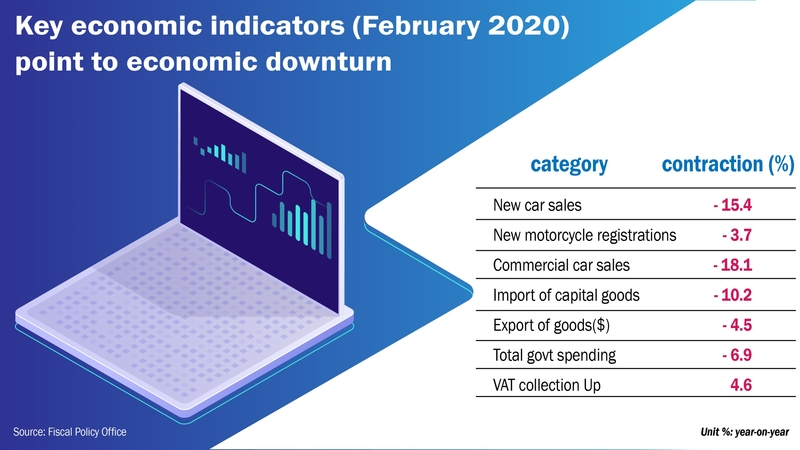 Indicators in February pointed to an economic downturn under impact of the Covid-19 pandemic, battering the domestic economy and Thai exports, according to the Finance Ministry.

The contraction in spending on durable goods indicated consumers were not confident of their future incomes as reflected by the slide in consumer confidence index to 52.5.

Private investment also ran out of stream with import of capital goods and commercial car sales fell by 10.2 per cent and 18.1 per cent respectively. Real estate sector was also hit hard as evidenced in the 18.8 per cent contraction in tax collection from property transactions.

Export of goods in dollar term last month contracted by 4.5 per cent , resulting from the fallout of Covid-19 on the economies of Thailand's trading partners. When taking out special items such as gold, oil products, weapons, Thai exports expanded 1.5 per cent year on year in February.

Tourist arrivals in February plunged 42.8 per cent to 2.06 million, of whom the number of Chinese tourists plunged 84.9 per cent as the coronavirus spread from that country to most nations in the world.

Manufacturing index contracted 5.2 per cent as the production volumes of car, sugar and plastic pellet fell. However, medicine, frozen sea food and beverage saw expansion during the month.

Farm production index contracted by 4.5 per cent due to the twin impact of drought and overall economic slowdown.

Public debt to GDP at the end of January stood at 41.3 per cent, indicating a relatively solid fiscal position , but is expected to rise as the government needs huge funding to cope with the virus fallout. International reserves at the end of February amounted to $229.5 billion, providing a cushion for Thailand amid turmoil in the global financial market and strengthening of the dollar against the baht and other currencies.

Total public spending in February contracted by 6.9 per cent and capital spending plunged 76.5 per cent due largely to the delay in the passage of fiscal budget 2020. Spending is expected to be disrupted as the government may reallocate financial resources to mitigate impact of the virus. .

Most research houses predict Thailand will face a economic recession this year while Bank of Thailand forecast a 5.3 per cent contraction in GDP.