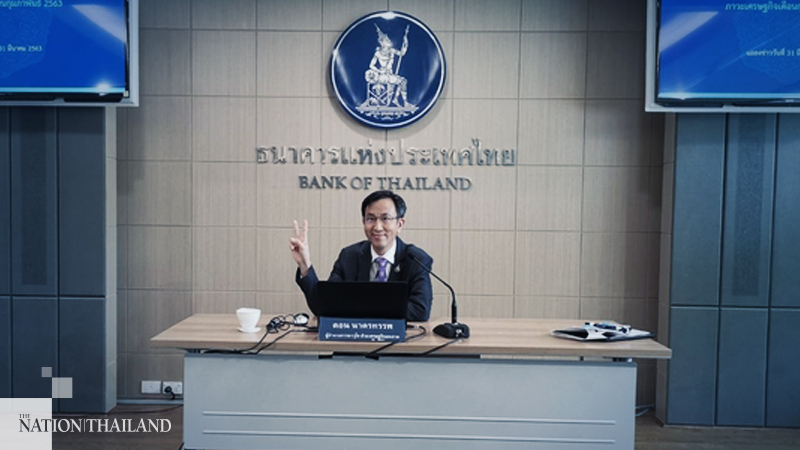 Don Nakornthab, senior director at the Bank of Thailand.

Economic contraction is expect to bottom out in the second quarter , following the downturn in February, says the central bank.

Don Nakornthab, senior director at the Bank of Thailand, said on Tuesday (March 31) that economic and financial activities in February sharply contracted from the same period last year.

However if the government injects extra Bt400 billion into the economy under a new stimulus package, it could boost economy by  2-3 percentage points, he said.

The Covid -19 outbreak affected the Thai economy in more pronounced ways during the month, particularly the tourism sector which sharply contracted. The outbreak also impacted merchandise exports and imports as a result of China’s lockdown. Public spending continued to contract. But private consumption continued to expand from accelerating purchases on necessary consumer goods. As a consequence of the decline in economic activities, manufacturing production and private investment also contracted.

“The contraction is expected to further deteriorate in March and following months with the deepest contraction expected in the second quarter,” he said, adding that less severe economic shrinking will be in third and fourth quarters and full year contraction is estimated to be 5.3 per cent. Then it will start to recover next year, he said. The forecast took into account two economic stimulus packages worth Bt 400 billion, but not the government's plan to launch larger stimulus package in the future, Don said. The government initially estimated 3 million people would register for the cash handout of Bt5,000 each for the next three months but the number has since crossed the 20 million mark .

The forecast was based on the assumption that the government could contain the virus outbreak in the second quarter, then economic activities would gradually resume and some foreign tourists would return. Vaccine against coronavirus is expected to be successfully developed next year, he added.

The baht has depreciated against the US dollar as investor sold Thai stocks and bonds while weakening of the Thai currency may be positive for farmers as exporters could sell more farm products due to lower prices, he said. Baht was moving around Bt32.60 a dollar in spot market on Tuesday.

He expressed concerns about the welfare of labourers who may be laid off and lose their income due to business closures.

Those employed by hotels, restaurants, travel agencies and related businesses are hard hit by the global lockdown.

In February, the number of foreign tourist arrivals contracted 42.8 per cent from the same period last year in almost all nationalities. In particular, the number of Chinese tourists severely contracted due to the announcement of the Chinese government to shut down many areas and ban outbound group tours travelling abroad in order to contain spreading of Covid-19. However, the number of Russian tourists continued to expand because the situation in their country not was not serious in February. Number of tourists in March amounted to a mere 600 after the ban on hotel room bookings, he said.

The value of merchandise exports in February expanded 3.6 per cent from the same period last year. Excluding gold, the growth in export value also remained negative at 1.3 per cent due to the slowdown in external demand. Moreover, the virus outbreak and China’s lockdown measures resulted in a significant drop in economic activities in the country, particularly private consumption, manufacturing production and merchandise transportation. Consequently, Thai exports to China considerably contracted especially agricultural items, particularly fruits, as well as petrochemical and chemical products. Furthermore, exports of gems and jewelleries to Hong Kong contracted due to a decline in export orders. However, exports of electrical appliances and hard disk drive continued to expand, thanks to the relocation of production base to Thailand in the previous periods.

Public spending, excluding transfers, continued to contract from both current and capital expenditures of the central government as a result of the delayed enactment of the FY2020 budget. Meanwhile, state enterprises' capital expenditures contracted from disbursement of energy-related agencies.

Private consumption indicators expanded from the same period last year on the back of spending on non-durable goods, attributed to the acceleration in purchases on necessary consumer goods amid concerns over the Covid-19 outbreak. Nevertheless, spending on other categories contracted, especially services expenditure for hotel and restaurant as well as transportation, partly because people avoided going outside. Additionally, spending on durable goods further contracted from vehicle sales to others.

This was consistent with weakening supporting factors, including household income, employment and consumer confidence, while debt burden remained high.

Private investment indicators contracted at a higher rate from the same period last year mainly due to imports of capital goods from China. At the same time, other indicators reflecting investment in machinery and equipment and investment in construction contracted in line with softening domestic and external demand as well as deteriorated business sentiment from the Covid-19 outbreak.

The value of merchandise imports contracted 7.8 per cent from the same period last year

There were contraction in almost all categories including raw materials and intermediate goods, capital goods and consumer goods, particularly imports from China as a result of their lockdown measures. Manufacturing production contracted in line with softer demand. Nonetheless, the impact of China-linked supply chain disruptions on Thai manufacturing production in February was not apparent because firms had sufficient inventory of raw materials and parts for production.

On the stability front, headline inflation stood at 0.74 per cent, decelerating from the previous month on the back of a decrease in energy prices following drops in global crude prices. Meanwhile, core inflation edged up. The current account registered a higher surplus at $ 5.4 billion, up from 3.4 billion in January, as a result of a significant drop in merchandise imports value despite a decline in travel receipts. The overall capital and financial accounts registered a deficit from both the asset and the liability positions. The former was mainly from portfolio investment abroad by Foreign Investment Funds (FIF) and other depository corporations (ODCs). The latter was mainly due to short-term loan repayment by ODCs to adjust their foreign currency position and the net sell in debt securities by foreign investors, consistent with the portfolio investment trend in regional countries.

“Baht is expected to further depreciate while the current account is to shrink in March as foreign tourist arrivals plunge,” he added.