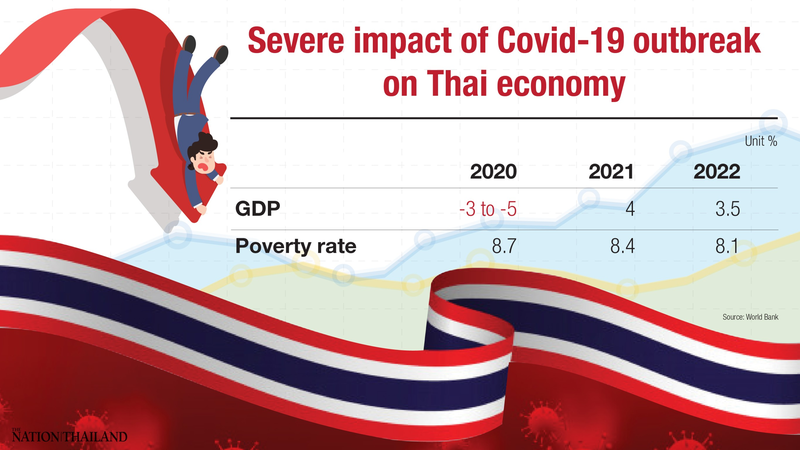 The impact of the Covid-19 outbreak will be severe beyond expectation, the World Bank warned but added it was confident that Thailand has the financial resources and innovative policies to deal with the challenges.

Thailand's gross domestic product is forecast to be in negative territory -- between -3 and -5 per cent this year -- Kiatipong Ariyapruchya, World Bank’s senior economist for Thailand, said on Thursday (April 2).

This would lead to contraction of household consumption, private investment and exports, he said, but was optimistic the economy would recover next year and in 2022, with GDP estimated to expand 4 per cent and 3.5 per cent respectively.

“The challenge would be much bigger than anyone expected,” Birgit Hansi, World Manager of Thailand, said and added that impact would be faced in many areas, including tourism on which Thailand depends a lot.

She, however, was confident that the country had the fiscal space to deal with it. Thai public debt is relatively small compared to its debt during the previous crises and decades, placing Thailand in a better position to deal with challenges, she said.

She backed the Finance Ministry and the government's previous two economic packages and the proposed third stimulus. One package cannot cover all issues, and innovative policies are coming from Thailand and other countries, she said.

She suggested that workers in the informal sector needed financial support quickly while the government also needed to design a stimulus package for the next six months for a longer period.

She praised the Bank of Thailand's efforts to cushion the impact of the crisis and believed in the strength of financial sector.

The World Bank said that the medium-term outlook was subject to high domestic and external downside risks. The main risk is that the impact of the Covid-19 outbreak may be more severe locally and globally.

The current crisis is expected to increase Thailand’s rate of poverty to 8.7 per cent of total population, up from 8.4 per cent last year, he warned.