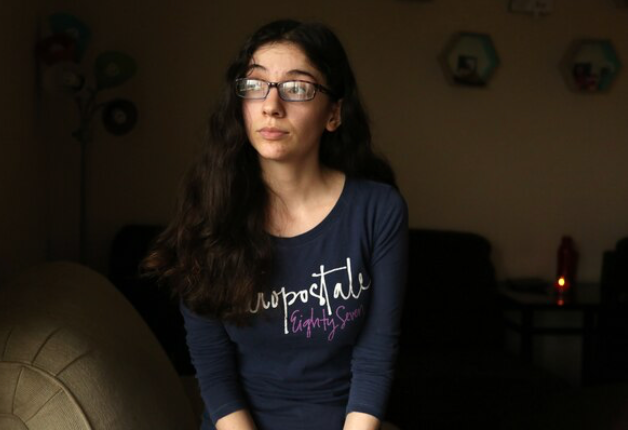 Mercedes Addington lost her job March 23. While she was initially approved for unemployment benefits, her status is in limbo after being suspended. MUST CREDIT: Photo by Christoper Smith for The Washington Post

The coronavirus recession is shaping up to be the biggest blow to the U.S. economy since the Great Recession, and fears are rising that it could take years to reverse the damage, especially for millions of Americans who are losing their jobs and businesses.

The past two weeks have wiped out all the economy's job gains since President Donald Trump's November 2016 election, a sign of how rapid, deep and painful the economic shutdown has been on American families struggling to pay rent, prescriptions, food and health insurance in the middle of a pandemic.

More than 6.6 million Americans applied for unemployment insurance benefits last week, the Labor Department reported Thursday, on top of the 3.3 million claims from the week before. These numbers have never been seen before in U.S. history and reflect the widening closures and shelter-in-place orders that have put the economy in a deep freeze to slow the spread of the deadly coronavirus.

What is becoming clear is the job losses are happening in nearly every corner of the economy, and people are likely to be out of work for months. If past recessions are any guide, it normally takes years to get all those people back to work again. And there are lingering effects as people lose homes and cars, take on debt and suffer from mental health issues.

The Economic Policy Institute predicts nearly 20 million Americans will be out of work by July, which would be the worst unemployment situation the United States has faced since the Great Depression. Even the normally cautious Congressional Budget Office predicts the unemployment rate will exceed 10 percent.

The massive aid packages Congress passed in March will help, many say, but Goldman Sachs still predicts a 9 percent contraction in the first quarter and a 34 percent contraction in the second quarter. About half of those losses could be recovered by the end of the year, as Americans eagerly start eating out and getting hair cuts again. But, there will still be a lot of pain left in the economy.

Hotels, restaurants, malls, hair salons and theaters have been among the hardest hit. On Thursday, JC Penney began furloughing the majority of its 90,000 employees. Also, industries often considered recession-proof, like white-collar education, health care and transportation are also seeing furloughs and layoffs. Aerospace giant Boeing on Thursday began offering buyouts to its nearly 100,000 U.S. workers, and radio broadcaster Entercom Communications said it would lay off or furlough a "significant" portion of its 2,800 employees.

The U.S. unemployment rate has likely jumped to 10 percent already, economists say, putting it on par with the worst month of the Great Recession and the painful 1982-83 recession. It's a massive and abrupt spike from February, when the rate was at half-century low of 3.5 percent.

"Without further assistance from the federal government, there are going to be huge negative effects," said economist Ben Zipperer of the Economic Policy Institute. "When workers lose their jobs or businesses are forced to shut down, the losses add up. It's harder for someone to get a job in the future. Debt piles up. And that leads to horrible health and psychological effects."

The Labor Department is slated to release the March unemployment rate on Friday, but economists say it won't reflect the true picture since that data comes from March 12 - before President Trump's national emergency declaration and most of the statewide shutdowns, including the first epicenter of Washington.

Unemployment really started spiraling downward these past few weeks. And the stunning weekly jobless data out Thursday doesn't even capture the most recent furloughs from Macy's, Gap and Gannett. Some furloughed workers are beginning to find that those temporary furloughs are turning into permanent job losses.

Steaven Sanchez, 26, was furloughed from his job as a wheelchair assistant at Orlando International Airport two weeks ago, shortly after Trump announced restrictions on international travel. Managers took his badge but said they would be in touch, when business picked up. Earlier this week, he got an email saying he'd been laid off permanently.

"Everything happened so quickly," said Sanchez, who is planning to apply at local grocery stores to make ends meet. "I'm just taking this day by day. Everything is so unsure right now."

Sanchez lives with his parents and said money has been tight for them as well.He has tried to apply for unemployment benefits for days but has yet to get through.

Economists think the true number of laid off workers is likely higher than the nearly 10 million who filed jobless claims in March, since so many people have not been able to complete their application as state unemployment office websites crash and phone lines are swamped.

Congress allocated nearly $1 billion in additional funding to states to help them beef up their unemployment insurance offices, plus $260 billion to hike the weekly unemployment check amount by $600. But the Labor Department is struggling to get that money to out as the federal government struggles to move at the speed necessary to address the pandemic.

"We were finally starting to save. Debt was finally getting paid off," said Emily Ray, who runs a small pain management massage business in Mystic, Connecticut. "And now we're watching everything go to crap again."

Now, she and her husband, who is nearing retirement, are out of work again.

Steven Ray was furloughed in mid-March from his job as a lighting director at a Mohegan Sun casino. He applied for unemployment benefits two weeks ago but is still waiting for his application to get processed. Emily Ray has had to lay off her three employees. In addition, her two sons, ages 23 and 21, are back at home, too. One was laid off, the other is home from college and neither will get the $1,200 relief checks.

"There are huge gaps in the stimulus package," Emily Ray said. "I could take out a small-business loan, but right now I don't even know if my business is going to survive."

Half of small businesses only have enough cash to cover about 15 days worth of expenses, according to the JPMorgan Chase Institute. As the pandemic has spread to so many sectors, nearly one out of five small and medium-sized businesses are at risk of bankruptcy, said Joseph Brusuelas, chief economist at audit firm RSM that specializes in the midsized market. As businesses close, they won't rehire workers.

"Firms with less than 100 people are the ones that really need the help," he said.

Another factor that could stymie the recovery is that some of the U.S. counties hardest hit by the coronavirus are large cities like New York, Los Angeles, Chicago, Seattle and Detroit that have powered the national economy. The 50 counties with the most cases support 60 million jobs and over a third of the U.S. economy, according to a new report by the Brookings Institution.

"The density of these cities makes it harder to push start again on the economy until it's clearly safe," said Mark Muro, policy director of the Metropolitan Policy Program at Brookings.

The economic pain is spreading across the country to cities that aren't seeing a big outbreak, a reminder of how interconnected supply chains are.

Mercedes Addington lost her job on March 23 at a company that sells trucking parts and supplies in Kansas City, Kansas. Even though the business was considered "essential" during the crisis and orders were still coming in, the company laid off most of its employees.

"I am very frustrated and scared," she said. "I have bills to pay soon and I was counting on this money to get by."

Addington, 21, lives in a modest apartment with her boyfriend. They pay $800 in monthly rent. The landlord was willing to give them a break in April, but only if they could prove Addington had applied for Kansas unemployment benefits.

She applied right away and received a notice saying she was approved. But when she checked the website again this week, it said her benefits had been "temporarily suspended," leaving her in limbo for rent and other bills.

Repeated calls to the Kansas unemployment office went unanswered. She is now unsure what to do.

"If I don't risk it and go back to work somewhere, I'm not sure that I'll still have a home to come back to," she said.