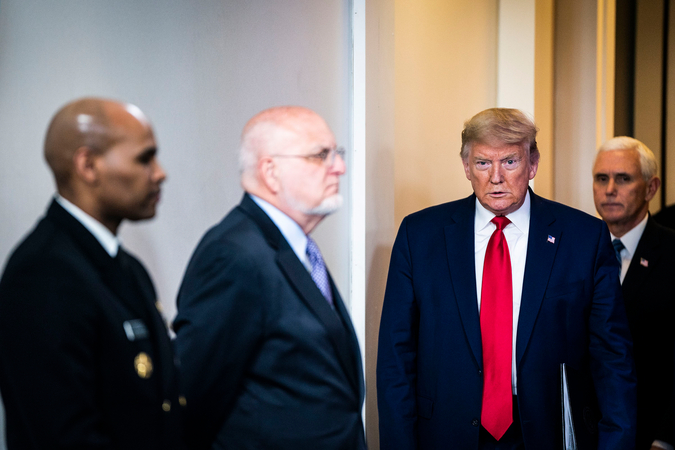 President Trump arrives to speak with members of the coronavirus task force during a briefing at the White House on Friday. MUST CREDIT: Washington Post photo by Jabin Botsford

President Donald Trump promised federal support Friday for oil companies battered by the novel coronavirus pandemic, which has depressed America's demand for oil at the same time Saudi Arabia and Russia, whose authoritarian leaders Trump has courted, have waged a price war that has sent worldwide prices plunging.

Trump said he assured oil firms that the federal government will make room in its Strategic Petroleum Reserve so that American producers can store oil that would fetch a better price in the future.

The Energy Department said Thursday that it will try to make 30 million barrels of the reserve's oil storage capacity available to U.S. oil producers that face the challenge of storing petroleum few are now willing to buy.

The pandemic "knocked the hell out of the market," Trump said at a White House briefing on the coronavirus Friday.

He met with U.S. oil executives, U.S. officials and Republican lawmakers from oil-producing states earlier Friday. The session at the White House came at a critical time for the industry, which has been struggling with the lowest prices, adjusted for inflation, seen since before the Arab oil boycott of 1974.

"There's a tremendous abundance of oil, primarily because of the virus," Trump said. "The virus has just stopped demand of everything, including oil. So we're working with our great energy companies. These great companies employ tens of thousands, hundreds of thousands of people."

The oil companies have been hammered by dual forces: a collapse of demand as the world spins into a deep recession or depression related to the pandemic and the tit-for-tat price war between Saudi Arabia and Russia over who should be responsible for cutting production to help balance the markets.

The Energy Department does not have the authorization to buy the oil it has offered to store, but said it was making the space available to private companies. It said it plans to take an additional 47 million barrels at a later date.

Trump's praise for oil firms as they seek ways to raise global prices was the latest twist in a head-spinning presidential reversal. Trump had pressed for lower oil prices for years, and is now trying to leverage increases. As recently as last month Trump had cast the plunge in oil prices as good news for American motorists, even as Americans were told to stay home.

By Thursday, Trump tweeted that he had interceded with Saudi Crown Prince Mohammed bin Salman. He had spoken earlier in the week with Russian President Vladimir Putin.

"Just spoke to my friend MBS (Crown Prince) of Saudi Arabia, who spoke with President Putin of Russia, & I expect & hope that they will be cutting back approximately 10 Million Barrels, and maybe substantially more which, if it happens, will be GREAT for the oil & gas industry!" Trump wrote.

He added, "Could be as high as 15 Million Barrels. Good (GREAT) news for everyone!"

The Saudis and Russians have yet to acknowledge a deal, though Saudi Arabia on Friday called on OPEC nations as well as Russia and the other members of the group called OPEC+ to take part in a video conference Monday to discuss production cuts.

That could herald the end of the price war that the two countries have been waging for the past month, as they promised to increase their outputs by several million barrels a day.

"Ultimately the market is going to get them to stop," Trump said Friday.

The Russians said Friday that they will take part. Energy Minister Alexander Novak met with Putin and they agreed that cuts of 10 million barrels a day are in order, the Kremlin said.

Novak said that the world's leading oil-producing nations should all participate in reaching that goal.

"It's important that all major producers take part in our joint efforts, including Russia, Saudi Arabia, the U.S.A. and other countries both in and out of OPEC," he said.

American shale producers, who have higher costs, have taken the biggest hit from the skid - bigger than either the Saudis or the Russians have suffered. Production costs in Russia and Saudi Arabia are much lower than the cost of drilling shale in the United States.

But rather than celebrate low oil prices and the benefits for consumers, the administration is trying to figure out a way to prop up prices and stabilize the market. One beneficiary would be big independent producers of shale oil, who have given the president much support.

Since the 1970s, the Organization of the Petroleum Exporting Countries, led by Saudi Arabia, has played an important role in setting prices. And the United States became a huge net importer of oil, which meant its balance of trade and consumers suffered during periods of high prices.

But the recent development of shale oil has made the United States a small exporter, and strengthened the political hand of so-called independent oil companies that concentrate on exploration and production. Among the biggest are Devon Energy, Pioneer Resources and Continental Resources, founded by Trump's friend and sometime adviser Harold Hamm, who attended Friday's meeting.

Hamm has suggested that the administration file anti-dumping charges against Saudi Arabia, though Saudi production is so low it would be hard to prove that it was selling in the United States below cost.

With reporters in the room at Friday's meeting, Hamm thanked Trump for his efforts with Saudi Arabia and Russia.

"Really appreciate your leadership, also the friendship that you've kept with the Saudis - the Saudi crown minister, or crown prince, and also Vladimir Putin. I know those haven't been easy sometimes, but at this time, it was particularly needed," he said.

Trump said that both leaders "want something to happen badly. Certainly terrible for them, what's happening, too. So they want to see something happen."

The Texas Railroad Commission, which was the cartel of its day until the United States became a net importer around 1970, has been talking about whether it should once again order companies in Texas to shut in wells and cut off production in an effort to balance the market. Texas, thanks to a boom in shale oil drilling, has become a bigger oil producer than Iraq. And the players there include the big independents as well as big multinational integrated companies such as Exxon Mobil, Chevron and Occidental Petroleum.

"Formerly a leading OPEC foe, President Trump is now pushing hard for Saudi Arabia and Russia to return to managing the market by organizing a collective supply cut by 10 million barrels a day or more," said Robert McNally, president of Rapidan Energy Group and former member of the National Security Council under President George W. Bush. "And Texas regulators are considering dusting off legal authorities unused for 48 years to impose quotas in the hope doing so will also spur Russia and Saudi Arabia to call a halt to this frightful experiment with totally free-market oil prices."

Texas would agree to production curbs if Trump can negotiate cutbacks overseas, one of those regulators said Friday.

"If U.S. cutting would help get that deal done, then yes, I think Texas would be supportive of that," Texas Railroad Commission member Ryan Sitton said on CNBC.

Sitton, one of three members of the Texas Railroad Commission, which regulates oil and gas production in the state, said any production cuts would be temporary. There is no need for a long-term deal, he said.

Any deal would require support from two of the three commissioners.

For consumers, the price war is about the only piece of good economic news. The Energy Information Administration said that last week the price of gasoline averaged $2 a gallon. This week it has fallen further. One motorist emailed a photo of a New Orleans station selling gasoline for just 87 cents a gallon.

The independent companies have relied heavily on oil prices of as little as $30 and as much as $50.

Now with oil prices hovering just above $20 a barrel, companies' finances are under stress.

This week, Whiting Petroleum, one of the most active shale oil and gas drillers in the United States, declared bankruptcy, and analysts feared that it was just the first domino to fall. Just under six years ago its stock traded at more than $350 a share; its shares on Friday were trading at just under 50 cents. The company's annual report says that Whiting had interests in more than 5,000 wells and had debts of more than $2.7 billion at the end of 2019.