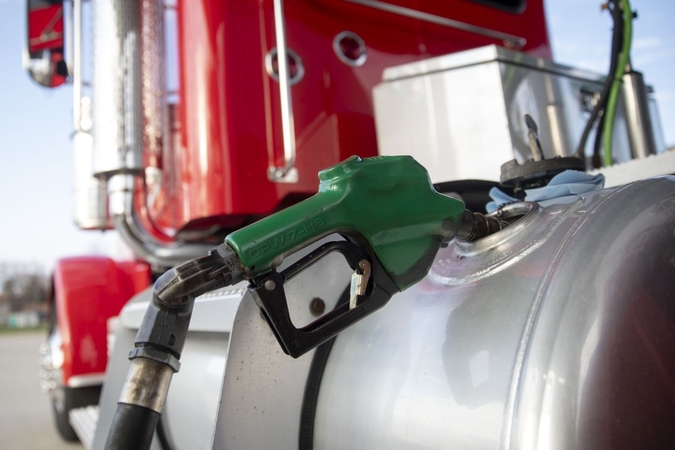 A nozzle pumps fuel into the gas tank of a tractor trailer at a Phillips 66 gas station in Princeton, Ill, on April 1, 2020. MUST CREDIT: Bloomberg photo by Daniel Acker.

U.S. gasoline demand has collapsed as stay-at-home orders keep drivers off the road, following the pattern seen in the hardest-hit parts of Europe.

Sales at retail stations were down 46.6% from a year earlier in the week ending March 28, according to a report from OPIS by IHS Markit. The average station sold about 11,000 gallons -- less than two tanker trucks' worth.

The gasoline demand plunge accelerated as government orders on staying home became more widespread, dropping 30% in a week. The loss of consumption in the U.S. echoes that of Spain and Italy, which imposed some of Europe's harshest restrictions on movement. Demand there for gasoline was down about 85%.

Weekly U.S. government data show that the least gasoline was supplied to the market since 1994. While the drop isn't as drastic as at the retail level, it's likely to increase as retailers take less fuel. Refineries are cutting back production as fuel piles up in storage tanks, in turn pushing down crude prices. Globally, oil demand may shrink by as much as a third, according to some estimates.

The national figures line up with state-level numbers. Last week, a trade group in California reported a drop of 60% in combined gasoline and diesel sales in urban areas and 35% in farm markets from early March through March 27. Trade groups in Texas and Florida reported big-city gasoline sales down by half.

European countries are also taking a hit. Gasoline demand fell 83% on an annual basis in Spain during the week ended March 29, according to pipeline operator CLH Group. In the U.K., gasoline sales in late March were down by 66%, compared with an average during the previous two months, the U.K. Petrol Retailers Association said.

A survey of Dutch car dealers, driving schools and transport companies found that respondents lost almost half of their revenue on average as a result of the virus, according to industry group Bovag, which conducted the study.

"The Netherlands really has come to a standstill," said Bovag spokesman Tom Huyskens. "Only those that really need it are driving, filling up their tank, but otherwise traffic has pretty much stopped."

In the U.S., diesel demand hasn't been hit as bad, as truck deliveries have continued. But Pilot Co., America's biggest truck-stop company, is facing a 25% to 30% slowdown as the impact of coronavirus moves through the supply chain, keeping economic activity muted and workers at home, Chief Executive Officer Jimmy Haslam said in an interview.

"With big box retailers starting to slow and automakers shutting, we expect more slowdown in coming weeks," he said.

Alex Baloga, president of the Pennsylvania Food Merchants Association, said his state's figures were roughly in line with drops in the larger states, but there were glimmers of hope.

Members with fuel pumps at stores have reported increased traffic in the last few days to numbers not seen since late February. Stores are still looking for creative ways to make money.

"There are not a lot of good options out there," he said. "One of the things we are looking at is the return of video poker machines to the stores, with responsible social distancing, and allowing liquor sales at the stores. We want to start having that discussion."