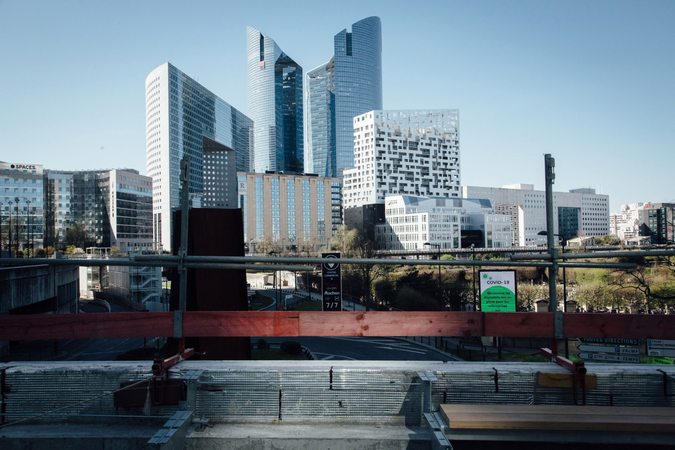 The business district in Paris in March 2020. MUST CREDIT: Bloomberg photo by Cyril Marcilhacy

Chinese firms are getting ready for discount deals in Europe, where the coronavirus pandemic has sent companies scrambling for cash to stay in business.

Bankers have recently seen a spike in requests from Chinese firms and funds for proposals on targets in Europe, said people with knowledge of the plans, who asked not to be identified because the discussions are private. Many of the potential acquirers are state-owned enterprises, they said. These preliminary talks come as listed company valuations have tumbled along with the MSCI Europe Index, which tracks the continent's developed market performance. The index slumped 23% this year in the worst rout since the global financial crisis of 2008-09.

Deals led by Chinese firms, particularly those owned or backed by the state, risk setting up clashes with European governments, who have signaled their willingness to defend strategic sectors.

In Europe, industries from airlines and hoteliers to soccer leagues are seeking funding aid as the business halt brought by the pandemic leads to cash-flow issues. In anticipation of potential hostile suitors, including Chinese firms, some of the corporates in Europe are dusting off their defense strategy, the people said. Bankers have been asked to help in defending against potential takeovers, they said.

While the pandemic and global travel restrictions mean deals might not be sealed anytime soon, Chinese suitors are keen to explore as they see less competition from foreign counterparts who are busy handling the outbreak, the people said.

Any sizable overseas deal would signal a comeback of China Inc. to the global stage after Beijing cracked down on what it termed "irrational" international expansion by some privately-owned corporates such as HNA Group. Chinese outbound deals plunged to $11.3 billion in the first quarter, the worst since the first three months of 2013, according to data compiled by Bloomberg.

State-owned enterprises often hunt for acquisitions in industries seen as a national strategic priority for China, such as automobiles, energy, infrastructure and technology. CNIC, a state-backed investment fund, is considering buying about a 10% stake in Greenko Group, one of India's largest renewable energy companies, Bloomberg News reported recently.

Private Chinese enterprises are also starting to hunt for targets. Fosun International last month said in a statement that the Chinese conglomerate will seek investment opportunities around the world as the "once-in-a-century" coronavirus pandemic sparks an asset-price downturn. Shanghai Yuyuan Tourist Mart Group, a Fosun unit listed in Shanghai, recently announced an acquisition of a 55.4% stake in French jewelry brand Djula for 210 million yuan ($30 million).

"It may still be early days, but we hope to see a gradual increase of activity in the second half of the year from Chinese companies trying to do deals both in the Asia Pacific region and abroad," Yang Wang, a Hong Kong-based partner at law firm Dechert LLP said in a phone interview. "Deal activity in industries such as consumer products, travel and hospitality should bounce back once things return to normal."

A banker fielding interest from Chinese buyers said the companies were looking at assets in regions perceived as China-friendly, including Southern Europe, South America, Africa and the Middle East.

However, Europe has been trying to limit foreign acquisitions of important technologies, so Chinese companies may seek to target less-sensitive areas such as industrial and manufacturing businesses.

The European Union has warned that the economic slump from the pandemic could leave the bloc's key industries vulnerable to hostile takeovers. Last month, the European Commission called on the member states to take all necessary measures to protect strategic assets and technology from foreign investments that could threaten public policy objectives.

In Italy, the country with the highest Covid-19 death toll in Europe, the government led by Prime Minister Giuseppe Conte announced measures Monday strengthening the so-called Golden Power protections against foreign takeovers. Curbs will now cover a wider range of sectors, including banks, insurers, energy and health care, and will be applicable to European Union companies looking to take stakes just over 10%.

Spain has imposed new rules on foreign direct investment. The government said on March 17 that investors outside the European Union will require a new authorization from the government if they wish to control or increase their participation to more than 10% in a local company, be it public or private, in a strategic sector.

Aena SME, Endesa and other private companies in the telecom, energy, defense and technology sectors, which could become potential takeover targets after losing significant stock value, obtained temporary protection from the Spanish government that could last until the end of the year, wrote Bloomberg Intelligence analyst Aitor Ortiz in a March 20 report.

German Chancellor Angela Merkel's government plans to bring in new rules that enable the authority to block deals that present "potential interference" to the country's interests, protecting local companies from takeovers by entities based outside the European Union, according to an official who spoke on the condition of anonymity.

It's likely that 10% to 20% of the Chinese outbound deals being discussed will come to fruition given the heightened scrutiny, one of the people said.