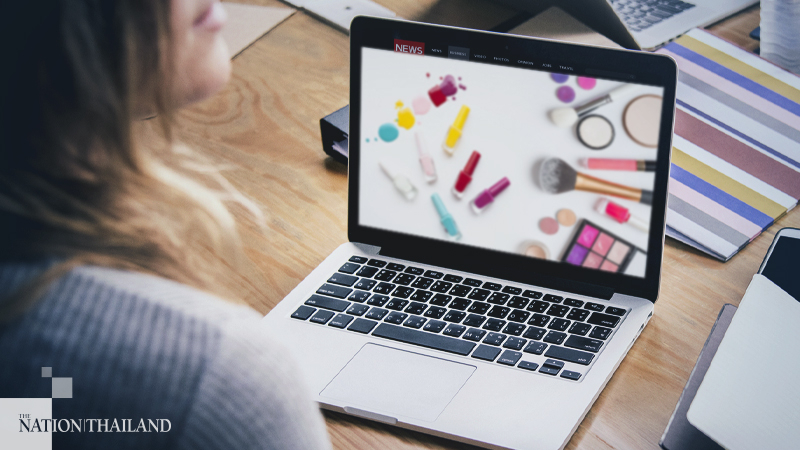 Stuck inside with nowhere to go, Chloe Smith still makes sure she has her hair and nails done. The 17-year-old high school student has swapped her regular salon appointments with an at-home DIY beauty parlor, complete with a nail kit, UV light for gel manicures, and a box of home relaxer.

She may not have to head to class - her Chicago-area school is closed at least through the month - but she's still posting to TikTok. "I won't record if I look a mess," Smith said, laughing.

For many Americans, city-wide lockdowns and stay-at-home orders have meant embracing loungewear. Online apparel sales have cratered, as economic insecurity has people reconsidering how they spend their money. Why invest in a new outfit if there's nowhere to show it off?

The beauty market, however, hasn't taken the same hit. Sales for nail grooming products like cotton balls jumped 58% last week, compared to the week before, according to data from Nielsen. Nail polish remover purchases also increased more than 50% during that same time period. Sales for hair coloring products rose 19%.

For some, makeup and hair regimens are a way to pass the time. For others, self-maintenance is a soothing break from the relentless news cycle. Then there are the people taking things into their own hands out of necessity. With salons closed for the foreseeable future, many have no choice but to figure out how to cut their own bangs, remove overgrown gel nail lacquer, or attend to unruly brows.

"We are doing it for self-care," said Stephanie Smith, who stocked up on supplies with her daughter Chloe in the past few weeks. Instead of dwelling on things that are outside of her control, she does her hair. "Even if it doesn't come out the way you want it to, you can put something into it to make yourself feel beautiful, even when there are ugly things going on around you."

Eva Visani, a 90-year-old grandmother in Michigan, on the other hand, spent two hours clipping her own toenails last week. She usually gets a pedicure at the salon because it hurts her back to do it herself. She didn't put on polish, she wrote in an email because "I was very tired."

For black women, there's an additional calculus. Braids, sew-ins, and other protective treatments that minimize heat on natural hair usually require salon expertise. The styles last several weeks, but lockdowns are expected to last longer. Tyra Staples, a 45-year-old stylist in Chicago already has clients worrying about upkeep. She recommends wearing a bonnet to help keep hair moisturized. "You can just pull it off before your video conference," Staples said. Online braiding classes have also popped up to help black women maintain healthy hair.

The $85 billion beauty and personal care market in the U.S. is fueled by women regularly going to salons for manicures and pedicures, eyebrow threading, waxing and hair coloring and men heading to their barbers' chairs every few weeks. That came to a sudden halt in March as governors across the U.S. shut down non-essential businesses to help stem the spread of the virus and told residents to stay inside their homes as much as possible.

Unlike other industries that have seen even e-commerce sales disappear, beauty consumption has partly shifted online or to drug stores, which are still considered essential businesses. Since closing their stores nationwide, Ulta's seen a "significant uptick in e-commerce" this month, Chief Executive Mary Dillon said during a Thursday conference call. The increased demand has been substantial enough that distribution centers are running in "holiday mode."

"The beauty enthusiast has an emotional, deep connection with beauty despite the economic environment," Dillon said. "We don't see that changing."

But with unemployment expected to rise to 15% in the coming weeks, the personal care market may ultimately take a hit. A March survey by Morning Consult found that 48% of respondents would spend less on beauty products if someone in their family lost their jobs. Another Morning Consult poll found that 15% of those asked said they'd expect to spend less on beauty products because of the pandemic, regardless of whether they foresee an employment change.

For some, at-home care can't replicate the salon experience. Samantha Mendoza, a 23-year-old who lives outside Los Angeles, has her own equipment for manicures, facials, and an eyelash kit. Still, she prefers going to the salon once a month. "For me, it's more about the experience, not just the final outcome," she said. "That's what I miss the most."

Personal care businesses are banking on people like Mendoza to come back once quarantines end. European Wax Center offered customers extensions on their service packages. Hairstylists are advertising deals to clients on Instagram alongside photos of their work. Lisa Logan, owner of The Nail Suite in Harlem, said she's already thinking about the additional staff she'll need to handle demand. "The floodgates will definitely open," she said.

Chloe Smith may have mastered at-home care, but she's looking forward to letting the pros take over. "I'm still willing to go to my nail tech for her to do my nails," she said. "But if she's unavailable, then I know how to do them now."