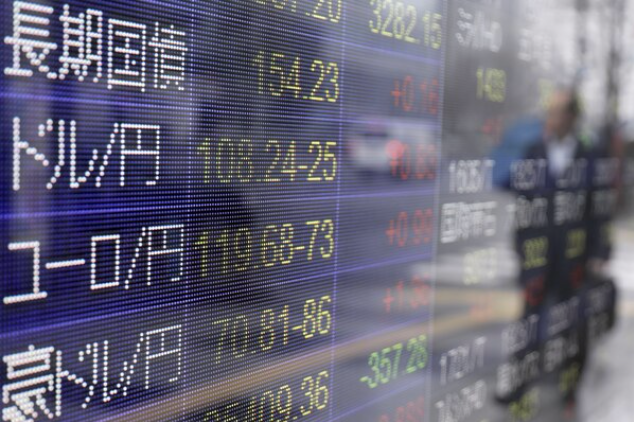 The foreign currency exchange rates of the yen and other indexes are displayed outside a securities firm in Tokyo, on March 2, 2020. MUST CREDIT: Bloomberg photo by Kiyoshi Ota.

The coronavirus pandemic is fueling a boom in retail currency trading, with some discovering that working from home means they can moonlight in the market during the daytime.

Virus-related shutdowns have reshaped the way that millions around the world make a living and have also provided impetus for all sorts of at-home activities from binge-watching programs on Netflix to learning new skills. At the crossroads of that is retail wagering on currency markets, especially in Japan.

Trading volume in margin accounts held by individuals in the nation more than doubled last month to $9.4 trillion, just as volatility in the dollar-yen exchange rate spiked and Japan began to get more serious about social distancing.

Japan boasts the world's most powerful force of retail forex traders, with almost 1 million margin accounts, and the recent change in their behavior is significant for global markets. Until now, most of them had been active at night, during European and U.S. trading hours, and their go-to trade was selling the yen to buy high-yielding currencies, often in emerging markets.

One 14-year veteran of Japan's retail trading scene said that he'd intensified his trading activities since he started to work from home in late February.

"I've been looking at charts more often and trading more frequently during the daytime," said the 40-year-old from Osaka, who is a salesperson for a large information-technology company and asked to be identified only by the given name Ryoma. "The frequency of my intraday trading has increased significantly."

Trading volume in individual forex margin accounts leaped to 1,015.6 trillion yen ($9.4 trillion) in March from 403.1 trillion yen in February, according to the Financial Futures Association of Japan.

Contrary to popular tales of Japanese housewives as the driving force in this part of the market, most of these account holders are middle-age men, who until now typically traded after they clocked off from work.

In China, legions of retail investors have also been active during the lockdown, playing a prominent role in their nation's domestic stock markets.

There was also a remarkable increase of trading of the yen against the dollar last month, which almost tripled to 721.4 trillion yen to account for more than 70% of total turnover, data from the Japanese futures association show.

"Currencies fluctuated quite sharply in March and that became news in Japan, drawing a lot of attention," said Toshiya Yamauchi, chief manager for foreign-exchange margin trading at Ueda Harlow in Tokyo. "Interest in FX trading tends to rise when the yen appreciates, as retail traders try to take positions in cheaper foreign currencies while selling the yen."

Volatility in dollar-yen touched the highest in more than 10 years last month as the Japanese currency rallied to levels last seen in 2016, only to give up its gains just as quickly. The pair was down around 0.1% on the day at around 107.61 as of 11 a.m. Thursday in New York.

While prices have shown signs of stabilizing in April, new entrants are still pouring into the market.

"There is an increasing number of investors opening accounts as the bigger swings in dollar-yen has drawn a lot of interest." said Takuya Kanda, general manager at Gaitame.Com Research Institute Ltd., an arm of one of Japan's major forex platforms.

Kanda said he was also witnessing more trading during the Tokyo session, rather than during London and New York hours, which was the case before.

The attention on the greenback and the yen may be luring retail traders away from high-yielding emerging-market currencies such as the Turkish lira, said Masakazu Satou, an adviser at Gaitame Online Co.

"I could have chosen to stay out of the market because huge price swings increase risks," said Ryoma, the retail trader from Osaka. "But from what I learned during the Lehman crisis, I was able to trade many times in small lots during the heavy volatility."