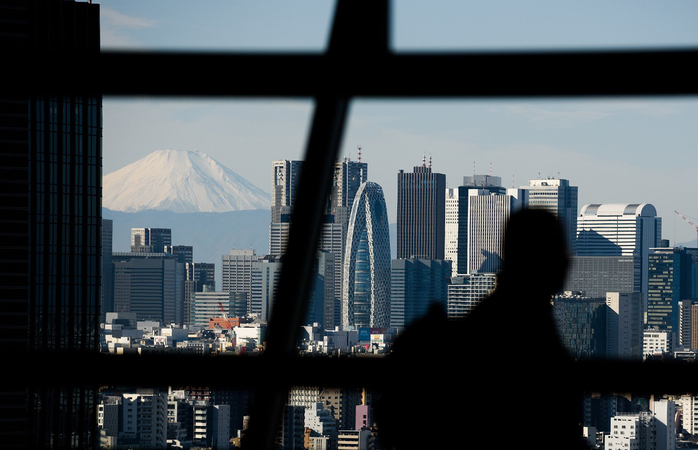 Mount Fuji stands beyond buildings as a visitor looks out at the Tokyo skyline from an observation deck on Jan. 11, 2019. MUST CREDIT: Bloomberg photo by Akio Kon.

Japan's long-suffering regional banks face the biggest threat to their survival since the 1990s post-bubble malaise as the coronavirus hammers their few remaining profit drivers.

Analysts and investors are predicting some local lenders will eventually be delisted or bailed out by the government as bad loans climb and investment income evaporates in the wake of the crisis.

"I am more concerned than ever for the outlook of many regional banks," said Shannon McConaghy, London-based portfolio manager at Horseman Capital Management Ltd., which manages about $327 million. "I fully expect some regional banks will become unviable and will be quasi-nationalized" by the deposit insurance fund, he said.

Loan margins are poised to shrink from historical lows and banks are being urged to relax terms for smaller businesses as the government tries to cushion Japan's worst recession in years with a flood of cheap funding. That won't stave off a potential surge in bad loans, said McConaghy, who declined to comment on his investment position but has made bearish calls on regional banks in the past.

The Bank of Japan this week identified rising credit costs and losses on securities investment as key risks to the financial system should the economic and market turmoil persist. Both areas have been crucial to propping up earnings at Japan's regional banks through years of rock-bottom interest rates and a stagnating rural economy.

"If bad loans sharply increase, I expect the cases of public money injections into banks will rise," with the rescues potentially triggering industry consolidation, said Yoshinobu Yamada, a senior adviser at PwC Advisory. "There is a concern that the number of loss-making banks will increase."

A quarter of Japan's 105 local banks have been losing money in their core lending and fee businesses for at least five years running, Financial Services Agency figures to March 2019 show.

Banks worldwide are contending with the prospect of loans souring as the deadly virus causes businesses to shut down. The five biggest U.S. banks set aside roughly $25 billion to cover future losses from defaulted loans, earnings reports showed this month.

"We need to look at how the impact of the coronavirus will spread to regional financial institutions" and act quickly if needed to ensure stability, Finance Minister Taro Aso said Wednesday.

To be sure, bad loans at Japanese regional banks are nowhere near the levels after the bursting of the bubble economy in the 1990s. But according to Moody's Investors Service, they are vulnerable to "even marginal deterioration of asset quality" because of weak loss buffers and profitability.

Japanese authorities have been encouraging consolidation within the industry for years, with limited success. Now they are beginning to shift their focus away from shoring up banks' profitability to ensuring they support companies in their regions, said Shigeto Nagai, head of Japan economics at Oxford Economics.

"In coming years, the authorities will likely examine ways to delist weak-performing banks and convert them to some kind of cooperative financial institutions," Nagai wrote in a report this month. "This will release them from stockholders' dividend pressures."

The Topix Banks Index has declined 27% this year, more than the benchmark Topix's 17% drop. The gauge of 82 lenders -- including Japan's three so-called megabanks as well as regionals -- is trading at 0.32 times the book value of their assets, compared with 0.77 among U.S. peers on the KBW Bank Index.

Regional lenders are also navigating the impact of rocky financial markets on their 80 trillion yen ($743 billion) investment portfolios that have over the years shifted away from low-yielding Japanese government bonds. Apart from U.S. Treasuries, they also hold more risky equities, high-yield bonds and even packaged corporate debt known as collateralized loan obligations, which are all now showing signs of stress.

Local lenders' holdings of investment trusts -- including assets ranging from bonds and stocks to real estate -- could incur large losses if the global market turmoil persists, the Bank of Japan said.

Choosing where to invest is getting trickier. With bond yields sliding worldwide, local banks can either wade deeper into riskier assets, or retreat and accept diminishing returns. The prospect of trillions of yen in government bonds maturing at home in coming years is compounding their headache.

"There isn't any area in the world where I think some of these regional banks can generate the required yield without taking undue risk as deposit-taking institutions," said McConaghy.

In a Bloomberg survey taken last month, regional banks signaled plans to diversify their investments, with a tilt toward domestic assets. Asked what they would do with cash from redeemed JGBs, 19 of 21 respondents said they plan to invest in Japanese stocks and corporate bonds. But only seven said they would do so exclusively, with the others all keen to dabble in assets ranging from foreign government and corporate bonds to alternatives.

In the short run, lenders will be able to sell some of their Treasuries at a profit, given the recent rally that saw 10-year yields plunge to as low as 0.3%. But the drop in rates means they won't be able to rely on interest income from the securities in the future, said Rie Nishihara, an analyst at JPMorgan Chase. "They can't be happy with short-term gains," she said.

Former FSA Commissioner Hirofumi Gomi said banks realize that they need to move beyond traditional lending, but many lack the expertise to effectively manage their portfolios. More than half of the Bloomberg survey respondents said they have no more than five people in their investment teams.

"I suspect there are regional lenders whose management don't have a full grasp of what they're buying," said Gomi, who headed the regulator from 2004 to 2007 and is now a senior adviser at Boston Consulting Group. "Good management knows they can't survive just by lending."