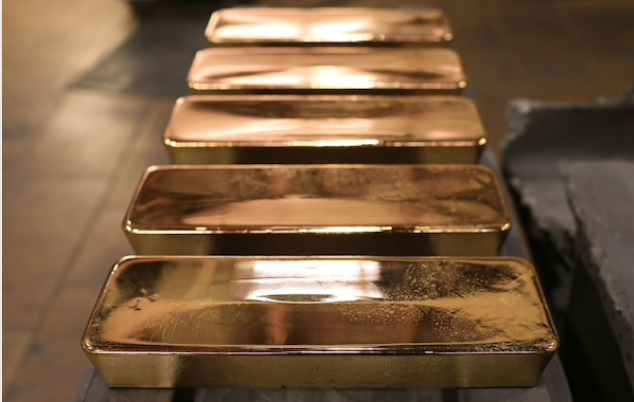 Australia's largest gold refinery has ramped up production of one kilogram bars to ease the supply squeeze in the U.S. that helped propel a surge in the premium for New York futures.

"We're producing as many kilobars as we can, we're probably churning out 7 1/2 tons of them a week at the moment and we are forward-sold well into May," Richard Hayes, CEO of the Perth Mint, said in an interview. "A very large portion of those kilobars are ending up as Comex deliveries."

In a chaotic couple of days in late March, the premium for New York futures over the London spot price rose above $70 -- the highest in four decades. The spread has narrowed to about $21, yet that still compares with just a few dollars in normal times.

The mint, which reopened a kilobar production line in response to the supply crunch, expects elevated demand to prove to be only a short-term issue.

"Arbitrage issues around the Comex will be short lived and I don't see them lasting for months and months," Hayes said. "This is an unusual situation where you've got plenty of physical metal, it's just in the wrong form and in the wrong place."

A separate outcome of the coronavirus pandemic has been an acceleration of the refinery's work to source additional raw material from beyond traditional suppliers in Australia and neighboring nations including Papua New Guinea.

The Perth Mint has struck new contracts with some North American gold producers and operations in West Africa in the past 12 months to process their mined material, known as dore. Since supply chains have been disrupted by the virus, more global mining companies have been seeking pacts with the refiner, according to Hayes.

"We've certainly won some additional volumes out of Africa, and we've got another three or four contracts that are in the final stages of negotiation now," he said.

The facility is also continuing to see strong retail demand for precious metals products in the U.S. and Europe, prompted by investor concern over the potential economic impact of the current crisis, according to Hayes.

"For every coin we make, be it gold or silver, we could probably sell five or six of them," he said. "That strong demand will be a little longer-lasting, I expect, as people have been quite badly frightened by this whole covid disaster."