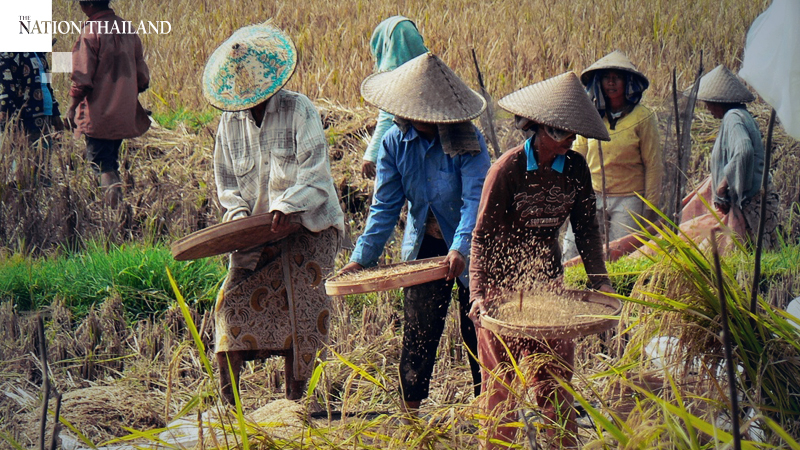 The owner of one of Vietnam's biggest rice exporters, Nguyen Quang Hoa, can only watch as 500 containers of sticky rice stranded in a port container yard for a month slowly degrades.

He's furloughed 400 factory workers, but his losses keep growing. If he doesn't ship the 12,500 tons of rice soon, he's worried his Chinese clients will reject it, and his company will be forced to default on $13 million in bank loans.

"We may have to throw away all the sticky rice, and spend more money getting rid of it," said Hoa, director and founder of Duong Vu Co. "My company is teetering on the edge of collapse."

Hoa is one of more than 100 traders in Vietnam hurt by a government measure last month to restrict shipments on concerns that global demand will spike as the coronavirus upends supply chains. While the world's third-biggest rice exporter has since reopened some trade, hundreds of thousands of tons of spoiling rice at the country's ports show the dangers of curbing exports.

In an effort to ease some of the bottlenecks at ports, the customs department on Thursday said it is resuming exports of glutinous rice. The shipments will not be part of this month's rice export quota, according to a statement on its website. There would be no limits placed on the April shipments of sticky rice, the trade ministry said on its website.

Less than three weeks after suspending overseas shipments on March 24, the Vietnamese government said it would allow 400,000 tons of exports in April. To do so, traders had to submit customs declarations, with registration opening at midnight on Saturday April 11.

Within three hours, the export quota was full, according to local news. Many were unable to register, and an estimated 300,000 tons are still stuck at ports, according to Pham Thai Binh, chief executive at exporter Trung An High-Tech Agriculture Co., who sits on the Vietnam Food Association's governing board.

The trade ministry, which oversees exports, was unavailable to comment.

If the rice isn't shipped, the companies involved will struggle to survive, the Vietnam Food Association said in a state newspaper. Even with the April quota deducted, there's still about 1.3 million tons of contracted undelivered rice, according to Bloomberg calculations.

Additionally, uncertainty over whether the government could restrict shipments again is holding back traders from signing new export deals. No new contracts have been signed, even after the export halt was lifted, according to the Vietnam Food Association's Binh.

"Over 100 rice exporters are in financial trouble as thousands of rice containers have been ensnared at ports," said Binh, whose firm was also unable to sign up for rice exports in April, and has more than 100 containers of rice trapped at ports since March 24.

In Can Tho, a city in Vietnam's rice belt, officials estimated that a majority of its rice exporters have been losing as much as $14,000 a day each on damages paid to shipping companies, container fees, and fines for being unable to fulfill export contracts, according to Tien Phong newspaper.

Vietnam's handling of the situation has drawn criticism, with the food association urging the government's customs department to stop opening the registration for customs declarations at midnight like it did this month. Many traders signed up to ship large amounts even though they didn't have enough volumes ready for exports, Vietnam News reported.

In response, Prime Minister Nguyen Xuan Phuc ordered an investigation into profiteering as well as whether there has been any wrongdoing in the state's management of rice exports. The government also directed the trade ministry to bring forward some of May's export quotas to this month, adding 100,000 tons for April shipments.

The Vietnam Food Association and rice firms on Wednesday urged the government to terminate the export quotas from May to facilitate traders' shipments and purchases from farmers, local news website BNews reported, citing a meeting held by the trade ministry.

The trade ministry has been ordered by the premier to submit its rice export plan for next month before April 25. It also proposed that the country ship 2.7 million tons of rice to help farmers, without specifying if the amount is meant for this year.

But concerns over the outlook for exports is only growing. National rice stockpiles, the very reason the export ban happened in the first place, have failed to grow to the state's target levels due to a spike in domestic prices, raising speculation the government could intervene again. Low-quality rice shipments, which account for about 1/5 of total shipments, may be halted until mid-June to help build inventories.

"We've stopped signing new contracts. How can we know if we are able to deliver?" said Nguyen Van Thanh, director of rice exporter Phuoc Thanh IV Co. "Vietnam is offering our export market to other rice producers, and we traders will have to restart from scratch after everything settles down."