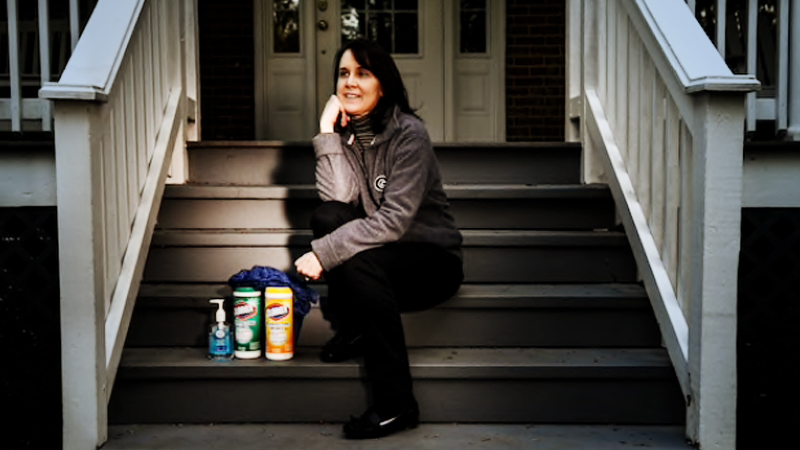 Plans for a swift reopening of malls, factories and other businesses accelerated Tuesday, but they quickly collided with the reality that persuading workers and consumers to overlook their coronavirus fears and resume their roles in powering the U.S. economy may prove difficult.

President Donald Trump on Tuesday evening issued an executive order that gives the federal government broad powers to ensure that meat and poultry processing plants remain open during the pandemic. The move, designed to avert widespread food shortages, came after the Conference Board reported that consumer confidence had plunged to its lowest mark in six years.

In the absence of a federal mandate, states are adopting varying approaches to the speed and pace of their commercial revivals. During a White House meeting with President Trump, Florida Gov. Ron DeSantis said he would make an announcement Wednesday on his state's reopening plans.

Businesses in Georgia - including massage parlors and barbershops - began welcoming customers on Friday for the first time since Gov. Brian Kemp issued a mandatory shelter-in-place order on April 2. And in Texas, Gov. Greg Abbott is allowing certain businesses - including retailers, restaurants and movie theaters - to reopen at the end of the week, but at only 25 percent capacity.

After several weeks of a comprehensive economic pause, companies, workers and consumers are returning to a changed landscape. The steady growth and low unemployment that Americans enjoyed just two months ago has vanished. Hanging over plans to restart the nation's economic engine are unprecedented health concerns, as individuals balance each shopping trip, airplane flight and restaurant meal against the risk of catching a sometimes-fatal illness.

"Consumers may have permission to go do something. But whether they go do it depends upon how badly they want to do it and how safe they feel," said William Dunkelberg, chief economist of the National Federation of Independent Business.

At the White House, President Trump sought to look beyond the deepening recession that economists say is pushing unemployment higher than any time since the Great Depression. He said that July, August and September would represent a "transition" to a stronger rebound in the weeks before and after the November election.

"I think [the] fourth quarter's going to be incredibly strong. I think next year is going to be an unbelievably strong year," the president told reporters.

His upbeat remarks came just hours before the Commerce Department was expected on Wednesday to report that the economy contracted at its fastest pace since the fourth quarter of 2008 when the global financial crisis was gathering steam.

"It is going to be the worst we've seen, probably," said Larry Kudlow, director of the National Economic Council, calling the current situation "temporary."

Sustained improvement now depends upon wooing workers and consumers to return to factories, restaurants and shops. There already are signs that may not be easy.

After 20 meatpacking plants closed in recent weeks following covid-19 outbreaks, the United Food and Commercial Workers Union complained about unsafe working conditions. A worker at a Smithfield Foods plant in Missouri sued the company in federal court for failing to take action to protect its employees, including altering operations to permit social distancing, providing protective gear and encouraging sick employees to stay home.

The New Braunfels, Texas, restaurant where Olivia Wise, 22, works as a waitress is planning to reopen Friday, when the state begins allowing some businesses to operate at 25 percent capacity. But the young woman, who lives with her parents, doesn't feel comfortable going back just yet.

"I personally think it's still too soon," she said. "It's awesome they want to get the economy going again, but it's not worth risking getting my parents sick."

Consumers also do not appear to be in any rush to leave home. While there have been scattered protests of lockdown orders in a handful of states, current limits on activity draw solid public support. In a new Washington Post poll, 66 percent of respondents -- including 62 percent of Republicans -- agreed that existing limits on restaurants, stores and businesses were "appropriate" while just 17 percent said they were too restrictive.

A key test of consumer willingness to brave health fears will come as soon as May 1 when Simon Property Group, the nation's largest mall owner, plans to reopen more than four dozen properties in 10 states, according to an internal memo obtained by CNBC.

In another sign of returning normalcy, Starbucks Chief Executive Kevin Johnson told investors Tuesday he expects to have about 90 percent of all company-owned stores open by early June.

The administration's hopes for a swift V-shaped recovery are clouded by the danger that a premature reopening might result in a new surge of infections that would require some states to order a second shutdown. Apart from testing public compliance, such an order could interrupt supply chains.

"This is what matters. The risk is you've got to shut down again," said Steven Blitz, chief U.S. economist for TS Lombard.

Washington is fighting the pandemic on all fronts. The Federal Reserve and Congress are devoting a combined $9 trillion worth of aid to saving the wounded economy, according to Kudlow.

Progress so far has been easier to detect in financial markets, which have rebounded from their late-March lows and sometimes disorderly trading, than in the lives of the average American.

A closely-watched index of consumer sentiment from the Conference Board Tuesday fell sharply to 86.9 in April from 118.8 in March. A separate measure of current conditions posted its sharpest fall ever, reflecting the massive rise in unemployment amid the pandemic-related shutdown, the group said.

Expectations for the next six months rose slightly, as consumers anticipated an end to mandatory business closures.

Millions of Americans have lost their jobs in recent weeks, forcing many families to rethink their spending habits. In Texas, Wise and her parents, who are also out of work, have spent the past six weeks whittling down their expenses by downgrading their cable plan, foregoing restaurant meals and doing without new clothes and shoes.

Two weeks after she got laid off from her waitress job in mid-March, her father was furloughed from the fracking company where he worked. Both are receiving unemployment checks, but Wise says they're not sure how long it'll be until they can both work again. In the meantime, household expenses pile up.

"We're stopped spending money, not only because of the quarantine but because, finance-wise, we can't afford it anymore," she said. "We're doing okay. We have food in the fridge but you just can't spend when you don't know when things are going to go back to normal."

Business owners say they also are facing a delicate balancing act, weighing the health of their employees against the need to make money. It wasn't clear, many said, whether customers would even show up once they reopened, but they couldn't risk not opening if all of their competitors were.

In Texas, Abbott's quarter-capacity mandate has left business owners scrambling to determine how, and when, to restart operations, according to Jason Mock, president of the San Marcos Area Chamber of Commerce, near Austin.

"Everybody is still wrapping their hands around it," he said. "There's still hesitation among some businesses but others are excited to get back in the game because they've been sidelined for so long."

Some restaurant owners, he said, are wondering whether they can make ends meet with only one-quarter of their seats open to the public. Reopening this week means having to pay for food, utilities and employee wages, with little guarantee that diners will immediately venture back.

"It's tough," Mock said. "I think it's probably going to be a slow trickle at first. But owners understand that this is just the first step on the way to how things used to be."

At the Luggage Store of Lubbock, Texas, which will reopen on Friday, owner Tiffany Zarfas Williams says she is encouraging shoppers to opt for curbside pickup. If they want to shop in person, they can schedule a visit online to ensure that the store never gets too crowded. She's also stocked up on disposable masks and hand sanitizer for employees as well as shoppers.

"I am a little nervous," Williams said. "I hate being in the state that's one of the first to reopen - we won't know until two, three weeks from now whether this was a good idea."

Sales have fallen 90 percent in the past month. Williams has continued to pay her two full-time employees and managed to defer her store's rent for two months. But she says she's bracing for a long-term drop in business. It could be months, perhaps years, she says before consumers feel comfortable spending hundreds of dollars on luggage.

"Even once we open, I don't foresee people just rushing out of the door to shop," she said. "It's a challenging time for someone who owns a luggage and travel store. Those are two things nobody is thinking about right now, and I don't know when that's going to change. That's what makes this so difficult: All of the uncertainty."

In Columbia, South Carolina, Darius Johnson is preparing to reopen his music-themed smoothie shop on Monday after a month long closure that's cost him thousands of dollars in lost sales. Johnson, who has four employees, plans to introduce a mobile app so customers can order and pay with their phones. He's also stocking up on turmeric, ginger and lemon juice, in hopes that health-conscious consumers will be ready to shell out.

"It has been a really big challenge waking up each morning and knowing I'm not going to make a single dollar," said Johnson, 28, who opened the Groove Smoothie & Juice Bar in November. "Of course, ultimately you want to stay safe, but you also have to do what you can to keep the business going."