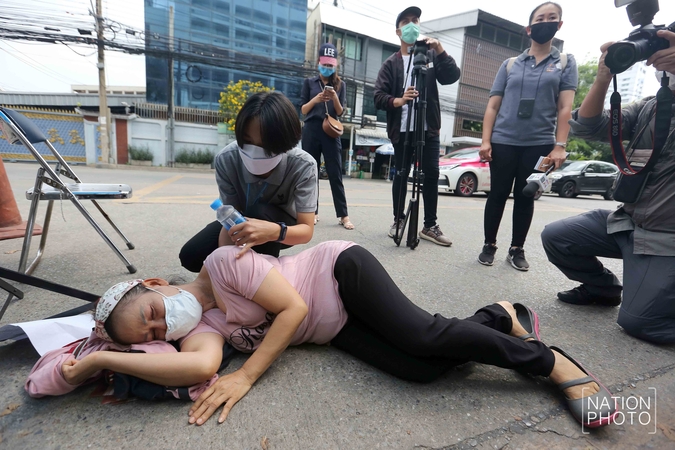 Street vendor Vilai Chanpeng, 54, protests in front of the Finance Ministry on April 28 after the Bangkok market where she works was closed and she was not granted the government’s Bt5,000 remedial cash handout.

Though Thailand will allow some businesses to reopen from Friday (May 1), the country is still not ready to welcome foreign tourists, say government officials. Tourists would find it difficult to enter the country anyway, since incoming flights are banned until the end of May, Dr Taweesin Visanuyothin, spokesman of the government's Centre for Covid-19 Situation Administration (CCSA), said on Wednesday (April 29).

He was responding to news reports that Chinese tourists have expressed a desire to visit Thailand next month. Last year the number of Chinese visitors rose 4.4 per cent to 10.99 million, out of a total 39.7 million tourist arrivals in Thailand, up 4.2 per cent.

Thailand will prioritise public health followed by economic matters, said Taweesin, adding that the CCSA will announce categories of businesses that can resume operations before Friday (May 1).

Disease prevention guidelines for both businesses and customers will also be announced in the few days, he said.

Social distancing and wearing of face masks would continue, he added.

“We want to keep new daily confirmed cases in single digits for as long as possible, till the spread of the virus outside Thailand starts falling,” he said.

The Kingdom’s daily total of new cases has fallen below 10 for three consecutive days. Monday was the first time the case count dropped into single digits at 9 – the lowest since the peak of 188 on March 22 –while Tuesday saw 7 new cases followed by 9 on Wednesday (April 29).

Taweesin also said Thailand should learn lessons from other countries which had eased lockdown restrictions too early and then experienced a second wave of contagion.

Meanwhile, Foreign Ministry deputy spokesman Natapanu Nopkun reminded foreigners stranded in Thailand that their visas will be automatically extended at no charge until July 31.

Economists project the Thai economy this year will be hit hard by the pandemic, with the Bank of Thailand forecasting a 5.3 per cent drop in GDP. Supavud Saicheua, adviser to Kiatnakin Financial Group, meanwhile predicts an economic contraction of much as 10 percent.