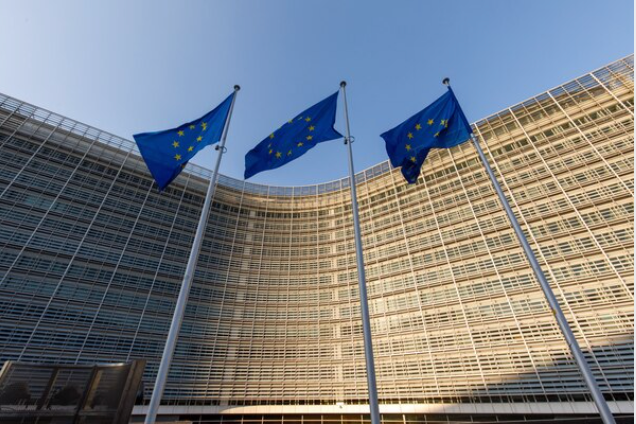 Flags of the European Union fly outside the Berlaymont building, which houses offices of the European Commission, in Brussels, Belgium, on March 26, 2020. MUST CREDIT: Bloomberg photo by Olivier Matthys.

Europe is circling the wagons. Thrust into a new era of big government by the coronavirus pandemic, European Union officials are scrambling to protect their most prized assets after the worst stock-market rout in nearly a decade left them vulnerable to takeovers.

Berlin, Paris, Rome and Madrid have all increased their powers to veto investment from outside the EU in recent weeks and the bloc is ushering in the first continent-wide rules for screening takeovers on security grounds. Special safeguards have been offered to biotech firms as the race for a vaccine against Covid-19 takes on critical importance.

In a world where economic collapse has added to the uncertainties stirred up by China's rise, America's retreat and Russia's muscle-flexing, the 27-nation EU is ditching its longstanding open-door policy amid signs that other global powers are looking to gain an advantage.

Chinese companies backed by the financial muscle of the communist state are already hunting for bargains in Europe. In 2018, Germany only learned belatedly about billionaire private investor Li Shufu's stealth operation to become Daimler's biggest shareholder. Officials in Berlin were also alarmed by reports in March of a U.S. government approach, denied by the White House, for a vaccine research firm.

"This is about the need to protect our critical infrastructure -- to be not too naive about what could happen with some vulnerable sectors and vulnerable technologies from third-country interventions," European Trade Commissioner Phil Hogan told EU lawmakers on April 21 in Brussels.

Until now, foreign investors have been mostly concerned with complying by the EU's competition rules, said Pascal Dupeyrat, who advises non-European investors in France. "For the next five to 10 years, such transactions will have to be acceptable under the much broader measure of national security," he said.

Still, what Europeans might call predatory behavior, others would consider fair game under the rules of modern capitalism. If anything, critics argue it underscores the creeping protectionism that has dogged Europe in the past years.

The EU must also tread carefully because of the importance of foreign direct investment, or FDI, to the European economy. FDI is directly responsible for around 16 million jobs in the EU and the bloc had attracted 7.2 trillion euros ($7.8 trillion) of foreign money by the end of 2018.

In that sense, Europe has been a barometer of the global economy. Worldwide, the ratio of FDI stocks to global gross domestic product increased almost sixfold to 40% in 2017 from 7% in 1990, according to the Organisation for Economic Cooperation and Development.

Despite the extra regulatory scrutiny, foreign investors' interest in European assets will remain strong as a result of the equity-market slump likely to last well into next year, said Davina Garrod, a London-based investment and competition adviser at law firm Akin Gump Strauss Hauer & Feld.

"The tide is turning in Europe with heightened vigilance, particularly regarding the Chinese and Russians," Garrod said. "But it's not turning Europe into a fortress."

In Germany, warnings about possible bids by foreign suitors have put the spotlight on industries ranging from machinery to software.

In early April , Chancellor Angela Merkel's government tightened protections to enable it to block acquisitions that present "potential interference" to critical infrastructure. On Tuesday the economy minister added an extra provision for all investments of 10% or more in healthcare companies. France and Italy have introduced similar rules for all strategic businesses this month and broadened the definition of key firms to include healthcare.

And then there is the U.K., which left the EU and has seemed intent on showing it will do things differently. But the mood in London has cooled toward China and the post-Brexit dream of a "Global Britain" is likely to come under pressure as the government sees famous brands being swiped up.

In Berlin, officials are on their guard.

"There are a number of other cases that we are monitoring very closely, in which we're determined to stop potential takeovers," he said.

Analysts suggest that the small- and medium-sized engineering firms that form the backbone of German industry could attract interest. They've highlighted companies like Jenoptik in the former communist east that specializes in precision lasers and optics and Deutz, the world's oldest engine company, which is now developing electric drivetrains.

With memories still fresh of Chinese investments in the likes of Greece's main seaport and of Portugal's biggest utility during the euro-area debt crisis, Germans were alarmed by the takeover of robot maker Kuka by China's Midea Group Co. in 2016.

A joint push in early 2017 by Germany, France and Italy led the EU as a whole to bolster its defenses and in 2018 the German government stopped a Chinese bid for the first time, vetoing the potential purchase of machine-tool manufacturer Leifeld Metal Spinning AG.

A new European law on screening foreign investments, due to take effect this October, aims to increase protection for "critical infrastructure," including in the health, energy, transport and financial industries, and "critical technologies" such as artificial intelligence, robotics and semiconductors. That legislation was driven largely by unease over Chinese acquisitions.

Without taking the ultimate power of approving deals away from individual EU governments, the law sets up a bloc-wide "cooperation mechanism" for foreign direct investments. While waiting for the legislation to take full effect on Oct. 11, the European Commission is warning against complacency.

"The mood has shifted significantly in Europe," said Joachim Pohl, an expert on foreign direct investment at the Paris-based OECD. "Security concerns have come to the fore."