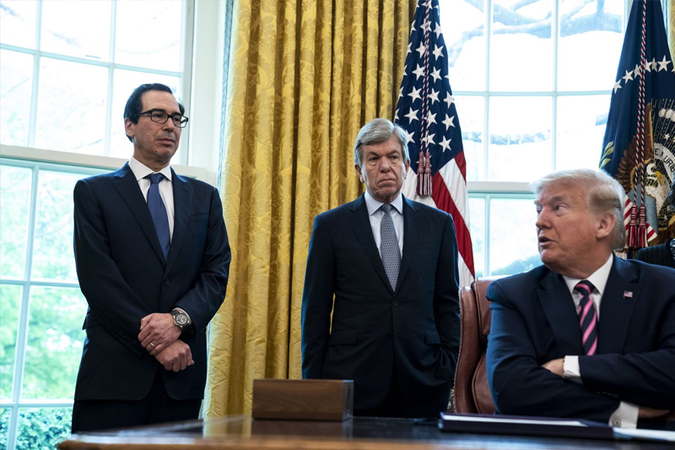 WASHINGTON - Publicly traded companies have received more than $1 billion in funds meant for small businesses from the federal government's economic stimulus package, according to data from securities filings compiled by The Washington Post.

Nearly 300 public companies have reported receiving money from the fund, called the Paycheck Protection Program, according to the data compiled by The Post. Recipients include 43 companies with more than 500 workers, the maximum typically allowed by the program. Several other recipients were prosperous enough to pay executives $2 million or more.

After the first pool of $349 billion ran dry, leaving more than 80% of applicants without funding, outrage over the millions of dollars that went to larger firms prompted some companies to return the money. As of Thursday, public companies had reported returning more than $125 million, according to a Post analysis of filings.

Other companies have said they plan to keep the funds, saying the loans had been awarded according to the program's rules and that they would use most of it to pay workers, as required, in order for the loans to be forgiven.

Treasury Secretary Steven Mnuchin has defended the program as a success, saying three-quarters of the loans were for totals of under $150,000. But after the first batch of loans was issued, the administration also scrambled to release new guidance for the program to discourage large public companies from applying.

Officials have urged publicly traded firms with access to other capital to return the money by May 7. Mnuchin said this week that all loans of more than $2 million would be audited with potential penalties for those who don't comply.

"I want to be very clear it's the borrowers who have criminal liability if they made this certification," of being a small business he said on CNBC.

The Small Business Administration has refused to release the names of companies that have received the loans, despite having released such information on its loan programs for years.

Some of the companies that received the loans were large in another way: Their CEOs have been making millions.

Veritone, a company based in Costa Mesa, California, that provides artificial intelligence technology, paid chief executive Chad Steelberg $18.7 million in total compensation in 2018, the last year for which data is available. His brother, Ryan Steelberg, the company's president, made $13.9 million. The company received $6.5 million in funding from the program. The company did not respond to a request for comment.

At least two other companies with highly paid CEOs have said they will return the money. Each changed its stance on the loans after the Treasury Department issued guidelines discouraging companies "with substantial market value and access to capital markets" from accepting the money.

Aquestive Therapeutics, a New Jersey pharmaceutical company, paid CEO Keith J. Kendall $2.6 million in 2019. That company received $4.8 million from the program but has said it will return it.

"As a small business, we were happy to qualify for a PPP loan, as it was originally written and intended, to continue to employ and provide health coverage to our 219 employees located around the country and provide important medicines to these patients during this period of crisis," the company said in a statement. "However, the new guidance issued on April 23 by the Federal Government appears to change the criteria for small businesses to qualify for the PPP loans."

Wave Life Sciences, a genetic medicine company, paid CEO Paul B. Bolno $5.8 million in total compensation in 2018. The company received $7.2 million from the program but has decided to return it, too.

"We made this decision after the SBA issued new guidance that states, in effect, that public companies are not appropriate recipients of these loans," the company said in a statement.

Chain restaurants and hotels were able to obtain tens of millions of dollars from the first pool of $349 billion in forgivable loans because Congress and the administration allowed multiple subsidiaries of large owners to each apply separately.

Those recipients include a group of hotel companies chaired by Monty Bennett, a Dallas executive and Republican donor, including Ashford Hospitality Trust and Braemar Hotels & Resorts. The companies used more than 100 filings to seek $126 million total and received $76 million.

On Friday, Senate Minority Leader Charles Schumer, D-N.Y., questioned how companies such as Ashford had received so much funding, writing to Jovita Carranzak, administrator of the Small Business Administration, to say that such companies "may be exploiting the Program to the detriment of small businesses around the country currently struggling to survive the COVID-19 pandemic."

Some chains that have returned funds have done so at the expense of their workers. AutoNation, the Fortune 500 network of auto dealers, said last week that it would return the $77 million it received. The same day of the announcement, employees there said AutoNation put some workers back on furlough and rescinded wage guarantee deals to commission-based employees.

Marc Cannon, AutoNation executive vice president, issued a statement to The Post saying the pandemic had reduced sales by half and stores had rehired employees based on commitments of the federal program.

"It is regrettable that we must continue to mitigate the financial impact of COVID-19," the company said. "Those employees who were being funded by PPP are being re-furloughed. There is no FORGIVABLE loan available anywhere to rehire 7,000 employees."

Lindblad Expeditions, an operator of high-end cruises, also returned its PPP funds. The company initially said it planned to keep the money because it qualified for the loan and planned to use it to retain employees. On an earnings conference call Friday, chief executive Sven-Olof Lindblad repeated that the company met the application requirements, but said it would return the $6.6 million loan.

"We wanted to protect our employees for as long as possible," he said, but added there had been "much negativity" around public companies that received the loans.

While much of the program's criticism has focused on the relatively large companies that received the money intended for small businesses, there is some evidence that the program missed its target in other ways, too.

Research by academics at the University of Chicago and MIT indicates that the areas where small businesses have been most affected - New York and New Jersey, for example - were less likely to see loans from the program. The authors defined "most affected" using small-business employment data, cases of covid-19, the disease caused by the novel coronavirus, and other factors.

"The loans were disproportionately allocated to areas least affected by the crisis," according to authors Joao Granja, Christos Makridis, Constantine Yannelis and Eric Zwick.