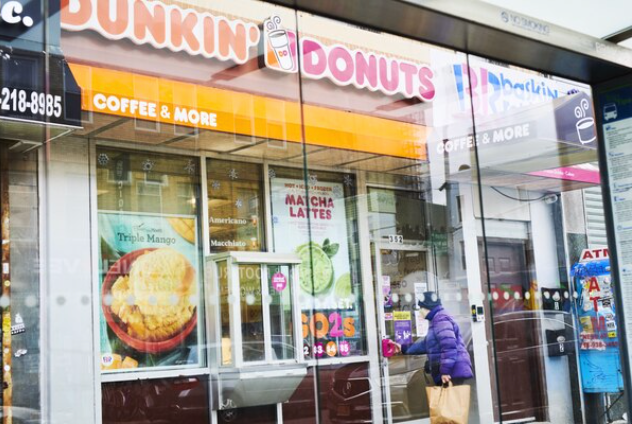 A customer wearing a protective mask enters a Dunkin' location in the New York borough of Brooklyn on April 27, 2020. MUST CREDIT: Bloomberg photo by Gabby Jones.

Restaurant managers are scrubbing tables, adding sanitizing stations and printing new menus as they get ready to open their doors. The one thing some of them are missing? People to make and serve the food.

More than 20 million Americans lost their jobs in April during the covid-19 crisis, but restaurants are still finding it hard to hire help.

Some former employees are making more money now thanks to an extra federal emergency payment of $600 weekly on top of state unemployment benefits. Others have found new jobs or are staying home with kids. Many are simply too nervous to interact with the public before the coronavirus outbreak subsides.

The labor challenges compound the financial hurdles for the restaurant industry, which, according to the National Restaurant Association, has lost about $80 billion in sales through the end of April due to the coronavirus shutdowns.

Companies eyeing a return to normal operations, including Dunkin' Brands Group Inc., Salsarita's Fresh Cantina and Shake Shack Inc., are grappling with how to staff their restaurants.

"Some stores are definitely having a challenge," said Scott Murphy, president of Dunkin's Americas region. Especially in hard-hit areas such as New York City, he said, the restaurants are "having trouble getting workers."

Tina Watson used to work every weekday at a Wendy's in Santee, South Carolina. But with broad stay-at-home mandates going into effect in March, her hours were cut back sharply, reducing her $500 biweekly paycheck to less than half.

She doesn't qualify for unemployment at the moment. Despite the financial strain, Watson, 41, is wary about working. Sometimes she can't go because she doesn't have anyone to watch her 11-year-old son, whose school is closed, leaving her restaurant short-staffed.

"I don't think I'm going to be able to go back to work knowing my son can't go to school and I don't have a reliable sitter," she said.

Of the job cuts announced from mid-March to late April, almost two-thirds have been in the entertainment and leisure sector including dining, according to consulting firm Challenger, Gray & Christmas.

U.S. government efforts to support people who have lost their jobs has had the unintended consequence of keeping some restaurant workers away. Under March's federal stimulus act, people eligible to get state unemployment assistance get an extra $600 a week funded by the federal government through the end of July.

This is why some restaurants are resorting to financial incentives to get workers back. Shake Shack, for instance, is offering an extra 10% in pay as a "thank you" to new hires, according to job postings in Texas and Seattle. Some Dunkin' franchisees are using bonuses and free meals to keep staff on the payroll, while the parent company weighs a new-hire ad campaign.

Not every company is having such a hard time finding workers. Papa John's International Inc. has brought on thousands in the last six weeks amid a broad hiring effort, which CEO Rob Lynch said is intended to get locations "appropriately staffed" to handle higher demand.

"I think people want to work now even more so than they did even four to five weeks ago," he said. "We've been hiring like crazy and we're going to continue to do so."

In fact, companies may need to hire even more workers than they had before the pandemic, to deal with extra cleaning measures, said Peter Saleh, a restaurant analyst at BTIG. "They're probably going to want to over-staff in this environment and be prepared."

These type of "labor inefficiencies" have been flagged by restaurants planning their reopening strategies. And refilling the same position can introduce new costs, particularly if restaurants have to hire inexperienced workers.

"If you can't bring back people you know, you have to go through training," said Salsarita's CEO Phil Friedman.

Salsarita's has had to delay reopenings in certain locations, including South Carolina, because it can't find enough people. Hourly staff particularly are reluctant to return because many have found new jobs or are nervous about working, and it could take weeks to fill out the ranks, Friedman said.