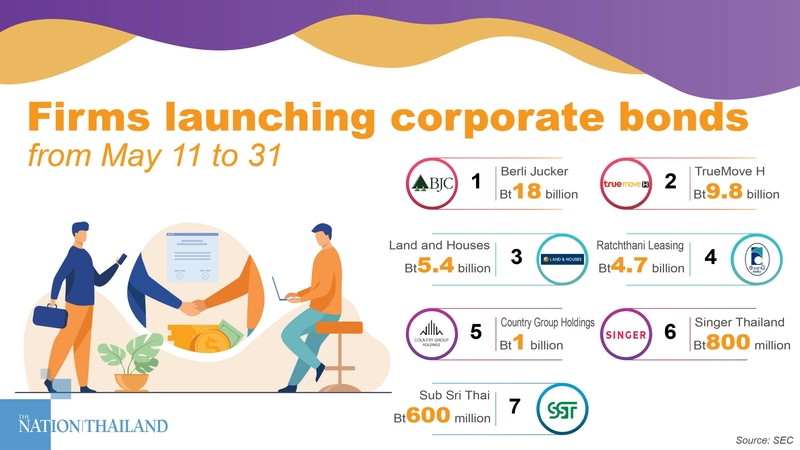 Though foreign investors have started returning to the Thai bonds market now that Covid-19 is subsiding, this capital inflow may renew the threat of baht appreciation, warn bond experts, as companies apply to issue corporate bonds with the Securities and Exchange Commission (SEC).

Analysts, meanwhile, also believe that the local stock market is on a rising trend.

Foreign investors had dumped both Thai government bonds and equities during the height of the outbreak last month, with the capital outflow sending the baht sharply down against the US dollar, sometimes hovering at around Bt33 to the greenback.

Though net purchase of Thai bonds by foreigners so far in May is only Bt1.2 billion, Tada Phutthitada, president of the Thai Bond Market Association (ThaiBMA), said this may signal a trend as Thai authorities have done a good job in curbing the Covid-19 contagion. He was referring to the number of new confirmed cases sticking to single digits for several days and moves being made to gradually relax lockdown restrictions.

The baht has also been fluctuating at around Bt32 per dollar over recent days.

“A quick appreciation of the baht may hurt Thai exports given that the global economy has not yet recovered from the virus fallout,” he warned.

Ariya Tiranaprakit, executive vice-president of the ThaiBMA, said about 10 companies have applied with the SEC to issue corporate bonds to raise about Bt50 billion combined over the next few weeks.

The bond issuing plan has risen substantially in value after previous plans were delayed, she said, adding that this suggested that investors’ confidence has returned to the bond market after it was hit hard by the crisis.

Most investors sold their holdings last month and put the cash in banks. However, liquidity has started coming back, but it will take a while before things return to normal, she added.

Corporate issuance year-to-date is worth Bt200 billion, up from Bt150 billion in the first quarter, she said, conceding that the issuing of corporate bonds this year will not meet the previous projection of Bt800 billion to Bt850 billion.

“The raising of funds via private debt instruments will depend on the latest update on the Covid-19 pandemic and the easing of restrictions,” she added.

Separately, Ruenvadee Suwanmongkol, SEC’s secretary-general, has established a 17-member committee responsible for oversight and development of the bond market. The committee is expected to help the SEC develop high-yield bond fund among other priorities.

Meanwhile, Paiboon Narintarangkul, chairman of the Federation of Thai Capital Market Organisations (Fetco) was optimistic the local equity market is on a rising trend. The Stock Exchange of Thailand Index is also expected to rise to 1,400 this year or up 10 per cent from the current level.

Global liquidity pumped by central banks and governments across the world teamed with Thailand’s success in the management of the virus will support the local bourse, he said.

However, he said, in the short-term the index will not rise much as investors are still worried about a second wave of infections and are waiting to see the impact of stimulus packages.

The crisis has caused the SET market cap to lose up to Bt3.2 trillion, the GDP has dropped by Bt1 trillion early this year and analysts are expecting corporate earnings to drop by 30 percent this year.

The SET index closed at 1,287.30, up 21.28 points or 1.68 percent, with trade volume of Bt56.8 billion. Local institutional investors have aggressively bought shares in the energy and banking sectors.