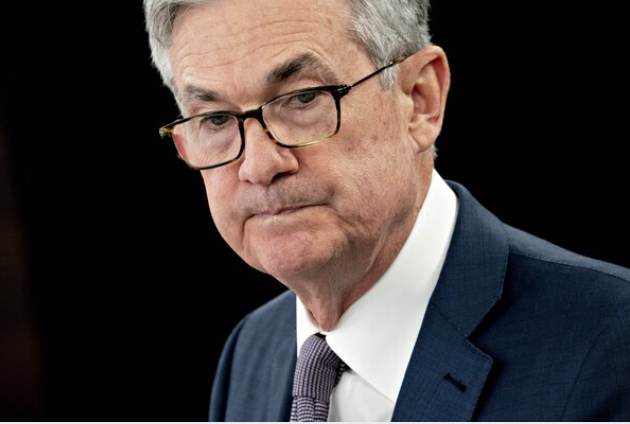 Jerome Powell, chairman of the U.S. Federal Reserve, during a news conference in Washington, on March 3, 2020. MUST CREDIT: Bloomberg photo by Andrew Harrer.

The U.S. economy faces unprecedented risks from the coronavirus if fiscal and monetary policymakers don't rise to the challenge, Federal Reserve Chair Jerome Powell said while pushing back against the notion of deploying negative interest rates.

"The recovery may take some time to gather momentum, and the passage of time can turn liquidity problems into solvency problems," Powell said Wednesday in remarks to a virtual event hosted by the Peterson Institute for International Economics in Washington. "Additional fiscal support could be costly, but worth it if it helps avoid long-term economic damage and leaves us with a stronger recovery."

Powell and his colleagues on the policy-setting Federal Open Market Committee have taken dramatic measures to shelter the U.S. economy during the coronavirus pandemic. They have cut their benchmark interest rate to nearly zero, engaged in open-ended bond buying and begun rolling out emergency lending programs as U.S. unemployment has soared to levels not seen since the 1930s Great Depression.

Some investors have speculated the Fed might follow other central banks in taking interest rates into negative territory to spur spending, with interest rate futures indicating a small chance it might happen. Powell acknowledged the discussion but said it was not being considered, though he stopped short of ruling the tool out as an option in the future.

Traders of fed funds futures pushed bets on a negative policy rate into next year after Powell's comments.

The Fed chair in his speech outlined the worrying scenario posed by mass bankruptcies and unemployment while asserting that policymakers may have to do more to prevent these from coming to pass. He said the Fed would publish a survey Thursday showing almost 40% of Americans in households making less than $40,000 a year had lost a job in March.

"Long stretches of unemployment can damage or end workers' careers as their skills lose value and professional networks dry up, and leave families in greater debt," Powell said. "The loss of thousands of small- and medium-sized businesses across the country would destroy the life's work and family legacy of many business and community leaders and limit the strength of the recovery when it comes."

Congressional lawmakers and President Donald Trump's administration have passed almost $3 trillion in economic relief measures, including $454 billion to serve as a backstop for the central bank's emergency programs. Democrats and Republicans are currently talking about another round of aid, including measures to shore up state and local governments whose tax revenues have been decimated by stay-at-home orders that have shuttered entire sectors of the economy.

"While the economic response has been both timely and appropriately large, it may not be the final chapter, given that the path ahead is both highly uncertain and subject to significant downside risks," Powell said.

In an unprecedented step, the Fed this week also began buying exchange-traded funds invested in corporate debt to support liquidity in the market where large companies borrow.

Powell added that the central bank would "continue to use our tools to their fullest until the crisis has passed and the economic recovery is well under way," but cautioned that it could only make loans and not spend money.

"When this crisis is behind us, we will put these emergency tools away," he said.