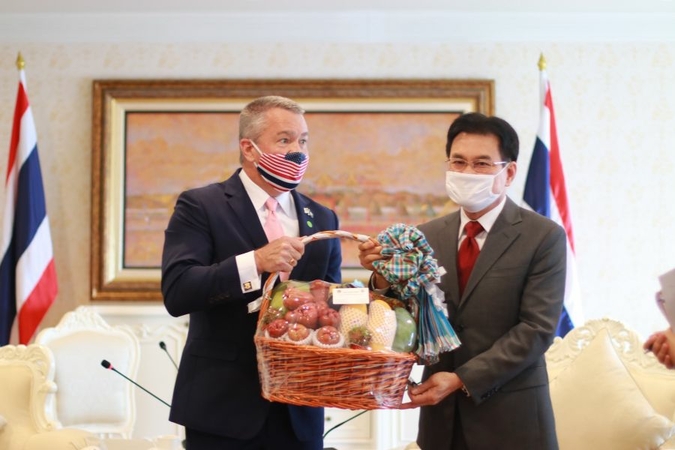 In a meeting with the commerce minister on Wednesday (May 13), US ambassador said his country was ready to push for Thailand to become an investment base for American investors and was also ready to remove the Kingdom from the intellectual property watch list.

Thailand, meanwhile, is pushing for larger exports of agricultural products to the US.

After the meeting with Ambassador Michael George DeSombre, Commerce Minister Jurin Laksanavisit said the envoy complimented the Thai government for its proactive measures in tackling the Covid-19 crisis and said his country was ready to back the move of production bases to Thailand.

Jurin, meanwhile, called on the ambassador to push for the US production sector to use more raw materials from Thailand, such as rubber, rice as well as digital content. He also asked the envoy to look into the release of perishable goods, such as fruits and beverages that are stuck in different ports across the US.

The minister called on the diplomat to help coordinate with social-media platforms such as Facebook, Instagram and Twitter to prevent the sale of illegal products, such as medical masks, in Thailand, and urged him to have the US private sector participate in the May 25-27 digital content trade show that his ministry has organised.