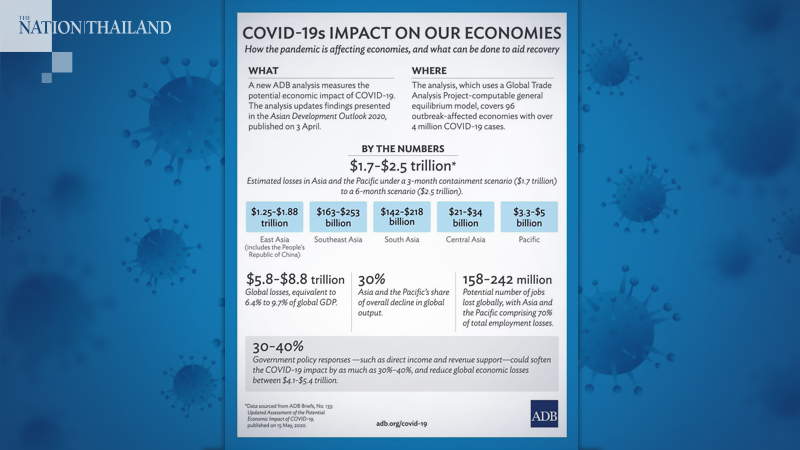 The global economy could suffer between US$5.8 trillion and $8.8 trillion (Bt186.24 trillion and Bt282.57 trillion) in losses, equivalent to 6.4 to 9.7 per cent of the global GDP, as a result of the Covid-19 pandemic, a report released by the Asian Development Bank says.

The report, “Updated Assessment of the Potential Economic Impact of Covid-19”, which was released on Friday (May 15), shows that economic losses in the Asia-Pacific region could range from $1.7 trillion in a three-month scenario, and up to $2.5 trillion in a six-month scenario, with the region accounting for 30 per cent of the overall decline in global output.

China alone could suffer losses of $1.1 trillion to $1.6 trillion. The new report updates findings presented in the Asian Development Outlook (ADO) on April 3, which estimated that Covid-19’s global cost would range between $2 trillion and $4.1 trillion.

However, governments worldwide have been quick in responding to the impact of the pandemic by implementing fiscal and monetary easing measures, increasing health spending and providing support to cover losses in income and revenue. Such sustained efforts could soften Covid-19’s economic impact by as much as 30 to 40 per cent, and thus reduce global losses to between $4.1 trillion and $5.4 trillion.

The analysis covered 96 outbreak-affected economies with over 4 million Covid-19 cases and found that in addition to delivering shocks to tourism, consumption, investment, as well as trade and production links, the pandemic has also increased trade costs affecting mobility and other industries as well as supply-side disruptions that adversely affect output and investment.

“It also highlights the important role policy interventions can play to help mitigate damage to economies. These findings can provide governments with a relevant policy guide as they develop and implement measures to contain and suppress the pandemic, and lessen its impacts on their economies and people.”

Under the short and long-term scenarios, the report notes that border closures, travel restrictions, and lockdowns that outbreak-affected economies implemented to arrest the spread of Covid-19 will likely cut global trade by $1.7 trillion to $2.6 trillion. Global employment decline will be between 158 million and 242 million, with Asia-Pacific region comprising 70 per cent of total job losses. Labour income across the world will drop by $1.2 trillion to $1.8 trillion – 30 per cent of which will be felt by economies in the region, or between $359 billion and $550 billion.