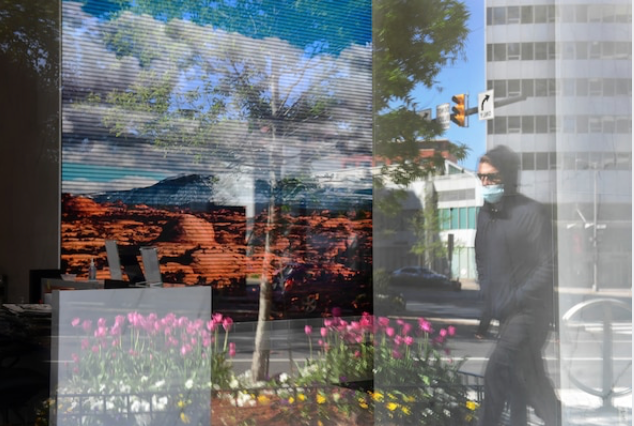 A pedestrian wearing a mask and blooming flowers are reflected in an office building as a large screen displays nature scenes on April 16, 2020 in Arlington, Va. MUST CREDIT: Washington Post photo by Matt McClain

Even as most Americans spent the past two months hiding indoors, Damion Campbell has been rushing into retail and grocery stores in Columbia, South Carolina, each day.

The 45-year-old owns an information technology company, and his clients rely on him to keep their cash registers operating. Just a few months ago, Campbell didn't think much about touching surfaces that may not have been washed for days or longer, or chatting with employees while he does his work.

But now, Campbell finds himself applying his military training to his civilian job. In the age of the novel coronavirus, that means stocking up on disinfectant wipes, always wearing a mask and never staying in one location for more than an hour, he said.

"You keep your head at the swivel, be aware of your surroundings, and avoid patterns," said Campbell, referring to lessons he learned as a Marine deployed to Iraq nearly two decades ago. "You are constantly looking over your shoulder."

With tens of millions of Americans preparing to return to work as more states relax stay-at-home orders, Campbell's experiences offer a preview of the new challenges that businesses and employees will soon face as commerce begins reopening in a new era of anxiety and apprehension.

A Washington Post-Ipsos poll of more than 8,000 adults in late April and early May found that nearly 6 in 10 Americans who are working outside their homes were concerned that they could be exposed to the virus at work and infect other members of their household. Those concerns were even higher for some: Roughly 7 in 10 black and Hispanic workers said they were worried about getting a household member sick if they are exposed at work.

Nearly 1 in 3 Americans - and over half of those with jobs - have continued to leave the house for work at least once a week as the virus has spread and states have issued stay-at-home orders, the poll found. More than one-third of people still going to work said they or a household member has a serious chronic illness, and 13% said they lack health insurance themselves.

Nearly 8 in 10 Americans leaving home to work said their employers were doing enough to keep them safe, with a similar majority saying their work is "essential" and about 7 in 10 feeling appreciated for it.

But more than a third said they had probably been exposed on the job already.

"I was really sick, with all the symptoms back in late January," said Bud Benedix, 60, a truck driver from suburban Chicago who was never tested for coronavirus, but believes it was circulating in the United States far earlier than official estimates. "Where I could have got it? I have no idea."

The Post-Ipsos poll found that amid stay-at-home orders, people who continued to commute each day worked in a wide array of industries. Health-care workers accounted for 10% of people still leaving for work, 7% apiece worked in sales and office and administrative support, and another 6% prepared food. Blue-collar workers left home for work at higher rates than others, including those performing installation, maintenance and repair, transportation and construction.

Of the nearly half of employed Americans who were not going to an office or job site, nearly 9 in 10 are in white-collar industries.

As those workers now prepare to start leaving their homes, follow-up interviews with poll respondents revealed a host of concerns about how they will stay safe on the job. They worry about using mass transportation, how they will interact with colleagues and clients, and whether they could bring the virus home to other family members, including those who suffer from preexisting health conditions.

Denise Gonzalez, a 34-year-old landscape designer in Santa Ana, California, has been largely isolated in her house with two elderly parents, including her diabetic mother, since Gov. Gavin Newsom, D, ordered residents to stay home in early March.

Gonzalez wonders whether her office will establish protocols for the field crews who used to frequently come in and out of the office in between jobs.

In Wisconsin, preschool teacher Andrea Velasquez has also been staying home due to the closure of schools in her state, making only brief excursions to pick up supplies.

Velasquez, 42, does not think she will have to return to work until at least the fall, but she already wonders how her job will be different when she is back in the classroom.

Some things, Velasquez expects, won't be that different. Most preschool teachers are already diligent about frequently washing their hands and sanitizing, she noted.

But when it comes to other fundamental parts of the job, such as interacting with parents and other teachers, Velasquez is still waiting for state and local educational associations to issue extensive guidelines for how to stay safe.

"In the past, a lot of teachers have gone to work sick because they feel guilty if they stay home," Velasquez said. "Some kids have, too, and we all have to learn how to change that and follow new protocols."

Some Americans who have already gone to work caution that those about to follow them should be prepared for added stress.

Hannah Rodriquez, 23, has been reporting to her job as a lab technician in Minneapolis. Her employer has implemented additional safeguards, such as checking employees' temperatures when they arrive.

But Rodriquez said working around colleagues amid a pandemic has proved to be "more exhausting" than she would have expected. In addition to the heightened concern about how to best to protect her own health, Rodriquez said she finds it challenging to sift through the varied opinions that her co-workers have about whether the virus is dangerous.

"You have some people really anxious and really upset about what is going on, and others who think it's a huge overreaction," Rodriquez said. "That makes it even more stressful for everybody."

Although there has been at least one coronavirus case reported in most U.S. counties, Americans have different perspectives on returning to work.

In Fargo, North Dakota, Stephanie Pearson, 30, noted her county has had only 76 confirmed coronavirus cases, and it has lower density than many major American cities. And as a healthy, young adult, the engineer said she may be among the first to be called back to work when her office reopens.

"I think we all will just have to use our best judgment, as to what is right for our personal situations," Pearson said. "I sit in a fairly large cubicle, so I do not have any concerns about returning."

But in northern Virginia, a government employee who would identify himself only by his first name, Olufemi, is worried that he won't be able to safely get to his job in the Washington. Olufemi already had a fever earlier this year, which he believes he could have contracted while riding the subway to work.

"I worry if you take the Metro, you run a high risk of being exposed to it," said Olufemi, adding he could not afford to drive to work every day when he factors in the cost of parking downtown. "And even if you don't take the Metro, when you go into buildings, how many people are you going to come into contact with on the elevator on a daily basis?"

In recent weeks, many cities and states have begun urging, and in some cases mandating, that residents wear a protective face covering when outdoors. Some employers are also expected to require employees to wear face masks in office settings.

The Post-Ipsos poll found mask-wearing is scattershot at workplaces: 35% of people leaving home to go to work reported wearing a mask at all times, 39% said they wore a mask some of the time or occasionally, and 26% never wore one.

More than 4 in 10 women said they wore a mask all the time at work, compared with about 3 in 10 men.

An 81% majority of Americans said workers at businesses that are open should be required to wear masks, a figure that dips to 73% among those who have been leaving home for work during the outbreak. Almost as many support mask requirements for customers.

Brett Giordano, 47, works as a commercial helicopter pilot in Trophy Club, Texas, and he still flies clients a few times a week.

Giordano said he will wear a face mask while flying if a client asks him to, but he usually doesn't see the virus as a major threat to his health. He believes state governments are overreacting by shutting down business and mandating mask use.

"If someone came aboard sneezing and coughing, I might say, 'I think you need to get looked at,' " Giordano said. "But it's kind of hard to fly with a mask on, because talking into the microphone with one is kind of hard."

The poll also provides the first nationally representative look at what actions employers are taking to protect workers.

Just over 7 in 10 said their employer provided them with face masks, more than 8 in 10 were provided hand sanitizer, and roughly 9 in 10 had access to soap and water for hand-washing.

Rikki Johnson, 58, works in the records unit of a prison in central Virginia that holds about 700 inmates.

Although prisons nationwide have struggled with large outbreaks in recent weeks, Johnson said his facility so far has no reported cases.

Prison administrators have been diligent in making "people wear face masks, stay socially distanced" and give employees staggered or limited shifts to reduce the chances that they could come in contact with the virus, said Johnson, who lives in Orange County in the Shenandoah foothills.

Johnson worries, however, that too many other businesses will try to reopen too quickly, potentially endangering essential workers like himself who have been commuting to work each day.

"I think governors and federal officials need to map out a better plan, including more testing," said Johnson, 58. "I think our plan right now is a bit like 'Helter Skelter' and like gambling with dice."

Johnson is African American, and the poll found that black and Latino Americans were more worried than white workers about the conditions they will face in the workplace. Nearly half of black men think they may have already been exposed to the virus at work, compared with just over 3 in 10 white men.

Campbell, the former Marine, believes he may have been exposed to coronavirus when he took a series of work-related trips in February, including to New York.

But he never developed symptoms, was never tested, and isn't about to let down his guard down now.

"The biggest thing you got to learn is that you can't control somebody else," said Campbell, who has been stocking up on gallon-sized jugs of hand sanitizer.