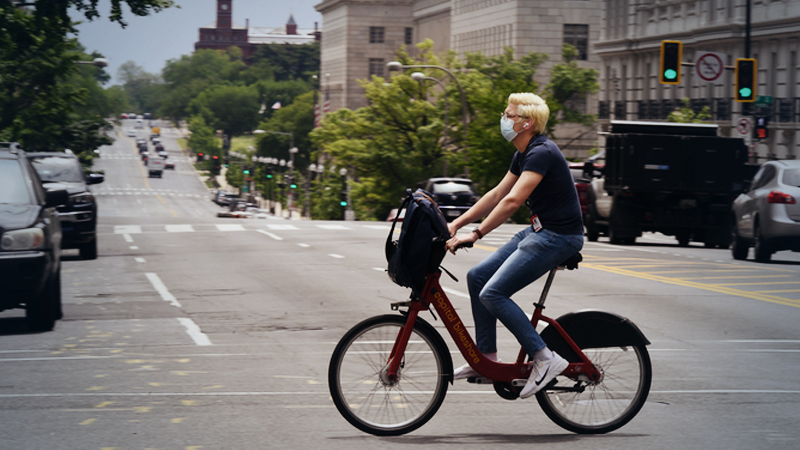 A bicyclist with a mask rides a bike from Capital Bikeshare as he crosses town in the District of Columbia. MUST CREDIT: Washington Post photo by Matt McClain

While it's unclear when Americans will return to life as normal following the coronavirus pandemic, experts are fairly certain work habits will change dramatically, with more people returning to solo car commuting and more teleworking to protect against infection.

Bikeshare and e-scooter companies are hoping to capitalize on the public's need for social distancing and come back stronger than before the pandemic when the devices were ubiquitous on streets and sidewalks around the country.

Cities are hoping for a resurgence in the modes to avoid a return to pre-pandemic traffic levels and to help fill gaps left as most public transit systems continue to provide reduced service.

"Given the choices we have, [bikes and scooters] seem to be the much safer modes of transportation. You are able to social distance yourself and still have a means to get to where you need to get to without a car," said Ashish Kabra, a professor at the University of Maryland School of Business who studies shared transportation.

There are early indications that use of bikes and scooters is already increasing. Bike and scooter sales are up, according to reports, and operators of rental services are reporting ridership has picked up and new riding patterns: People are using the bikes and scooters to make longer trips, rather than shorter rides to connect to transit.

Once people return to work, industry leaders and experts are projecting that commuters may feel a greater sense of protection against the virus using personal and shared bikes and scooters than taking public transit or services such as Uber or Lyft.

Industry officials say they, like those in other transportation sectors, have taken extra cleaning measures and will maintain more rigorous disinfecting routines. They also plan frequent reminders to users about good hygiene practices while riding, such as washing their hands after their trips.

Subsidized bikeshare programs, such as the popular Citi Bike in New York and Capital Bikeshare in the Washington, District of Columbia, region, continued to supply transportation during the pandemic, and some systems including Citi Bike have seen such increased demand during the pandemic that they are planning expansions.

The District Department of Transportation is planning to add 30 new Capital Bikeshare stations this year, though officials declined to say whether the service faces any budget uncertainties as a result of the health crisis.

DDOT Director Jeff Marootian said Capital Bikeshare remains a central piece of the city's transportation system and plans to expand its access to as many people as possible. Marootian also said the city is ready to be flexible to allow private rental services to expand if demand grows.

The city also plans to continue to promote the use of car alternatives to avert increases in vehicle traffic and setbacks to environmental and traffic safety goals.

Several cities around the country, including Seattle and Oakland, are encouraging bike, scooter and pedestrian traffic by shutting down some streets to vehicles.

Some cities are also easing regulations on scooter and bike operators. Portland is offering incentives for residents to use scooters through a partnering with Spin. The city allowed Spin to add more scooters to its fleet and temporarily waived fees in exchange for Spin cutting the cost of its rides by half.

Across the Atlantic, the United Kingdom earlier this month announced a multibillion-pound plan to boost cycling and walking during and after the lockdown and fast-tracked a program to allow e-scooters on U.K. roads as early as next month - nationwide - instead of in just a few cities. Montreal, Paris and Milan have built temporary bicycle and pedestrian facilities as part of their coronavirus response.

"This is the moment really to encourage as many people who are interested and are willing to try bikes or scooters to do it and to set up the infrastructure and support them," said Greg Billing, executive director of the Washington Area Bicyclist Association. He said there is already a renewed interest in biking amid the pandemic.

David Spielfogel, chief of policy at Lime scooters, said the company is working closely with cities to beef up their operations and ensure access and availability is widespread when commuters return.

"Cities are demanding change more quickly," Spielfogel said. "Local governments are desperate for open air mobility options that allow for social distancing, and they're quickly turning to bikes and scooters."

Most private rental operations shut down amid the health crisis, and while some have returned, they are in only a fraction of their pre-pandemic markets.

The pandemic has driven some of the scooter and bike start-ups to the brink of financial ruin. And for some of the bigger companies that hoped to turn a profit, those plans have been derailed, too. Lime, which had already announced layoffs early in the year, laid off 13 percent of its global workforce in late April. Its competitor, Bird, laid off nearly one-third of its 1,400 employees in late March, giving workers the bad news in a 2-minute message via Zoom, according to The Verge.

Uber and Lyft have also laid off hundreds of employees combined, affecting their scooter and bikeshare operations.

Last week, Uber offloaded Jump, its bike and scooter business, to Lime as part of a $170 million investment. The deal ensures Lime has "the resources to not just weather covid, but to have the runway to reach full company profitability, which we expect to do in 2021," Spielfogel said. And by absorbing Jump into its operations, Lime's fleet will grow significantly. However, it remains to be seen whether that's a benefit to the company when Jump was losing $60 million a quarter.

Even before the crisis, scooter and bike rental companies had started to pull out of some markets. Officials with Lime and Bird said they are now evaluating what markets they will return to as demand grows.

"My guess is some of the smaller companies, if they don't go out of business, they'll be acquired," said Sarah Catz, a research associate at the University of California at Irvine's Institute of Transportation Studies. As a whole however, the industry, she said, "will be a survivor from the pandemic and come out stronger."

In places where private scooter and bike operators remained or have resumed service, officials said they are seeing promising ridership trends. In South Korea, Lime ridership is up 14 percent compared to pre-pandemic levels, according to the company.

Lime is operating in 20 of the about 120 global markets - including cities and college campuses - where it was operating before the pandemic.

In Columbus, Oklahoma City and the District, companies report users are taking scooters for longer rides, signaling that riders are making their full commutes on the devices rather than for first-mile, last-mile trips.

Bird, which returned to the streets of the nation's capital this month after weeks weathering the pandemic, said demand is in-line with pre-pandemic numbers.

The District is one of a few markets where Bird has resumed operations; the company was in more than 100 locations before the health crisis.

"We're able to limit or decrease the number of individuals using public transit while at the same time providing an option that is a responsible social distancing mechanism. You're one individual on one vehicle at one time," Hahn said. "And that allows us to adhere to these social distancing guidelines that I imagine will be in place for quite some time."

Those in the industry say they want to support local governments in their goals, and work with cities during society's reopening and after public transit comes out of the crisis. Cities and the industry agree that micromobility options can alleviate some of the crowding on trains and buses. Some transit systems, including Metro, have said they don't plan to resume normal operations for months while they look to enforce social distancing aboard trains and buses.

If the early days of the crisis offer any lessons, she said, it is that people in major cities turned to bikes and scooters to get around as transit systems began to reduce service and more people grew concerned about riding in crowded trains and buses.

"Shared mobility continued to be a viable option for those people that had to move around" at the onset and during the pandemic, she said, noting that bikeshare and scooter systems that remained in operation during pandemic were critical to support hospital and other essential workers.

"It is a great transportation option for folks as states and localities start to reopen."