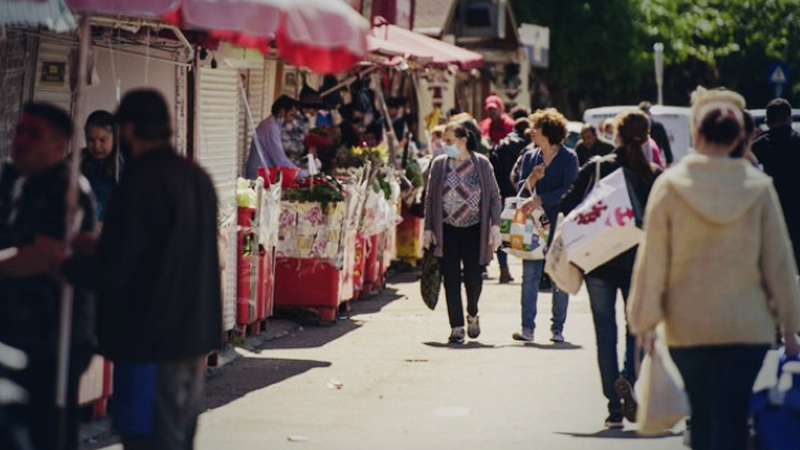 Shoppers wearing protective face masks while browsing fruit and vegetable stalls at an open air market in Bucharest, Romania, on May 5, 2020. MUST CREDIT: Bloomberg photo by Ioana Epure.

After covid-19 killed the elderly woman Mihaela Danaila had been taking care of for nine years in northern Italy, she joined a rush of about 1.3 million Romanians working abroad and headed home.

The 37-year-old had been part of a steady exodus west after the continent's ex-communist contingent joined the European Union. Open borders allowed doctors, engineers and builders to garner higher salaries elsewhere, escaping corruption and poor health care in the process. The shift helped richer countries struggling with aging populations but left the workers' homelands scrambling to fill jobs.

The virus has reversed a chunk of the migrant flows almost overnight: eastern countries now have an abundance of workers. The question is whether they'll stay. While wages haven't caught up, the region suffered far fewer Covid-19 deaths than western Europe and governments in Romania, Ukraine and Serbia are keen to retain at least some of those who've come back. People like Danaila may stick around.

"I don't want to return to Italy because life among strangers is hard," she said. "I'll see what happens in the next few months. If I manage to get a job here, that would be great."

Looking for employment right now is tough as eastern Europe's boom of recent years becomes what's shaping up to be its deepest slump since the fall of the Iron Curtain. But despite hitting records, unemployment isn't seen reaching the levels of places like Italy and Spain.

Romania -- which lost at least 4 million citizens to emigration since joining the EU in 2007, more than any other member-state -- reckons at least a third of those who have returned are actively looking for jobs and can help power construction, agriculture and industry in the coming years. One initiative is targeted at them: a 40,000 euro ($43,350) grant to start a farm.

"It's a priority for the government to retain these people -- we'll do it through investments, by creating new jobs," Finance Minister Florin Citu said. "Before the crisis, many companies complained that they can't find workers. Now, the workforce is here and we need to support it."

In Ukraine, President Volodymyr Zelenskiy has longed to lure back those who left after the EU granted visa-free travel in 2017. As many as 1 million were in Poland alone before the crisis struck.

While there's been less of a rush home than in Romania, Ukraine's central bank estimates that about 300,000 people returned during lockdown -- 10% of the total. One program will offer them cheap loans to start businesses. A 'Great Construction' project to upgrade roads will add 170,000 jobs.

Companies looking to fill seasonal positions in the U.K., Finland and Germany with Ukrainians are also facing a tougher time. They must provide medical insurance and contracts of at least three months.

In Serbia, President Aleksandar Vucic says about 400,000 workers have arrived home amid the pandemic, most having lost temporary jobs and social and health insurance. The inflow is equivalent to 6% of the population and a fifth of the workforce. Officials have urged them to take jobs in agriculture.

Not all eastern European nations have seen big influxes. Poles, who make up the biggest foreign group in the U.K., are largely settled and have remained where they are. It's a similar story for the Baltic region, which has been among the worst-affected by mass emigration since the collapse of the Soviet Union.

And those who have come back did so for an array of reasons -- Easter being a big one. Bulgaria is a case in point. While 360,000 citizens returned since February, 285,000 have left again. Data later this year on remittances, which reached $12 billion in Ukraine in 2019, will paint a clearer picture.

"In the short term, the impact will be on higher social spending for the state because the economy won't be able to absorb everyone," said Dan Bucsa, an economist at UniCredit Bank. "It's very likely most will leave again once the situation calms down."

Romania, like most countries, has enough to worry about with the virus, having suffered more than the other eastern EU members. But if officials can find time and resources to reach out to people like Danaila, it may be better off once the economy overcomes its slump.

"I have a 12-year-old son who's the main reason I want to stay," she said. "Being away from him has been the most difficult thing I ever did but when I look at the things he has now -- a computer, clothes, everything he needs -- I realize that with the wages in Romania I'd never have afforded it all. People say things have changed here as well. I'll see."