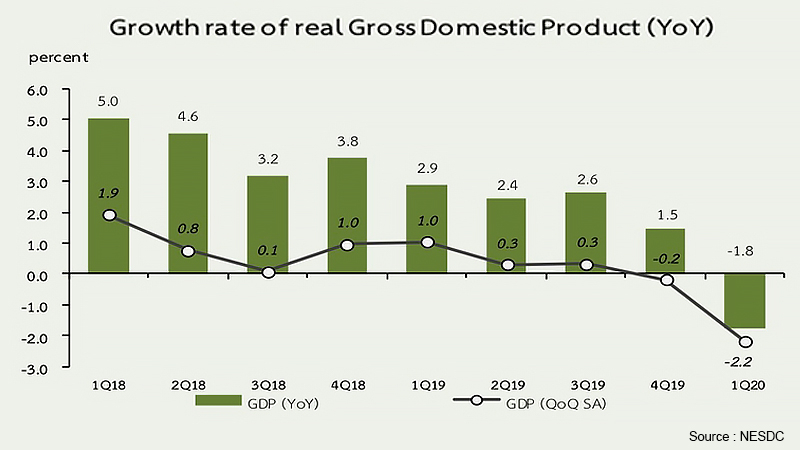 The economy sank by 1.8 per cent year on year in the first quarter, state think-tank the National Economic and Social Development Council (NESDC) said today (May 18).

The economic contraction in the first quarter was largely due to the Covid-19 fallout, said secretary-general Thosaporn Sirisumphand.
In it’s full-year forecast, the Council said the economy would drop by 5 to 6 per cent, close to the 7.6 per cent contraction during the 1997 financial crisis.
The Gross Domestic Product in the first quarter dropped by 1.8 per cent, compared to a rise of 1.5 per cent in 2019 Q4, as a result of the decrease in exports of goods and services, private and public investments and the government’s final consumption expenditure. However, the private final consumption expenditure grew at a decelerated rate, according to the NESDC.
On the production side, the agricultural sector decreased by 5.7 per cent, due mainly to the drought. The non-agricultural sector decreased by 1.4 per cent, in contrast to a rise of 2.0 per cent in 2019 Q4, resulting from the manufacturing sector falling by 2.7 per cent and a reduction of the services sector by 1.1 per cent , compared to a drop of 2.2 per cent and a rise of 4.1 per cent in the previous quarter, respectively. The services sector reduction was mainly because of the decreased number of tourists, which has hit related sectors, particularly affecting transportation and storage, and accommodation and food service activities.
Meanwhile, key services sectors such as wholesale and retail trade, vehicle and motorcycle repair, information and communications, and real estate showed decelerated growth.
As for expenditure, private final consumption expenditure grew by 3.0 per cent, compared to a 4.1 per cent growth in 2019 Q4. However, government final consumption expenditure, gross fixed capital formation, exports and imports of goods and services contracted by 2.7, 6.5, 6.7 and 2.5 per cent, respectively.
After seasonal adjustment, the economy declined by 2.2 per cent in the first quarter of 2020, the NESDC added.