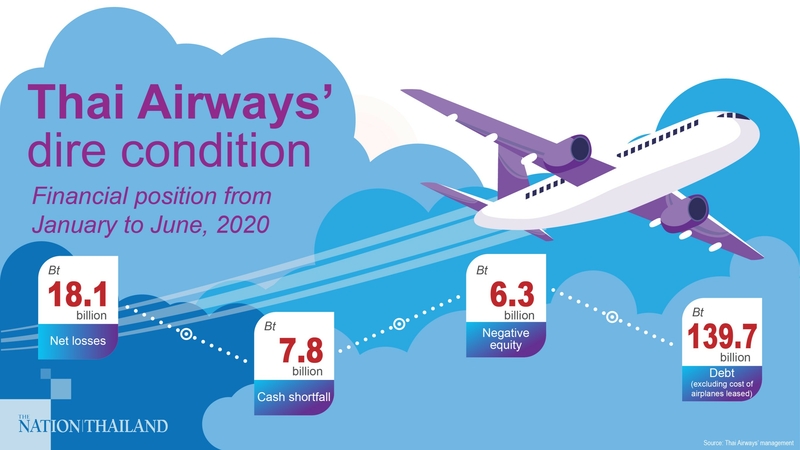 It is expected that the Cabinet will give the go-ahead to the rehabilitation of Thai Airways International (THAI) as per the Bankruptcy Court’s procedure at its meeting today (May 19). This could potentially result in the airline losing its status as state enterprise.

The State Enterprise Policy Committee, chaired by Prime Minister Prayut Chan-o-cha, decided on Monday to force the national carrier to file for bankruptcy and rehabilitation under the court’s process.

THAI is listed on the stock market and has been in financial trouble for many years, and now, with the Covid-19 crisis, things have become worse.

Deputy Prime Minister Anuthin Charnvirakul said THAI may lose its status as state enterprise once it starts going through the rehab procedures set by the Bankruptcy Court. Once that happens, the State Enterprise Committee will no longer have authority over the carrier, though the manager of the rehabilitation will have the power to manage the airline’s business restructuring plan.

The airline will be able to continue operating while its debts and businesses are being restructured, and it will not have to service debts during that time.

Narumon Pinyosinwat, government spokesperson, said it is still not clear whether the airline’s bankruptcy case will be filed in a Thai or foreign court.

However, an informed source at the Transport Ministry said the case should go to a Thai court even though 30 per cent of the airline’s Bt200 billion debt is owed to foreigners.

Some sources suggested that the government file the case in the United States in order to stop foreign creditors seizing THAI airplanes when they land on foreign soil.

The Transport Ministry source, however, said there should be no such problem if THAI can negotiate with its foreign creditors, most of whom have leased planes to the airline.

“The union agrees with the plan to rehabilitate via the Bankruptcy Court’s process, but we do not agree with the proposal to reduce the Finance Ministry’s stake by 2 per cent,” he said.

The Finance Ministry currently holds a 51.03 per cent stake in the airline, but if its holding is cut to below 50 per cent, THAI will no longer be a state enterprise.

Nares said he was worried that this would adversely affect the company’s credit rating and push up the cost of future borrowing.

Officials, however, say that once THAI becomes a private entity, it will find it easier to restructure by cutting redundant staff, slashing wages as well as cancelling perks offered to the local elite and efficiently managing its costs as a whole.

A recent news report suggested that the Finance Ministry may sell some of its stake to Vayupak Fund, an investment vehicle that was set up by the ministry, which will inject fresh funds into the airline.

Initially, THAI management had proposed that the Finance Ministry borrow Bt50 billion to finance the ailing airline, but the plan was rejected.