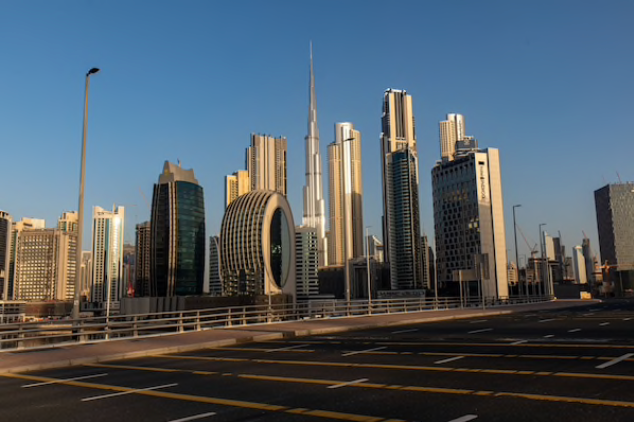 An empty highway leads past the Burj Khalifa skyscraper (center) and other office buildings on the city skyline during the coronavirus lockdown in Dubai, United Arab Emirates, on April 24, 2020. MUST CREDIT: Bloomberg photo by Christopher Pike.

Statistics are a poor guide to the crisis raging across Gulf Arab economies.

The region's second-biggest economy, the United Arab Emirates, has yet to disclose how it performed in the second quarter -- of last year. The statistics authority separately released an assessment of the U.A.E.'s full-year gross domestic product growth for 2019, without providing a quarterly breakdown.

Qatar published national accounts for the fourth quarter only in late April. Although faster than its neighbors, Saudi Arabia is scheduled to report the first quarter's GDP on the last day of June, some two months behind most of its counterparts in the Group of 20.

The delays are increasingly a source of frustration for investors, economists and rating companies -- especially at a time when the damage from slumping oil prices and the coronavirus pandemic is reshaping the outlook so fast that analysts can barely keep up. Statistics in some of the countries can be equally scarce on everything from budgets to wealth fund holdings.

Qatar's government communications office didn't provide a comment and the Federal Competitiveness and Statistics Authority of the U.A.E. didn't respond to questions. Saudi Arabia's General Authority for Statistics "has launched an internal project to have early GDP estimates by the end of the year," said its president, Konrad Pesendorfer.

With visibility so low, decisions can be hard to make, according to Ali Al-Salim, co-founder of Arkan Partners, a consulting company for alternative investments including hedge funds and private equity.

In the case of Abu Dhabi, the richest of the U.A.E.'s seven sheikhdoms, Moody's Investors Service last week said its "main credit challenges lie in a lack of institutional data transparency."

The World Bank has even argued that a lack of reliable data might have been costly enough to contribute to slow economic growth before this year's shocks. The Middle East and North Africa is the only region of the world that has seen an absolute decline in their index of data transparency between 2005 and 2018, according to a report in April.

As the crisis gained momentum last month, the U.A.E. tried to compensate for any shortage of information by asking manufacturers to take part in a survey to gauge the impact of the virus outbreak. The Finance Ministry also launched an online platform that it says is "dedicated to transparency in the U.A.E.," allowing the public to access studies, reports and statistics.

But given the lag in GDP figures and without enough high-frequency indicators to track the recent disruptions, consultancy Oxford Economics has looked for workaround solutions by using "non-traditional" sources of information, from Google location data to hotel occupancy statistics.

"Data limitations make it difficult to track the economic impact of the coronavirus pandemic" in the Gulf, said Scott Livermore, chief economist in the Middle East at Oxford Economics. "The challenges are particularly acute given the significant lags in releasing national accounts data."