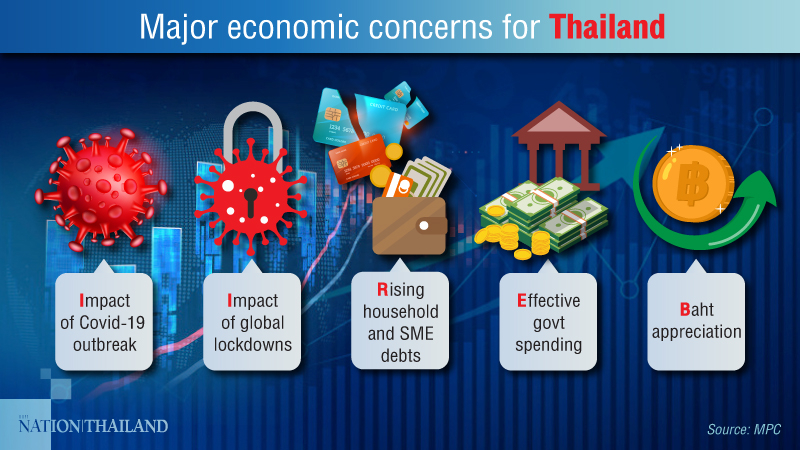 The Bank of Thailand’s Monetary Policy Committee (MPC) has cut the policy rate to shore up the sharply dropping economy, and is demanding that commercial banks accelerate their debt restructuring for consumers and SMEs. It has also advised the government to come up with well-targeted and timely fiscal spending.

In a 4:3 vote, the MPC decided to cut the policy rate by 0.25 percentage points from 0.75 to 0.5 per cent effective immediately, Titanun Mallikamas, secretary of the MPC, said after the committee’s meeting on Wednesday (May 20).

When deliberating their policy, the MPC said its assessment shows that the Thai economy will contract more than previously predicted due to the more-than-expected contraction of the global economy in line with the containment measures imposed worldwide, he said.

The central bank had previously predicted that the GDP would shrink 5.3 per cent this year, while the National Economic and Social Development Council had on Monday (May 18) forecast a contraction of 5 to 6 per cent.

However, some analysts say the contraction can go as far as 10 per cent.

Titanun, meanwhile, warned that headline inflation would be far more negative than previous assessed, and financial stability would be more vulnerable given the economic outlook.

The MPC as a whole agreed that financial institutions should work towards ensuring that debt restructuring, particularly for household and SME borrowers, be carried out on a wider scale. Furthermore, lending under the previously announced measures should also be accelerated to address liquidity problems in a targeted and timely manner, the MPC secretary said.

The Thai economy will contract further as tourism and exports have been affected far more than previous expected.

Domestic demand, both private consumption and private investment, will contract further due to higher unemployment caused by containment measures.

Nevertheless, financial and fiscal measures will help to partially alleviate liquidity problems of households and businesses as well as help the economy recover gradually, a press statement from the MPC said.

The MPC said properly targeted and timely fiscal measures remain vital to supporting employment and SMEs and will facilitate economic recovery and potential growth in the near future.

The annual average of headline inflation will move more into the negative this year than previously assessed due mainly to the lower energy prices, MPC said.

Core inflation will remain subdued at low levels. The committee, meanwhile, will monitor uncertainties pertaining to the global economy, while the relaxation of restrictions and the likelihood of a second wave of Covid-19 infections in Thailand, as well as the effectiveness of fiscal, financial, and credit measures, will affect recovery in the period ahead, MPC said.

The MPC has assured that financial markets have been exhibiting stability after the Bank of Thailand implemented stabilisation measures, including the setting up of the Corporate Bond Stabilisation Fund (BSF). Government bond yields have dropped and corporate bond yields in the secondary market are showing less volatility. Bond market functioning is increasingly returning to normal.

The committee will keep an eye on the savings cooperatives that may be affected by corporate bond investments. The MPC’s comment was prompted by the fact that some of them have invested in corporate bonds issued by Thai Airways International, which will apply for bankruptcy protection.

The MPC said that commercial bank loans have expanded, especially in terms of large corporate loans, while consumer loans have decelerated somewhat. Though the level of overall liquidity in the financial system remains ample, it is important that the liquidity is distributed to businesses and households affected by Covid-19. Commercial banks’ lending rates have declined following the previous policy rate cut and the temporary reduction in the Financial Institutions Development Fund (FIDF) contribution.

Worry on appreciation of the baht

The baht has appreciated against the US dollar and regional currencies. The MPC has expressed concern that the baht could strengthen further and affect economic recovery. Therefore, developments in financial and foreign exchange markets warrant close monitoring.

The financial institution system remains sound. Commercial banks have robust capital and loan-loss provision levels. Nevertheless, there remains a need to monitor risks that may pose vulnerability to the stability of the commercial bank system in the period ahead, particularly defaults by businesses and households after the phasing-out of liquidity support measures. The committee believes that financial institutions will need to accelerate debt restructuring for borrowers and expedite credit extension under various measures previously announced. MPC also deems it necessary for the Bank of Thailand and other related regulatory agencies to prepare measures for coping with rising risks if the debt servicing capability of borrowers were to deteriorate more than expected, as well as ensure sufficient liquidity and continuation of well-functioning and stability of the financial institution system.

Looking ahead, the MPC will monitor developments of economic growth, inflation and financial stability, together with associated risks, including external risks, the impacts of the Covid-19 outbreak, as well as the adequacy of fiscal, financial, and credit measures, in deliberating on monetary policy ahead. The committee said it will stand ready to use additional monetary policy tools if necessary.