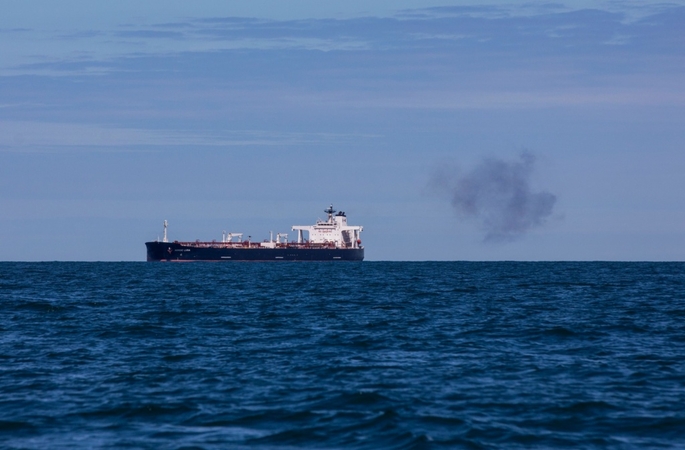 A puff of smoke blows away from the Nordic Luna, a Suezmax crude oil tanker operated by Nordic American Tankers Ltd., off the coast of Southwold, England, on May 15, 2020. MUST CREDIT: Bloomberg photo by Chris Ratcliffe.

Oil was headed for its longest run of daily gains since February 2019 after a drop in U.S. crude stockpiles added to signs that the market is starting to balance.

West Texas Intermediate futures rose for a sixth day in New York to above $34 a barrel. American inventories fell for a second week, with a record draw from the storage hub at Cushing, Oklahoma, according to U.S. Energy Information Administration data. European manufacturing data was better than expected, signaling a potential pick-up in demand.

With traders now more sanguine about the chance of storage space running out, the so-called cash roll for WTI in June/July traded at 30 cents on Wednesday, above zero for the first time since December, data compiled by Bloomberg showed. The biggest commodity index, run by S&P Dow Jones, will also return to its normal schedule of futures contracts rolls as stress eases.

Oil's rally so far this month has been accompanied by a sharp jump in prices for physical cargoes. While that highlights the market's strength, it threatens to hurt profits for refiners and also risks bringing some shuttered crude supplies back online.

"It's difficult to justify this strength, particularly when you see how weak refinery margins still are," said Warren Patterson, head of commodities strategy at ING Bank.

Although the large decline in stockpiles at Cushing, the delivery point for WTI futures, indicates the supply glut is starting to ease, a surprise increase in U.S. gasoline inventories reflected underlying weakness in the world's largest economy.

In Japan, Prime Minister Shinzo Abe said it may be possible to lift the state of emergency in Tokyo as early as Monday if current trends of new virus infections continue.

Meanwhile, India's state-owned fuel retailers said oil demand in the world's third-biggest consuming country may not get near a full recovery until the end of 2020.