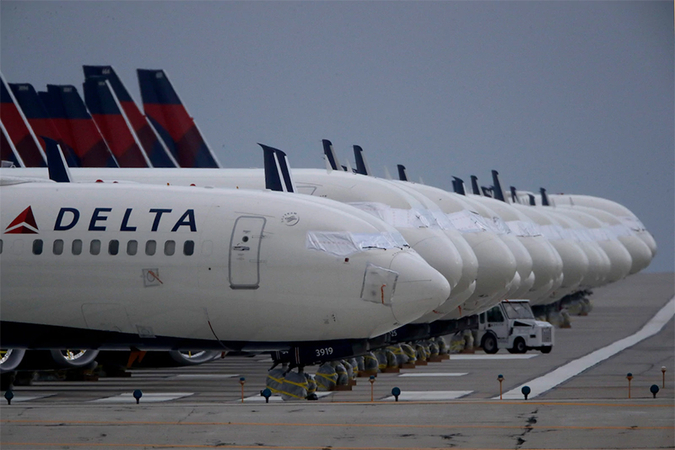 WASHINGTON - Lawmakers are criticizing Delta Air Lines and JetBlue for plans to cut employee hours, despite receiving more than $5 billion in government support as part of the federal coronavirus relief package.

In letters sent this week to the airlines' chief executives, more than a dozen senators wrote that plans to reduce employee hours violate the intent of the Payroll Support Program that was established as part of the $2 trillion Cares Act.

"Your decision to cut employee hours is inconsistent with congressional intent and is a blatant and potentially illegal effort to skirt you requirements to keep workers on payroll, and you should reverse this policy immediately," the senators wrote.

Under the Cares Act, U.S. airlines were eligible to receive more than $50 billion in grants and loan. Of that, $25 billion was in the form of grants that were to be used to keep front line workers such as flight attendants, pilots and mechanics on the job. In exchange for receiving the money, airlines had to agree to a number of conditions, including keeping workers on the job through Sept. 30.

Delta received more than $5 billion in grants as part of the program; JetBlue received $935 million.

But since the money began flowing, airlines and lawmakers have been at odds over the intent of the law.

United Airlines was the first to run afoul of lawmakers after it unveiled plans to reduce hours for some employees. The International Association of Machinists and Aerospace Workers, which represents the workers, sued the airline saying the reductions violated their contract and the Cares Act. The airline eventually backed away from the plan, making the reductions voluntary.

At a Senate Banking Committee hearing Tuesday, Sen. Elizabeth Warren, D-Mass., pressed Treasury Secretary Steven Mnuchin on whether his agency was doing enough to ensure companies that received money were keeping workers on the payroll.

In the letters, the senators noted that Delta "was reportedly the first airline to cut hours for employees after receiving assistance from the CARES Act. In the letter to JetBlue chief executive Robyn Hayes, the senators noted that since receiving Cares Act funding the airline has cut hours for mechanics, passenger service agents and ramp workers.

In both cases, the senators noted that company officials have said the "reductions in hours comply with the CARES Act."

They wrote: "This view is impossible to reconcile with the clear intent of the law."

The senators said that Delta and JetBlue should not accept any additional funds, "unless you are prepared to protect your workers' jobs, pay and benefits as intended by Congress in the CARES Act."

"Your federal financial assistance is conditioned on keeping your promises to workers," the letters concluded.